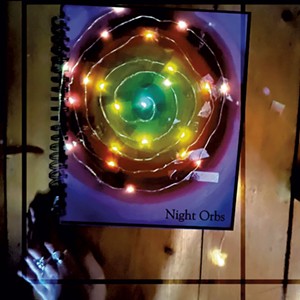 I've been having a recurring dream about a former roommate for years now. He died not long after he moved out, but I saw him once in the interim. I was walking along a wooded path when he appeared, smiling in the afternoon sun, immortal in that moment. We said hello and moved on, both of us unaware we'd never see each other again. Now, Brian appears every few months in my dreams, often looking just as he did that day on the trail, never with much to say but carrying some sort of unspoken message every time.

Brian's appearances in my dreams remind me of how instrumental music can stick in my brain and change over time. Without lyrics to etch themselves into memory, instrumentals linger in a slightly freer fashion than, say, pop songs. They lend themselves to emotional verisimilitude; they shift over time and age with one's feelings.

Night Orbs is a record full of such songs. The 11-track LP by Ben Campbell (Luminous Crush) and Caleb Elder (Sugarworks) plays out like a dream journal, colored by gentle piano figures and sweeping strings. Opener "JJ19" comes in like a story halfway through the telling, with Campbell's piano holding a conversation with Elder's violin that feels like it has been going on for years.

"Remote Start" shades into electronica as chords blip and shine like lights in the darkness over a programmed beat. But, more often than not, the music dwells in that realm of ambience built on austere beauty and deft use of space. "Sight of the Sound of the Cars" holds on to a pensive tone, similar to the way a filmmaker builds a scene, with little details slowly coalescing to form a prevailing feeling.

Yet my second and third listens of Night Orbs rarely felt like rewatching old scenes. The somber, gorgeous ballad "Astronaut's Resignation" hit wildly differently only a few days after my first listen. The stark, reverb-laden strikes of piano initially felt downright glacial alongside Elder's keening strings, but repeated listens revealed a warmth in the juxtaposition of the two instruments. Much like Brian appearing in the vistas of my mind, the song arrived as is, then expanded into its surroundings to color in the lines and flesh out its meaning.

The strength of Night Orbs lies in how Campbell's chord structures interact with Elder's ethereal work on the violin and viola. Elder, who also serves as a state representative in Addison County, has a knack for using strings to inject a powerful sense of the dramatic into the compositions. That tendency to spice up the proceedings plays off Campbell's delicately constructed songs, such as "Dark Downhill Corridor," a tune built so tightly it sounds like a clock ticking.

Campbell and Elder have created an album that serves as a soundtrack to a night of deep sleep. Like a lost friend reappearing in your dreams, its songs can haunt you and take on new meanings, which is a powerful sort of alchemy.

Listen for yourself at saintalbums.bandcamp.com.