Ben & Jerry's to Monsanto: Paws Off Our Label! 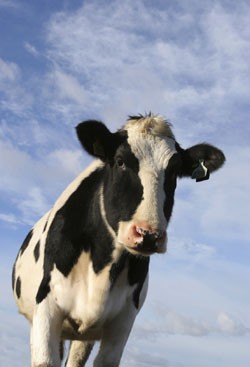 Next time you pick up a pint of Ben & Jerry’s ice cream, check out the backside label: “We oppose Recombinant Bovine Growth Hormone,” it begins.

The genetically engineered growth hormone rBGH — also known as “rBST” — is manufactured by the Missouri-based agribusiness giant Monsanto Corporation. About one in five dairy cows nationwide are treated with rBGH; up to 40 percent of Vermont’s milk supply could contain it. The hormone, which may increase the risk of cancer in lacto-loving humans, is banned in the European Union, Japan, Canada and Australia.

The U.S. Food and Drug Administration approved rBGH in 1993, but left further regulation up to individual states. Anti-rBGH companies such as Ben & Jerry’s require selected suppliers to sign affidavits ensuring they don’t use the hormone. But now, bending to Monsanto lobbyists, some Northeastern and Midwestern states are considering legislation that would make it illegal to label U.S. dairy products “rBGH-free.”

Not surprisingly, both the Waterbury-based ice-cream maker and the Northeast Organic Farming Association of Vermont (NOFA-VT) are having a cow. In recent weeks, both have submitted written complaints to Governor Edward Rendell of Pennsylvania, where labeling restrictions may take effect February 1.

Byron Moyer is dairy section chief at the Vermont Department of Agriculture, Food & Markets. He says the chance of similar legislation passing here is “slim to none.” In the late 1990s, Vermont had a “mandatory” rBGH labeling law and currently abides by a “voluntary” one. Interestingly, though, Moyer and a spokesperson from a major Ben & Jerry’s supplier refuse to comment on both the pending Pennsylvania law and the health debate surrounding rBGH.

“In terms of any positions on what’s transpired in the marketplace, we’re solely in the position of supplying our customers with the milk they’ve requested,” notes Tom Gates, Cooperative Relations Manager at St. Albans Cooperative Creamery. Ben & Jerry’s buys his co-op’s cream and condensed solids. “That’s really the extent of our position,” he adds diplomatically, “regarding different farm-management tools.”