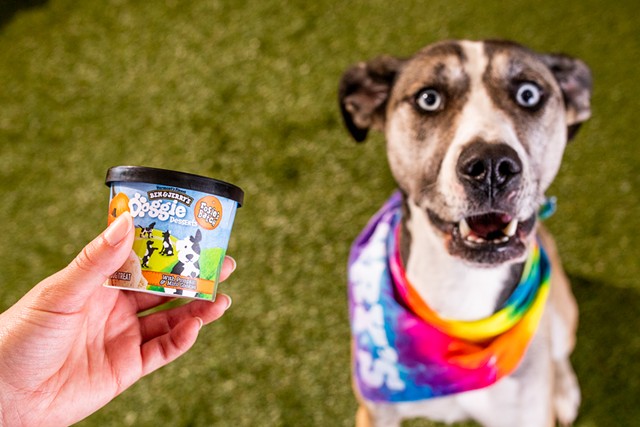 The company is  hoping that devoted fans will pick up a pint of Cherry Garcia for themselves along with a 4-ounce mini cup of "Pontch's Mix" peanut butter and pretzel swirl for their furry best friend.

Like the recently announced “Change the Whirled” flavor named in honor of activist and former NFL quarterback Colin Kaepernick, the canine-custom offerings are made with a sunflower seed butter base.

This base is more suitable for dogs, explained company spokesperson Laura Peterson, because some dogs do not digest dairy products well. “We worked with pet nutritionists to make sure the treats are safe for dogs to eat,” Peterson wrote in an email.

The new recipes were developed with the assistance of more than three dozen employee pets who frequent the dog-friendly company headquarters in South Burlington. Two even received the distinction of having flavors named after them.

“Pontch’s Mix” is named for a French bulldog  belonging to a longtime communications department employee. “Rosie’s Batch,” made with pumpkin and mini cookies, recognizes a mixed-breed rescue who hangs out with the consumer insights team.

While pet parents could also eat these new frozen desserts, Peterson cautioned that pet and human food regulations are very different, so the products are not marketed for human consumption.

The project started about a year ago and had a similar timeline and development process as the company’s standard flavors.

Lindsay Bumps, a member of Ben & Jerry's global marketing team, was involved in the project almost from the beginning, she said in a phone interview. Prior to working at Ben & Jerry's, Bumps was a certified veterinary nurse and brought her animal care expertise to the project.

Bumps, whose French bulldog, Spock, comes to work with her, said that dogs are "kind of instilled in our culture at Ben & Jerry's."

And unlike cats, which do not have a taste for sweets, she said, "Dogs do enjoy sweet treats."

The development team focused on base flavors that dogs already like including peanut butter and pumpkin before adding the signature chunks and swirls for which the company is known.

Ben & Jerry's resident dog pack was utilized as a focus group to taste-test the flavors. "Some dogs are pickier than others," Bumps said, "but the majority of dogs who tested them, liked them."

The market for dog treats is significant. A Packaged Facts market research report estimated the U.S. pet food and treats market at $39 billion in 2020. Another Packaged Facts report indicated  that 49 million U.S. households have pet dogs.

Packaged Facts noted that category sales have recently been “buoyed by the pet adoption surge in the wake of the COVID-19 pandemic.”