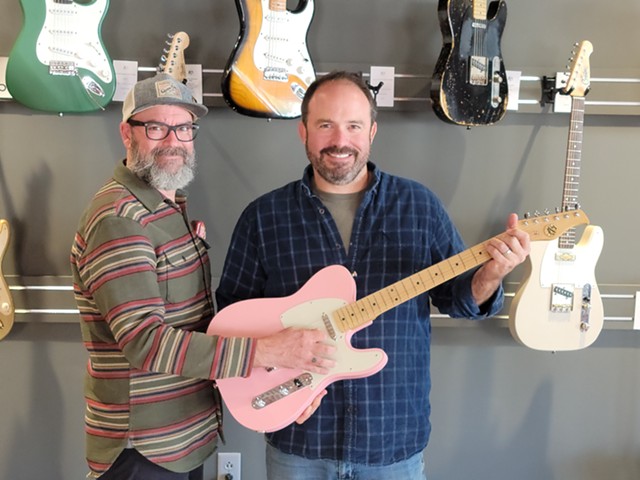 The shop is located adjacent to Buchwald's workshop facility, where he crafts his custom instruments. The luthier, who built a custom acoustic guitar for Phish's Trey Anastasio last year, started to think about having a showroom to display his products.

"Originally, I was just going to convert one of our offices into a showroom," Buchwald explained as he sat next to MacIntyre in his new storefront. "But we were growing so fast as a business that I really needed the office."

When his landlord alerted Buchwald that the space next to his business was opening up, he jumped at the chance. He and MacIntyre had become friends in recent years, and he knew the latter was thinking of opening a store to show off his growing collection of vintage guitars. 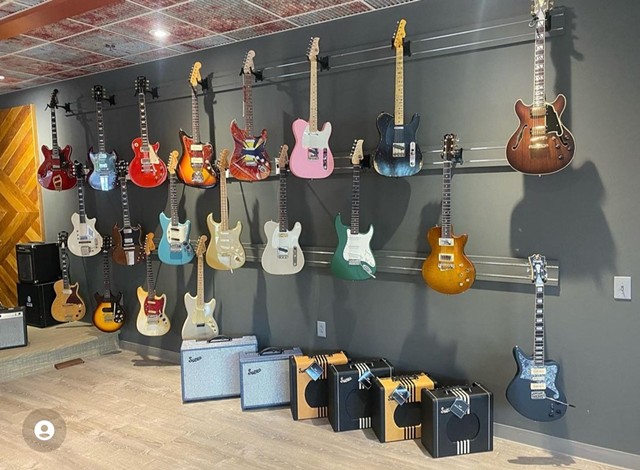 "I was thinking of doing a by-appointment sort of store out of my own house," MacIntyre said. "But then Adam approached me about this idea, and I had to go for it. This kind of shop hasn't existed in Burlington — or Vermont, really — in years."

Both Buchwald and MacIntyre fondly recall the days when vintage and boutique instruments weren't so hard to find in Vermont.

"When I went to UVM, there were shops like Calliope and Vermont Folk Instruments," Buchwald said. "Places where you could play handmade, quality gear, as opposed to a bunch of imports and mass-produced shit."

"Now, you essentially have two Guitar Centers here," MacIntyre opined. "There's nothing wrong with going to a place like that for a lot of things, but we want to offer something different."

Indeed, the inventory at Ben & Bucky's is made up of some hard-to-find and custom-made brands, such as D'Angelico, Supro and Harmony guitars, as well as boutique amplifier brands such as Milkman Sound, made by Burlington expat Tim Marcus.

The majority of the guitars hanging in the new storefront come from MacIntyre's collection or from his online hunting trips scouring sources such as Facebook Marketplace and Craigslist for vintage instruments. Online shopping has shown him how vital it is to have a brick-and-mortar storefront like Ben & Bucky's.

"Getting to go into a store and actually play these guitars is so important," MacIntyre said. "One ’65 Fender Stratocaster is not going to play the same as another ’65 Strat. You need the guitar in your hands before you know."

That logic works the same for Buchwald and the custom Iris and Circle Strings guitars he makes.

"I've never had a spot where I could bring a customer into a nice area and have them play the guitar I'd made for them," Buchwald said. "We really wanted that. The idea is to have all kinds of our guitars hanging up in the showroom with all the different makes and kinds of wood, all that stuff, so customers can see what they might like in their custom build."

On top of vintage inventory and custom instruments, the store offers unparalleled instrument repair resources. Buchwald owns one of only two Plek machines, a computer numerical control system used to maintain and repair guitar frets, in all of New England.

"When I moved back to Vermont in 2008, there was nowhere to see vintage gear and high-quality, custom stuff," Buchwald asserted. "Ben and I want to provide that and provide services to all the amazing musicians in the community."