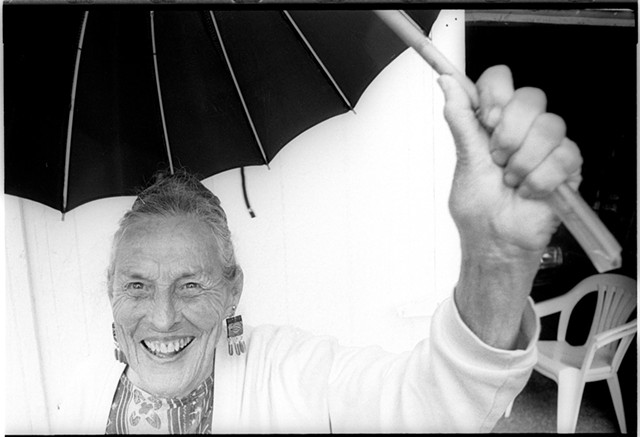 In the words of poet Naomi Shihab Nye, "Everything is famous if you notice it." Over nine well-lived decades, late Burlington resident and prolific historian Lilian Baker Carlisle earned local fame by noticing, and documenting, the relatively mundane. In 1951, Carlisle became Shelburne Museum founder Electra Havemeyer Webb's right-hand woman. She cofounded the Chittenden County Historical Society in 1965, contributed to three volumes of Burlington neighborhood histories, and created more than 50 scrapbooks before her death in 2006 at the age of 94.

Now, the society that Carlisle helped establish is honoring her memory in an especially apropos fashion. Some 10 years in the making, Lilian Baker Carlisle, Vermont Historian, Burlington Treasure: A Scrapbook Memoir is chock-full of artifacts saved by Carlisle during her life. Photographed by Tim Clemens, a selection of Carlisle's photos, documents and ephemera is accompanied by a biographical narrative written by Joanna Tebbs Young. Chapters are organized by decade, subdivided into themes such as community, politics and personal life.

"Lilian was ahead of her time in knowing that ordinary lives were what ordinary people wanted to learn about," longtime CCHS member Sarah Dopp told Seven Days. Dopp has worked with the society since the 1970s, and remembers Carlisle as far back as the mid-'50s. She grew up in South Burlington's Mayfair Park community, where Carlisle then lived with her family.

Shortly after Carlisle's passing, Dopp, along with Sally Conrad and Ann Arms, set to work poring over her handmade archives. "It was both overwhelming and exhilarating," Dopp recalled, "because it gave you a sense of the multifaceted nature of her life."

In 2015, CCHS hired Young to join their efforts as the book's writer and designer. The Rutland-based freelancer was introduced to Carlisle by way of a box of memorabilia. From this, she constructed an initial outline of the book. Then, for several months, she traveled to Burlington weekly to flesh it out using primary sources — Carlisle's scrapbooks.

"This woman was incredible," Young said by phone, "I don't think she ever sat still."

A mother in her forties, Young explained that she was inspired to learn all that Carlisle managed to accomplish later in her life. "She didn't really start doing the biggest things until her kids were out of the home," Young said. "She didn't publish her first book until she was 60 — it was a really good reminder that I have time."

Carlisle's achievements include creating the cataloguing system that's still in use at the Shelburne Museum. Often called into service as an antiques appraiser, she was also a tenacious researcher and writer. In addition to creating educational materials and exhibition text as the museum's director of research and collections, Carlisle contributed to myriad material-culture publications, including Antiques Journal, Art & Antiques Magazine and Spinning Wheel. In 1970, she published the resource volume Vermont Clock & Watchmakers, Silversmiths and Jewelers, 1778-1878. And, unrelatedly, she wrote professional reports on Vermont's health care infrastructure, according to a chapter in the memoir.

In 1981, in her late sixties, Carlisle became the oldest student ever to graduate from the University of Vermont. Armed with a bachelor's degree in history, she soon returned for her master's. Her graduate thesis, however, was met with considerable resistance. The topic? "Evolution of the American Kitchen to 1950."

In Scrapbook Memoir, Penny Carlisle recalls of her mother, "She was a feminist, but not 'bra-burning,' not in public, anyway." Fighting the good fight to write a master's thesis on domestic aesthetics, however, has its own spark of radicalism. Ultimately, Carlisle prevailed and earned her master's in 1986. (UVM gave her an honorary PhD in 2005.)

In 2001, Burlington-based sculptor Barbara Zucker paid creative homage to one of Carlisle's less formal archives: her face. The artist, who in 1972 cofounded the first women's gallery in the U.S., A.I.R. Gallery in Brooklyn, memorialized the then-octogenarian with wall-hung steel sculptures modeled on her wrinkles. The works were shown in the Amy E. Tarrant Gallery at the Flynn Center for the Performing Arts. The solo exhibition was titled "Universal Lines: Homage to Lilian Baker Carlisle and Other Women of Distinction."

According to Dopp, Scrapbook Memoir likely would not exist without the resource and fundraising structure that Carlisle herself put in place decades earlier. Carlisle was instrumental in establishing a CCHS publications fund, Dopp explained. The account was opened in the early 1970s, in conjunction with the release of the society's first-ever publication, Look Around Chittenden County. Portions of the sales were returned to the account to fund the next publication, and so forth. Carlisle also instigated a sponsorship program for some CCHS publication efforts, which was used to help hire Young and print the volume.

Like Carlisle, Scrapbook Memoir is bursting with information, darting between the micro and macro at every turn. The result is a portrait of a vibrant, savvy woman who knew a thing or two about creating a legacy.