'Bells & Whistles' at the Museum of Everyday Life

In public, bells and whistles can proclaim a marriage or death or simply relay the time of day. In your pocket, they can announce the cold, digitized end of a relationship — or, more often, some forgettable interruption. Visitors to the exhibit "Bells & Whistles," at the Museum of Everyday Life in Glover, are invited to dig deeper into the chirps and dings that have become the defining sounds of our daily lives.

In contrast to last year's exhibit, "Mirror/Mirror," which was heavy on visual stimulation, "Bells & Whistles" is primarily an auditory experience. One installation features a recording of Silbo Gomero, which the accompanying description notes as "a distinct, whistled language" from La Gomera, one of the Spanish Canary Islands. Two islanders communicate in the fascinating language, making sounds that can travel up to five kilometers across the mountainous cliffs.

Other ways in which humans whistle are far less enchanting. A wolf whistle, the exhibit reveals, is not only a term for harassment of women on the streets but an actual product available for creeps to purchase. Wolf Whistle is a small blue plastic whistle with packaging that shows a wolfman in a yellow jacket whistling at a wide-eyed, buxom woman. "Tell Her You Care!" it reads. MoEL chief operating philosopher Clare Dolan said she recently purchased this new, and she doesn't think it's sold as a farce.

Just below the wolf whistle is a package of Protect-Yourself Whistles from the 1970s, which women were instructed to blow when they felt in danger. The juxtaposition invites considerations of who has the power to disrupt the silence with a shrill call for attention that, in one way or another, affects women's bodies and safety.

Just past the wolf is the sheep, in the form of a re-creation of a costume worn by the Halubian bell ringers of Croatia. Dolan said that she worked on this with Marcella Houghton and Kylie Gellatly. Clad in lamb's wool and horns, with bells attached, these men parade through the streets shaking their bells to ward off the spirits of winter.

The garment smells strongly, though not unpleasantly, of the unwashed livestock from which it was made. Given that the museum occupies an old dairy barn, this feels appropriate.

By their nature, sounds are usually beyond the realm of individual ownership and consumption. A section called "Bells & Whistles at Home" explores how such sounds have moved from the communal realm, such as church bells, to the family home — perhaps a cuckoo clock — to our personal devices, whose beeping alerts their owners as well as bystanders. Perhaps fittingly, visitors' cellphones aren't likely to make much noise at the museum, as reception is spotty in the Northeast Kingdom.

Displayed here are the bells and whistles of the pre-digital era: a rotary phone, a whistling teakettle, bird-shaped pie whistles that release the steam from baking pastries. The bellows of a cuckoo clock come with instructions on how to gently squeeze them to make the iconic sound. Rows of manual alarm clocks, set to go off at random times, are installed on the wall.

One clock startled this reporter when it sounded and violently crashed to the floor, losing its battery in the process. (It was unintentional; Dolan said later that she would secure the clocks.) 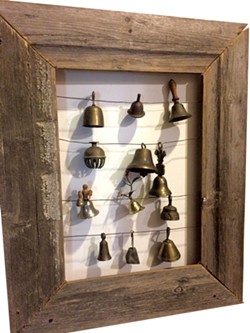 Though often shiny, the show's bells and whistles are generally more notable for their sounds, social contexts and histories than for their appearances. But one installation is both visually stunning and lovely to hear. The untitled piece, created by Dolan and a group of volunteers, consists of a piece of black netting, about 15 by 8 feet, to which are fastened 600 small brass bells. Displayed in front of a matte black wall, it evokes a night sky full of shimmering stars. The bottom of the curtain is attached to a thread spool, which is glued to a slowly running phonograph; the motion makes the bells jingle as if swaying in a light wind.

The undulating bells foment a sensation of delicate resonance in a tranquil environment — a sort of private bell show. The only thing stopping a visitor from shaking the curtain to augment the tinkling is inhibition — or contentment with the subtle sounds as they are.

Beside the bell curtain is a section called "Spirituality," which features bells from Tibet, Nepal and Thailand and a recording of church bells in Europe and Russia, played every 15 minutes. Here, museumgoers are invited to sit on pillows on the floor. They may find themselves reflecting on the layers of sound the corner holds — the humming and rumbling from other visitors and the continued ringing of the bells, indifferent to ambient vibrations.

That relaxing break might help visitors take in the final section of the exhibition, which showcases various ways in which whistles and bells have been used to enforce authority. The description of "Authority," which contains police and military whistles, notes that police "have the sometimes conflicting assignments to serve and protect both the state apparatus and its people." Photos show large metal bells being confiscated by the U.S. military in the Philippines and by the Nazis in the Netherlands. In addition to seizing the sounds of an occupied culture, the Nazis melted down the bells' metals to transform them into weaponry and armor. A reproduced poem from Kentucky, titled "Melt the Bells," urges Confederates to do the same with their own bells.

David Fairbanks Ford, proprietor of the Main Street Museum in White River Junction, collaborated with MoEL for a display on the Liberty Bell. Below Liberty Bell tchotchkes is an arrangement of objects that warrants close examination: bark, rocks and a feather from what is probably the final resting place of Ona Judge. She was enslaved in Philadelphia by George and Martha Washington on the property that is now home to the Liberty Bell Center.

Judge ran away to freedom in New Hampshire and was never returned to bondage, much to the ire of our first president, who is often lauded for doing something related to freedom in this country.

Like previous MoEL exhibits, this one places the rousing, the mundane, the disturbing and the whimsical in close quarters. Visitors may leave inspired and unsettled, with a messier and broader understanding of everyday objects and their cultural context.

As a whole, "Bells & Whistles" shows that the ones with the tools to make noise are the ones with the power. The exhibit's introductory text refers to "the whistleblower, protestor against injustice, who draws his name from the very same tool of authority." Although no specific displays address the concept of whistleblowers, "Bells & Whistles" can lead to a contemplation of the role of the master's tools. Perhaps they cannot, as Audre Lorde noted, be used to dismantle the master's house, but occasionally they can pierce the silence and ring in something true.

The original print version of this article was headlined "Soundand Fury"