Being There: Walking Conversations at Cold Hollow Sculpture Park 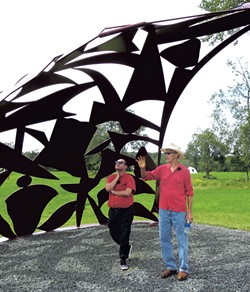 Seen against the wide summer sky and forested hills, the works — some measuring 30 feet in one direction — integrate into the landscape that inspired them. Visitors can stroll between them on grassy paths mown by a neighboring farmer, with no sound louder than the wind and birds to interrupt contemplation.

However, on a recent sunny Saturday, some 30 visitors gathered around a group of gracefully twisting steel sheets, titled "Swingin' Easy" (2012), in anticipation of something more. It's here that Stromeyer and Shelburne Museum design curator Kory Rogers began "Craft and Art: Meetings and Divergences," a discussion on the nature of craftsmanship in fine art.

The talk marked the second in a new series of five Walking Conversations, where artists and creative experts from fields such as poetry, music and science meet to discuss conceptual dimensions of Stromeyer's work.

Rogers and Stromeyer started with an overview of the craft movement in the U.S. following World War II. The 90-minute talk brought visitors to two more sculptures that are among the most labor-intensive of Stromeyer's 40-year career. "Darwin's Reply (for Arthur)" (2007) required three months of cutting, assembling and welding to create its arching screen of individual shapes. "Ngozi" (2010-13), the artist's sole sculpture in cast concrete, posed such significant engineering challenges that he never attempted another in that medium. Even with its foam core, the piece weighs 27,000 pounds.

The talk raised a central, if not new, question: When is something a work of craftsmanship, and when it is a work of art? Stromeyer pondered this years ago while working on a job photographing the collection at the Boston Museum of Fine Arts. "I wondered why one object ended up in an art museum and another in a craft museum, or an ethnographic museum," he recalled.

Stromeyer and his wife, Sarah, purchased the Enosburg property in 1970, and he's been sculpting there ever since. (The couple live in the farmhouse half the year; the other half they spend in Austin, Texas, in a house, which Stromeyer codesigned with an architect, that is void of any right angles.) The artist does all fabrication work in his purpose-built Vermont studio. Though closed to visitors, the cavernous building is outfitted with enormous sheets of steel and machinery designed to bend, cut and lift them, some of which the artist built himself.

What the studio doesn't contain is a computer — Stromeyer works entirely from models he fashions from wood, foam and other materials — or a gaggle of assistants one might expect given the scale of his work. He typically employs one full-time helper.

Stromeyer sees his own work as art rather than craft. "What drives my work is the vision, not the fact that I'm a steel sculptor," he said. Rogers, less keen on drawing distinctions, told the group that Stromeyer is a true artist precisely because he's "a true craftsman."

When Rogers first encountered Stromeyer's work in a 2013 show in Burlington's City Hall Park, he was intrigued but not bowled over. At Shelburne Museum, Rogers curates handmade objects of Americana; by contrast, Stromeyer's work is "very modern," in the unsmiling assessment of one Russian visitor. "Patchy Fog" (1979), for example, is an assemblage of bent I-beams, sheets and other steel elements. It didn't interest Rogers, he said, until he learned that Stromeyer created the individual shapes by shattering larger pieces of material with a three-ton boulder, dropped from 40 feet up.

In Stromeyer's early work, surfaces are rusty and reveal the natural aging process of steel. In the 1980s, he began applying colorful, painted finishes to his works; "Swinging Easy," for example, has metallic green, copper and blue surfaces. As years pass, Stromeyer reapplies the paint to keep it looking vibrant.

Offering discovery more than danger, Stromeyer's works are far from pure minimalism. One recent series evokes human postures; older works gesture toward figurative subjects such as orange peels and caves. His titles typically evoke an image or reference, such as a dance ("Paso Doble") or songs ("Swingin' Easy" is a jazz standard made famous by Sarah Vaughn); they come to him only after the works are complete.

Stromeyer's various inspirations — music, the landscape of northern Vermont or a South American cave — helped give rise to Walking Conversations. Along with his wife, Stromeyer wanted to offer the public an interdisciplinary view of the works. After all, Sarah notes, "a sculpture park asks you to look at things from all different angles."

The talks are indeed wide-ranging: In one, Stromeyer, an amateur violinist, will discuss musical elements in sculpture with Middlebury-based conductor-composer Andrew Massey. In another, Craftsbury poet Julia Shipley will examine nature and sense of place with the sculptor. Lastly, University of Vermont medicine professor Jason Bates will talk about scientific practice and its role in the creation of art.

While Serra, Jeff Koons and other renowned metal sculptors employ teams of specialists to draft and fabricate their works, Stromeyer isn't interested in having others build his art. But he is intent on expanding the park's accessibility and increasing foot traffic. When the couple opened their property to the public last year, many visitors had trouble locating the remote, rural spot, which lies 10 miles from the Canadian border.

Now an entry sign in the shape of a massive rusted hex nut — a Claes Oldenburg-like play on proportion — stands at the driveway bearing the letters "CHSP." Signs on the entry gate indicate dates and hours of operation. This reporter's Google Maps voice app got her there without incident, even though the area lacks the reception required to make a cellphone call.

While CHSP isn't as centrally located as Storm King outside New York City, it's worth the trip. The park offers viewers a comprehensive look at how one sculptor's vision evolved over decades.

Rogers sees Cold Hollow Sculpture Park becoming an art-tourism destination. "I do think this will have a long-lasting effect as they start to get the word out," he said in a phone call. "It is a unique destination and, if it does take off, it will be very popular."