Being the Big Guy 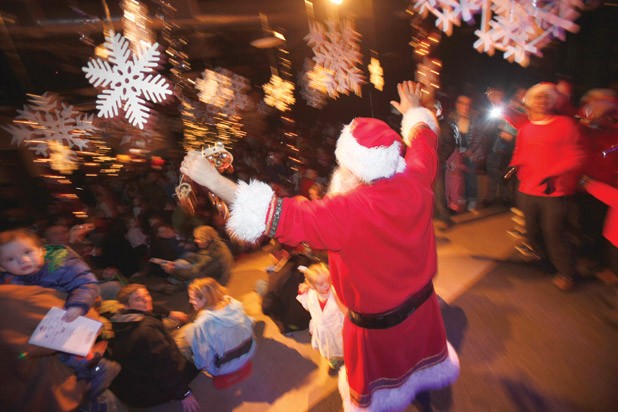 Michael Monte is used to being in charge — the gregarious 57-year-old is the chief operating officer of the Champlain Housing Trust, an affordable-housing nonprofit. Before that, he was director of Burlington’s Community and Economic Development Office.

But nothing in his work life compares to the one day a year he gets to play Santa Claus for the Polar Express, an annual fundraiser for the Vermont Children’s Trust Foundation that took place last week. It’s based on the children’s book The Polar Express, in which a young boy doubts the existence of Santa, then embarks on a magical Christmas Eve train ride to the North Pole. Permitted to request a gift, he asks Santa for a simple silver bell from a reindeer’s harness.

In VCTF’s version, whole families wearing pajamas board a Vermont Railway train near the King Street ferry dock. They ride to South Burlington, have cookies and hot chocolate, then head back to Union Station, where about 70 exuberant “elves” — many of them local middle and high school students — wave and welcome them to the “North Pole.” A pajama-clad man reads Chris Van Allsburg’s book; at the end, Santa himself appears, and the crowd goes wild. He leads them upstairs, where each child gets a silver bell to take home.

Hart picked Monte to be a Santa three years ago “because he’s awesome,” she says. “He loves kids … and he’s supremely chatty and social.” Seven Days talked to Monte as he prepared for his Sunday shift.

MICHAEL MONTE: Physically, it’s a tough little job. I mean, it’s not, like, overwhelming, but from about 11:30 or 12 until about eight o’clock, you get about 20 minutes of rest an hour, but then you’re basically ringing bells, standing up there, hugging kids, picking kids up. There’s a lot of that kind of stuff.

And by about 7:30, you’re going [sighs heavily]. You start to breathe a little deeper to make sure you can generate the last little bit of it.

But the great thing is that the kids are just so … I mean, I told Fagan that if she was really smart, she would auction off the Santa job, find a sponsor. I mean, they get to play Santa. How incredible is that?

MM: In this context, the kids get a great story; they live this beautiful little fantasy, which is sweet, and about believing, and that’s inspiring in some way. It’s not about a commercial exchange. It’s not Xboxes. It’s a little bell, and it’s a hug.

Every kid that goes by here, almost every kid wants a hug. And every mom or dad wants a handshake or a little squeeze. And I’m a hugger, so this is great for me.

SD: It’s so sweet that kids really want a hug, but are there kids who ask you for other things?

MM: Every once in a while, there’s a “Hi, how are you, Santa, did you get my list? Are you going to be able to get me that ba-ba-ba?” And I usually don’t know what to say at the moment. It’s usually a little hug, and “Sweetie, talk to your mom. We’ll see what we can do” [laughs].

SD: Do kids ever try to pull off your beard?

MM: I have to watch out. I can tell if somebody’s rambunctious and I have to sort of protect my gear, meaning my beard, my hat, my stuff. So, I have to make sure I’m holding it like this [pantomimes hugging a beard to his chest].

And Mrs. Claus is there. Mrs. Claus is essential to Santa’s success. I don’t actually hand kids the bell. You were here yesterday. Did the Santa hand you a bell?

SD: Yeah. I brought my son, who’s 4 and very shy. He didn’t look at Santa, but, Santa handed him a bell and said, “Merry Christmas, Graham,” because he had a name tag. I thought he had a terrible time because he was so shy. But he said, “I can’t believe we saw the real Santa! And he knew my name!”

SD: How do you prepare for that and get in character?

MM: It’s not that hard. I do have to think about projecting my voice, because I sort of talk fast and mumble. But once I put the boots on and the hat on and stuff, everything disappears. I feel more Santa-like.

Then I run up the stairs, and each kid comes. I usually try to get on the ground a little bit, so that Santa’s not so tall. And if the kid is too shy, I get on one knee and put my arms out…

I usually play off what the parents are thinking they need and want anyway, because it’s really about them also getting a good moment for themselves. It’s about the photos a little bit. They’re going to remember this more than the kids are [laughs], right?

SD: So, what do you want for Christmas?

MM: I’ve been wanting a motor scooter, but it’s much too expensive [laughs].

SD: Maybe Santa will bring it to you.