A Burlington icon examines old wounds in a new play

Every city has characters that distinguish it from any other place. They're not always wealthy or influential; they're just people everybody knows, if not by name, then by sight. Even if you don't like them, you take a certain pride in recognizing these people, because that knowledge identifies you as a local.

In Burlington, Josh Bridgman qualifies as such a fixture. The 35-year-old playwright — whose impressive new play Silent Invasion began its two-week run at 135 Pearl last Thursday — is one of the city's more identifiable residents.

Bridgman's short, thick, black hair is flecked with gray, and is often unruly enough to qualify him as disheveled. His large, dark-rimmed round glasses are sometimes smudged or askew. Rain or shine, summer or winter, he's cloaked in a worn, black trench coat. "I like film noir stuff," he explains. "The heroes or anti-heroes in that always wear trench coats."

Though he's worked for the past decade as a parking garage attendant — currently for the city of Burlington — he doesn't own a car. He walks everywhere, and spends a lot of time downtown.

If you run into him at his usual watering holes — Uncommon Grounds, the O.P., Radio Bean — you'll notice his distinctive cackle. Over beers one afternoon at Radio Bean, cable TV producer Bill Simmon bluntly but affectionately describes his friend's laugh as "fucking loud."

Bridgman, sitting across from him, flashes one of his crooked smiles. "Someone said to me once it was like an old villain laugh," he says in his gravelly voice. "It's not villainous, but it has that old 1930s serial kind of sound."

It's not just Bridgman's presence that's led to his notoriety; he's also caused a few local controversies. There was the time he disrupted the Burlington City Arts "Bessie" awards by storming the stage in a bunny suit. And it's hard to forget the naked public access show featuring his accidental on-air erection — "It maybe got a little half-mast, as it were," recalls Simmons, who hosted the all-nude episode of "Studio 8 Uncensored." "Some blood got engorged, but not in a full-on, in-your-face way."

Besides stirring up trouble, Bridgman has also collaborated with a long list of Burlington artists and musicians. He was in the original cast of Stephen Goldberg's Curb Divers of Redemption, and David Symons' adaptation of Wallace Shawn's play Marie and Bruce. He wrote a song, "Broken Hand," for Burlington band Construction Joe, and acted in and helped produce filmmaker Keith Spiegel's film Juvenile Defenders. He's a regular guest on the "Matty and Stech Variety Hour" on public access cable, and he's contributed work to Rael One-Cloud's 'zine, AlphaBitch Afterbirth.

"If I ever write anything for The New Yorker," Bridgman comments, "I want AlphaBitch Afterbirth in my bio."

Now Bridgman has moved from a supporting role to the spotlight. Green Candle Theater Company's production of Silent Invasion drew near sell-out crowds during all three performances on its opening weekend. The tight, beautifully acted multimedia event reveals that Bridgman is not just some local eccentric; he's a talented writer, too. 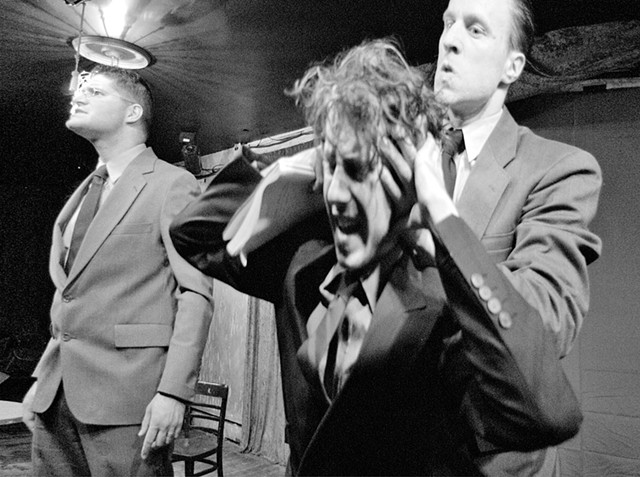 Silent Invasion's promotional materials don't come right out and say it, but Bridgman's play is semi-autobiographical. The pitch on the website says, "You are invited to enter the fractured psyche of a man struggling with a story from his past that demands to be realized." That man is Bridgman.

The play opens with a projection of the final scene from the 1956 movie Invasion of the Body Snatchers. The screen is surrounded by red velvet drapes, recalling the glamorous movie houses of the mid-20th century.

The Body Snatchers story is familiar — residents of a small town begin to believe their loved ones have been replaced by imposters, when in fact they've been taken over by aliens. Dr. Miles Bennel escapes to warn the authorities, but the police chief thinks he's crazy. When an ambulance driver confirms the aliens' existence, the chief grasps that Bennel has been telling the truth. The final shot shows the palpable relief on the doctor's sweaty face — finally, someone believes him. It's one of the only hopeful moments in the whole play.

When the clip ends, the three actors — Aaron Masi, Seth Gillim and Nathan Jarvis — are seated in front of the screen, as if they had watched the movie. They portray three voices within the same man, ostensibly Bridgman. They wear matching suits and ties.

Masi is a doctor who believes his wife has been taken over by aliens. Jarvis is a young boy who suspects something's wrong with his mother. Gillim is "the Trickster," a malicious presence that needles the other two, exacerbating their paranoia.

At first, the play revolves around the doctor's fear of the aliens. "People seemed different," Masi insists. "But it wasn't how they looked, because they looked the same. They more or less acted the way you expected, but you could tell something was wrong. Missing." Masi concludes that this is because "the world is being taken over by a silent invasion of the aliens. You think you are the only one who knows about it."

During the second half of the 75-minute play, the focus shifts from the doctor to the boy and his mother. Jarvis, as the boy, darts furtively around the stage, carrying a composition notebook. His eyes are wide, full of fear.

When Jarvis first speaks, he interrupts Masi's musings on the aliens to pose seemingly random questions: "Do you eat your Captain Crunch cereal with a burnt spoon?" and "Does breakfast cereal taste better with a burnt spoon?" It soon becomes clear that the spoons in his house are burnt because his mother is a heroin addict.

"I prefer to be cryptic," the playwright says, when asked if the piece is about him. Pressed, he admits that his own mother was a heroin addict.

Growing up exposed to that lifestyle had a huge impact on him. "I've always had a distrust of surfaces," he explains. "I'm not 'a paranoid,' but I like using paranoia artistically. I can peel away at it." He calls Silent Invasion "an exorcism."

Bridgman doesn't offer many details about his early life, but says Silent Invasion pretty much sums it up. His parents divorced when he was young. He and his mother, stepfather and sister relocated a lot and struggled financially.

As a teenager, Bridgman moved in with his grandparents in Charlotte, and attended Champlain Valley Union High School, graduating in 1987. He moved to Boston briefly after graduation and took some classes at a community college before returning to Burlington in 1989.

He's lived here ever since, working at movie theaters and parking garages — occupations that leave him time for reading and writing. On any given day, you might find him in his booth flipping through a paperback sci-fi novel or a dense tome on European history.

"If Kafka were around today," Bridgman quips, "he would be working in a parking garage."

Bridgman's occupation adds to his colorful bio, but Tom Cleary, who befriended Bridgman at CVU, says he had his own style even as a teenager, down to his trademark laugh. "He was an original thinker," Cleary remembers, "and creative in ways that weren't always very highly regarded in the educational system."

Cleary recalls, for example, a high school talent show at which Bridgman rolled a television set on the stage, and then talked to it and played a snare drum. "He had a very intense conversation with this TV," Cleary says. "It was really, really funny. It was totally bizarre, but he had everybody engaged because he was totally committed to what he was doing."

Cleary, who teaches jazz piano at UVM, says Bridgman taught him a lot about music, movies and Beat poetry. The two formed a performance art-inspired band called Citizen V., and gigged at venues such as 242 Main. "Josh had absolutely the best record and tape collection of anybody I went to school with," recalls Cleary.

One band Bridgman has always hated is Phish, says filmmaker Keith Spiegel. He recalls one night in late 1996 or 1997 when he and Bridgman lived together and were casting for the film Juvenile Defenders. Phish drummer Jon Fishman came over, and after everyone had had a number of drinks, Bridgman went into a rant about Phish and Phish fans. "Fishman, instead of getting upset, I think he thought it was kind of refreshing," says Speigel. "He started yelling back in a joking kind of way. By the end of the night, they were like buddies. I could see they both had a mutual respect."

One band Bridgman does admire is the Talking Heads. He says they helped him deal with the paranoia and alienation he felt growing up. That and watching old movies.

Director and Producer Tracey Girdich says Spiegel and Simmon, like most of the cast and crew, were drawn to the play because of their affection for Bridgman. "His personality is what really brought 'the A-Team' to it," explains Girdich. "They said, 'Oh, it's Josh's play? Yeah, I'm excited about it. I want to do that.'"

Girdich, too, has a personal connection to Bridgman. The two have long been friends, though she can't remember exactly how they met. "It was probably just a late-night conversation at the O.P.," she says.

Girdich likes Bridgman in part because he's "fearless," she says. "He has his own style, his own way of communicating. I just find Josh an incredibly inspiring person. There's no one I know like him. His heart just glows."

Bridgman credits Girdich for inspiring him to write the play. She says she thought writing about his childhood would be good for him. "I just thought it was time," she says. "I really felt it would be healing for him and other people to really face this."

Girdich spent five years helping Bridgman edit the play, and suggested he turn what was originally a one-man show into a piece for three voices. She also staged the play and added the music.

But Girdich didn't touch Bridgman's text. The mundane and profoundly horrifying details of the life of an addict's child, the paralyzing paranoia — that's all him.

It's material he wields well. The pairing of the invasion and the addiction narratives is chilling. Girdich says that, when she saw the script, she was immediately struck by Bridgman's vision. "I thought, 'This is brilliant,'" she says. "It taps into this really primal fear that we all share, that our loved ones can become unrecognizable to us."

Girdich is now building a traveling set, and plans to take Silent Invasion to the Fringe Festivals in New York, Toronto and Montreal.

Bridgman is excited by the prospect. He muses about quitting the parking garage, moving to New York and becoming famous. He doesn't seem to grasp that he's already something of a celebrity.

"It is true," Gillim insists. He says that when he went to drop off a play poster at Blue Star Cafe in Winooski, he told the woman behind the counter he was in the play. She asked who wrote it. "Josh Bridgman," he said. The woman didn't know who he was talking about until he described the playwright — glasses, trench coat, parking garage, laugh.