Behind the Lens Again, Burlington Photographer Focuses on Friends 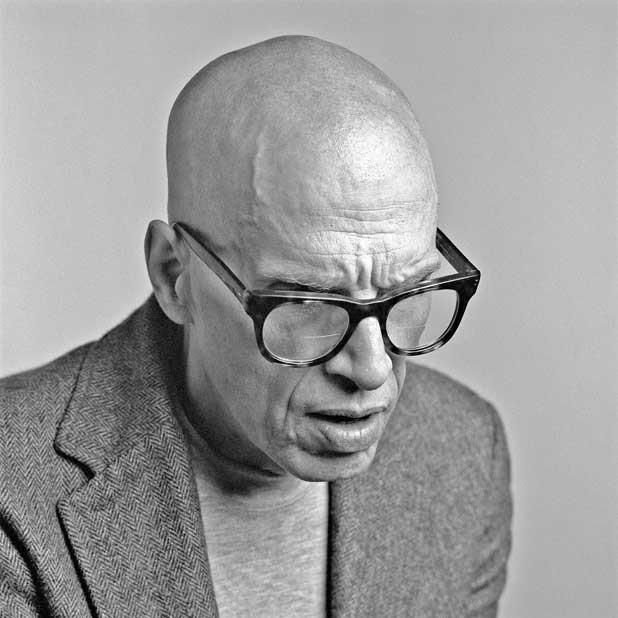 After a 30-year sabbatical from photography, Todd R. Lockwood picked up the camera he'd acquired as a teen and started "shooting and shooting" again.

A man who has managed several careers - including running a recording studio, a software company and an online merchandising business - Lockwood returned to his original calling in 2007, after his mother's death. He began with a series of portraits of his then-10-year-old son, Cooper. One image in particular stood out for him because, Lockwood says, "It was almost in the realm of sculpture."

Experimenting with film and digital processing, he achieved "a sort of hyper-reality" that conveys acute physical clarity as well as psychological insights. "I got really excited," Lockwood recalls during an interview at his South Burlington home, which doubles as his photography studio. He started asking friends to come over and sit for portraits.

Selected results of those sessions, along with a few samples of Lockwood's earlier work, will be displayed at the Shelburne Farms Coach Barn on August 27 and 28.

The artist says he establishes "an immediate level of trust" by choosing subjects he has known well over the years. (Hence the show's title: "One Degree of Separation.") In the studio, "barriers came down," and personalities were revealed.

Many of these sitters are contemporaries of the lean, white-haired 57-year-old. "They're at the top of their game right now," Lockwood surmises. Wizened features and expressive gazes "make them much better photographic subjects than they would've been 30 years ago."

In one of the most intimate shots, Burlington musician and Vermont Public Radio host Robert Resnik is captured in a rapturous grimace as, body bent, he fingers a button accordion. Dhyani Ywahoo, leader of the Lincoln-based Sunray Meditation Society, appears similarly transported in an eyes-uplifted, seemingly clairvoyant trance.

Lockwood achieves an exceptional degree of precision by digitally scanning his black-and-white film negatives to a high resolution. He then spends three or more days manipulating the image on his computer. Some of the portraits in the show - which measure either 20 by 20 or 48 by 48 inches - are so close-up that individual eyebrow hairs can be clearly seen, as can veins crisscrossing the whites of a subject's eyes.

Locally famous artists account for several of the 17 recent portraits included in the Shelburne show. Many viewers will recognize performer Rusty DeWees, as well as painter dug nap, pianist Elaine Greenfield, graphic designer Michael Jager and actor-filmmaker Allan Nicholls. But their expressions often grant viewers a deeper look at the person behind the celebrity. DeWees, for example, wears a pensive mien quite unlike his comical "Logger" persona.

While Lockwood is clearly pleased to acquaint Vermonters with his considerable skills as a photographer, "the best audience for this work will be one that does not recognize any of the people in it," he declares in the show's catalogue. "Anonymity allows the portraits to be viewed in a more fundamental way. We see parts of ourselves in them. They make us take stock of our lives."

A couple of the photos do attain an amazing painterly quality. The wash of light and shadow across richly textured skin makes the faces of film director Jay Craven and attorney Margaret Strouse appear to have been brush-stroked onto the cotton paper. Both images will startle viewers who assume a photograph can readily be distinguished from a painting.

Lockwood cites photorealist painter Chuck Close as a kind of inverse inspiration: "Close tries to push painting into a photography direction, and I'm trying to push photography into a painting direction."

Richard Avedon, perhaps America's foremost photo-portraitist, has also powerfully influenced Lockwood's work. He says he never shared Avedon's fascination with fashion, but in shooting his subjects against a blank background that focuses all attention on the sitter, Lockwood adopts a technique closely associated with the master lensman, who died in 2004.

When he began taking pictures at age 16, Lockwood had never heard of Avedon, nor did he know much about photographic technique. He came to the medium almost instinctively - although his mother had chronicled the childhoods of Lockwood and his four siblings in snapshots that, he says, were "quite good for someone with no training."

Remembering his adolescent self as "a real basement case," Lockwood says he was the kind of kid who stood on the sidelines photographing the jocks and, after school, retreated to a downstairs workshop in his family's New Jersey home to build robots. After taking the yearbook photos at his boarding school in Lake Placid, N.Y., Lockwood attended the Rochester Institute of Technology, which at that time offered the only four-year photography program in the United States.

He stayed focused on his camera until 1977. And then he walked away from photography, having decided it was "too small a window to be speaking through."

Lockwood moved to Burlington, where he took up the piano and began writing music. He established White Crow Recording Studio as well as the Brautigan Library (now defunct), a repository for unpublished writing based on a concept in a Richard Brautigan novel.

Over those intervening decades, however, photography stayed with Lockwood in a subtle but insistent way; he hung large-scale shots from his earlier incarnation in his recording studio on Marble Ave.

While assembling a slide show for his mother's memorial service, Lockwood found himself itchingly intrigued by the potential of photography once again. "Three months later," he says, "I figured, 'What the heck,' and pulled out my Hasselblad." It was the camera he'd purchased in 1967 with the proceeds from portrait commissions for high school friends' families.

Now there will be no turning away. "I want to see how far I can take this," Lockwood says, gesturing toward the portrait collection he's assembling in another basement, many years removed from New Jersey.