Behind the Big Top 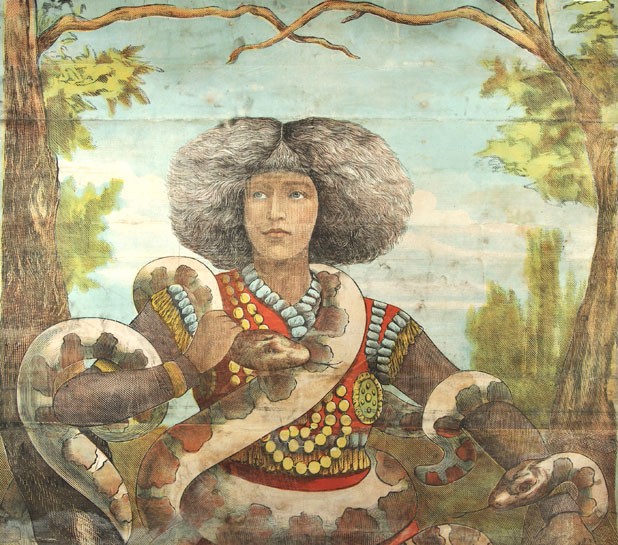 Frequent visitors to the Shelburne Museum have seen the vintage carousel and, quite likely, many of the circus-related objects in the museum’s sizable permanent collection. But this year’s display, prepared by associate curator Kory Rogers and including some artifacts from borrowed sources, is worth another visit. Quite simply, the exhibition, titled “Circus Day in America: 1870-1950,” deserves a superlative often applied to the big top itself: stupendous.

To begin with, the horseshoe-shaped Circus Building presents a grand new entrance with 13 colorful, large-scale sideshow banners by contemporary Vermont artist Toni-Lee Sangastiano. Like the exhibit inside, these images don’t shy away from the “freaky” aspect of the old-time circus. Far from it. Sangastiano depicts a fakir, his body stuck through with swords; a scaly-skinned Gator Girl; two-headed beasts; the de rigueur bearded lady; the world-famous “Siamese” twins Chang and Eng; a mythical creature called the Hippocampus; and more. Given today’s epidemic of eating disorders, the emaciated woman called a “Hunger Artist” might be most disturbing of all.

This greeting sets the tone for the sensationalist sensibility of the classic American circus; the Ringling Brothers et al. knew how much the public liked to be creeped out, a little scared, and overloaded with sensory information. Come to think of it, that hasn’t changed.

What has changed is the modern public’s reduced appetite for the exploitation of humans, as well as of animals that should be left in the jungle. And, with so many modern entertainment options, the circus just doesn’t enjoy the hegemony it once did — though one has to believe that, even now, a parade through town that included two-headed yaks and a woman wrapped in a python would generate some curiosity.

In any case, the Shelburne’s exhibit makes it easy to step back in time and not only understand the erstwhile excitement but feel, hear and even smell it. While the figures, photos and posters convey the pageantry and thrills, accompanying text on the wall helps build suspense by guiding the viewer through a typical day when the circus came to town: Muscling your way through the throngs of men, women and children lining Main Street’s sidewalks, you take your place on the curb…

For those who’ve not seen it before, the first exhibit, behind glass in the building’s anteroom, lays out an entire three-ring Kirk Brothers circus in miniature. Originally intended as a toy for maker Edgar Decker Kirk’s children, it includes some 3500 carved wooden figures no more than 6 inches tall, from tiny horse-drawn carts to aerialists to camels and zebras and bears (oh, my!) to hundreds of circus-goers in the grandstands.

And there’s more. A vitrine running nearly the full length of the horseshoe hall presents hundreds of small figures: Roy Arnold’s mini circus parade — which museum founder Electra Havemeyer Webb acquired in 1959 — carved on a scale of 1 inch to 1 foot. Vermont native Arnold (1892-1976) spent a quarter-century of his life creating these charming pieces, which have meticulous detail and moveable parts. Together they represent the kind of cavalcade of wagons, performers and animals that once passed through towns to entice audiences. This preamble to the big-top show was a show in itself, beginning with a pinto-riding cowgirl holding Old Glory and ending with more than 30 elephants and a rear guard. In between come all manner of exotic creatures and dazzling humans.

Vintage posters and photographs line the opposite wall — including several, dating from 1883, that were discovered behind the siding of the Harold and Gladys Degree home in Colchester in 1991 and painstakingly restored by museum conservators. A viewer interested in graphic arts will enjoy observing the progression from black-and-white broadsides to lithographs to serigraphs, not to mention the evolution of color printing and a variety of exclamatory fonts. Too, there is much for wordsmiths to admire in circus advertising, in which alliteration (“a fearless, fearful, fascinating feat”) is only surpassed by hyperbole — “the greatest show on Earth” is just the beginning.

The posters along the hall suggest that golden-age circuses evolved from a 19th-century “curiosities” variety show to more thematic spectacles, e.g., “Solomon and the Queen of Sheba” or “Columbus and the Discovery of America.” Even so, a more-is-better aesthetic prevails throughout the 80 years this exhibit represents, which corresponds with a golden age in American industrial development. For example, in 1872, P.T. Barnum’s business partner W.C. Coup changed the way circuses traveled around the country by tailoring railroad cars to make it easier for show wagons to load and unload. His innovation resulted in expanded offerings that could fill up to 100 cars.

At the Shelburne, Rogers employs more contemporary technology to embellish the sensory experience of the circus. In the section labeled “Midway,” he offers visitors whiffs of half a dozen realistic smells — including popcorn, cotton candy and sawdust — selected from the Demeter Fragrance Library. And near a colorful display of souvenirs, he’s installed a recording of a circus barker relentlessly imploring visitors to part with their money: Don’t just buy one — buy two, buy three, buy five…

While the wild beasts and daredevil acts of the classic circus were no doubt thrilling, what may stay with visitors long after leaving the Shelburne exhibit are the images of so-called “Peerless Prodigies of Physical Phenomena,” or sideshow freaks. The variously abnormal humans who offered themselves up to the stares of circus-goers, beginning in 1871, became celebrities and also posed for portraits. Those represented here include the 25-inch-tall Tom Thumb; Laloo, a man born with his twin brother protruding from his chest; the above-mentioned conjoined twins Chang and Eng; diminutive Cassie and Victoria Foster, the Fairy Sisters; and the Wonderful Albino Family — a mid-19th-century trio whose voluminous manes are just, well, freaking weird.

The international renown of “General” Tom Thumb, courtesy of P.T. Barnum, is but one example of how such unusual individuals could actually make a living with the circus — an opportunity now long gone (except, perhaps, on reality shows). Then again, modern medicine seems to have ensured that many such “peerless” persons — like the circus of yesteryear — no longer exist.