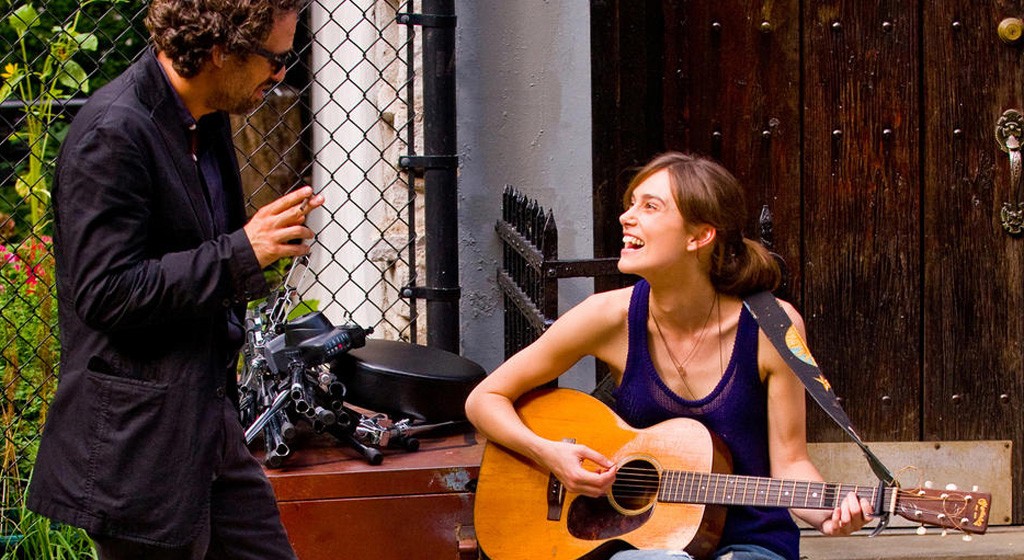 For Irish writer-director John Carney, Once was the charm. The 2006 musical drama had the lowest concept possible: Two struggling singer-songwriters meet in Dublin and fall in love. Yet the film's rawness, combined with the intensity and convincing chemistry of stars Glen Hansard and Markéta Irglová, earned it Grammy and Oscar nods and a passionate audience.

Now Carney returns with Begin Again, another romantically tinged musical drama that takes place in a bigger city than Once (New York) and features bigger stars playing bigger personalities with bigger (or at least more obvious) problems. The soundtrack, by New Radicals frontman Gregg Alexander and others, is also "bigger" in the sense of more radio friendly. The result is another charming film, and certainly a more down-to-earth, believable one than most Hollywood flicks set in the music industry. But the down-scale magic that made Once special is gone.

The story begins with a fateful meeting. At a dive bar's open mic, Dan (Mark Ruffalo) watches as Gretta (Keira Knightley) reluctantly croons one of her own compositions. He hears the next Norah Jones in her faltering performance, but he's the only one.

Dan's opinion matters, though, because, as we soon learn in flashbacks, he's a producer and founder of a well-respected label. Now divorced, alcoholic and barely tolerated by his successful business partner (Mos Def), he sees the unknown English songstress' talent as a last chance to turn his career around.

It sounds like a show-biz melodrama premise from Hollywood's glory days. But when we catch up with Gretta, we learn that she's no dewy-faced star waiting to be born. Rather, she's already had an acid taste of fame via her musician ex (Adam Levine), who dumped her after he got his big break. Heartbroken, she declares herself done with the whole mess.

Of course Dan convinces her otherwise. Fired by his enthusiasm, the pair is soon recording an album-length demo — not in the studio, but outside on the streets of "this beautiful goddamn fractured mess of a city," as Dan puts it.

Guerrilla recording is a good central device for a music film, but Carney tends to break up the performances into high-energy montages, rather than letting them play out in real time. Moreover, while Knightley sounds good backed by a lush string section, she also sounds processed, as does the "ambient" noise.

Begin Again's charm comes less from these not-terribly-fresh musical performances than from the dramatic ones. Ruffalo makes the wallowing loser Dan likable by dint of sheer energy, and Knightley doesn't simper or skimp on her character's dark moodiness. Hailee Steinfeld of True Grit shines as Dan's sullen teen daughter, though the script saddles her with a hackneyed character arc. And Levine delivers a nuanced, occasionally even sympathetic performance as a freshly minted pop star taking advantage of the perks.

Begin Again is reminiscent of the kind of "adult" romantic comedies Hollywood seldom makes anymore; more than a reprise of Once, the film is Broadcast News in the music industry. It's set in a plausible world of driven professionals, it combines insider savvy with sentimental reveries on how things should be (Dan and Gretta discuss the primal power of pop while sharing their music libraries), and it keeps you guessing about how the story will end.

Carney has crafted a glossier production that lacks the rough edges and sneakily hypnotic effect of his breakthrough, but Begin Again captures the dreamy mood of summer without insulting the audience's intelligence. It's fluff with a bracing touch of fiber.