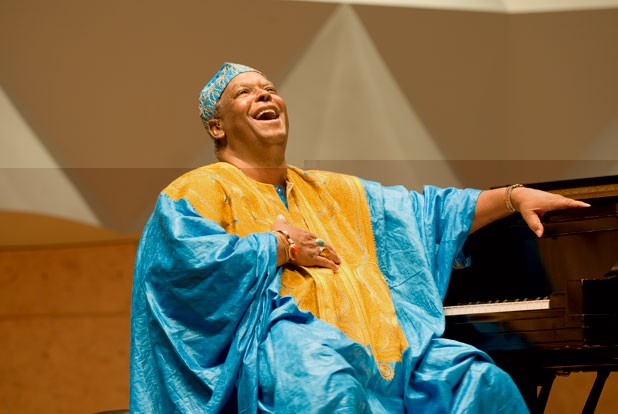 In the 1970s, when François Clemmons was playing Sportin’ Life in the Cleveland Symphony production of Porgy and Bess — the role that earned him a Grammy in 1973 — he asked musical director Lorin Maazel if he could ditch his tuxedo and wear a shimmering, multicolored silk smoking jacket instead.

Clemmons, now wrapping up his tenure as a Middlebury College artist in residence, recalls that he had the jacket made from four yards of silk he bought in Italy. “It cost a little fortune,” he says. “But the guy [selling it] told me, ‘You’ll never see this fabric on anyone else.’”

Maazel was hesitant; tuxedos and tails were tradition. But Clemmons persisted. “I have it in the dressing room,” he told Maazel. “You’d love it if you saw it.”

Right before the show that night, Clemmons says, there was a knock on his door: It was Maazel. “I took my tux jacket off and put on the smoking jacket, and he looked and he said, ‘Turn around.’ And I did. And he said, ‘Don’t ever wear a tuxedo again. Let’s go.’”

After the show that night, Maazel said, “Something happens to you when you’re dressed like that,” Clemmons recalls. “When you have the tails and tux, you’re just another guy. But when you do this, it’s a whole different experience.”

It would be difficult for anyone who’s seen Clemmons sing in Vermont to imagine the tenor as “just another guy.” He’s known around Middlebury — where he’s taught, directed choirs and performed for the last 16 years — as much for his radiant, flowing outfits as for his soaring voice.

Clemmons, 68, is retiring at the end of the academic year, but first he’ll perform an evening of spirituals one more time, this Friday, at Middlebury College. “The concert is like a personal analysis, a personal journey, a personal survey,” he says. “The word that keeps coming up is ‘personal.’”

Clemmons stops short of calling it a farewell concert. After all, he’s not going anywhere. He’ll continue to live in Middlebury, and he’ll keep singing when it feels right, whether at the Unitarian Universalist Society, at U.S. naturalization ceremonies or at Middlebury College basketball games. “I’m gonna go to the game anyway,” says the devoted sports fan. “If you’re gonna be there, you might as well get up and be useful.”

Last week, Clemmons directed his last concert with his Martin Luther King Spiritual Choir, a group of about 50 students and community members, many of whom had never read music or sung in a choir before. Clemmons encourages the singers to improvise. “Don’t worry! Come out and sing, because nobody’s going to hear you,” he likes to say. “And I’ll be wearing my outfit, so they’re not even gonna see you.”

Since Clemmons has been at Middlebury, teaching has become as important to him as performing. “I am so deeply moved and touched by their curiosity and dedication,” he says of the students. “I love it when they shine, to see them doing what they do and doing it well.”

At the college, his official title is Alexander Twilight Artist in Residence, but Clemmons prefers “Diva in Residence.” In addition to teaching his wildly popular J-term class on the American Negro spiritual — which attracts everyone from music majors to jocks — he has become the unlikely face of St. Patrick’s Day.

Every March, Clemmons decks himself out in green and gives a concert of Irish music, which he says he fell in love with after discovering “Danny Boy” as a young man. He felt a kinship between those songs and the spirituals he grew up with — both musical cries for freedom.

Clemmons came to the college from New York City in 1997. Before and during his star turn as Officer Clemmons on “Mister Rogers’ Neighborhood” — he appeared on the show between 1968 and 1993 — he was a singer with the Metropolitan Opera Studio starting in the late ’60s. He performed his favorite role, Sportin’ Life in Porgy and Bess, more than 200 times.

Later, Clemmons founded and traveled the world with the Harlem Spiritual Ensemble, performing the traditional tunes he had heard his mother sing as he was growing up in Youngstown, Ohio.

A visit to his Middlebury home reveals much about Clemmons. On his coffee table, turquoise and amber jewelry spills out of hand-painted boxes. He isn’t fully dressed without at least five pounds of these stones draped around his neck, on his fingers and wrists and, on special occasions, dangling from one ear.

On his bookshelves Clemmons stores histories of the American Negro spiritual and biographies of opera legends such as Leontyne Price and Luciano Pavarotti. On his walls are portraits of his heroes: Martin Luther King Jr., Barack Obama, Fred Rogers. On the leather couch, an embroidered pillow proclaims, “The Queen Doesn’t Cook,” which is misleading; Clemmons cooks often and well.

He’s known in the neighborhood for the outrageous quantity of colorful Christmas lights he wraps around his house at the beginning of winter and leaves up at least through the end of March. In any given email, Clemmons uses more exclamation points than letters of the alphabet. He gives everyone he loves a nickname, and sings adoring ditties to his dog, Princess, the Tibetan terrier he loves like a child.

“I’m 68 and I don’t have a partner,” says Clemmons. “But I’ve discovered a certain kind of contentment here.” He admits he never imagined he would end up in Vermont, let alone feel such a sense of belonging here. “This is a place where I can serve,” he says. And to serve, he adds, “is so plain, so uncomplicated, so fundamental.”

Clemmons says he would love to keep teaching, but he just can’t keep up the pace anymore. “It’s better that I retire now, while I still have gas in my tank,” he says. He’s hoping to find more time to travel, especially to Nepal and India, and finally to make it down to Florida for the Yankees’ spring training — he’s a huge fan.

So, we’re dying to know: What’s he wearing for the concert this Friday?

“Well, that’s still a work in progress,” Clemmons says, throwing his head back in laughter. “I usually leave it to the last minute. There’s gonna be a fun part and something new, that much I can say.”

François Clemmons performs Friday, May 10, at 8 p.m. in the Concert Hall of the Mahaney Center for the Arts at Middlebury College. Free. Info, 443-6433.