Before Banking on Marijuana, Growers Can Learn From the Recent Hemp Boom-to-Bust 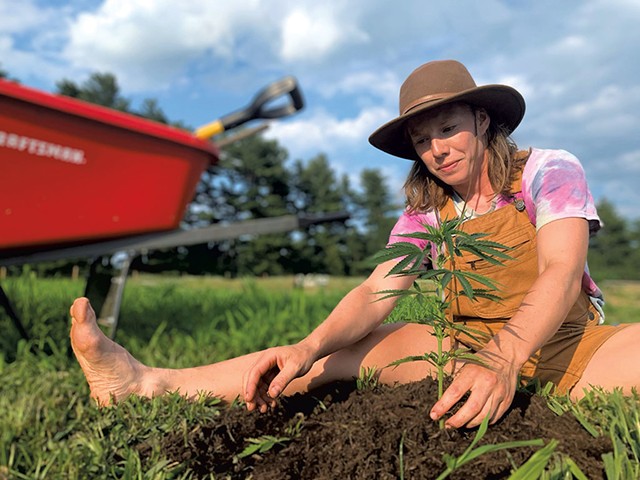 Just two years ago, hemp looked like a crop that could inject some life into Vermont's flagging agricultural economy. At Statehouse meetings, entrepreneurs, lawmakers and regulators who were giddy with optimism talked of harnessing the profits of the fast-growing industry for societal good.

One of them was Carl Christianson, who had just set up a hemp processing facility and testing lab in a newly purchased 10,000-square-foot former bread bakery in Brattleboro.

But a nationwide rush to plant in the summer of 2019 led to an oversupply in the fall. Would-be purchasers backed away, so many farmers left their plants standing in the field and took a loss. Others harvested their crop and were left high and dry by buyers who never paid up.

In March 2021, Christianson's company, Northeast Processing, declared bankruptcy. Though he recently built a house in Vermont, Christianson is looking at job offers — none of them local.

"It was a pretty brutal one-two punch," Christianson said of the crash in prices and the pandemic. He has no wish to try again as a hemp entrepreneur.

"I really care about the people that I have met over the years, and I really want to see people succeed," Christianson said. "It's been tough across the board. I'm hopeful that there remains a solid marketplace in the Vermont ecosystem."

Christianson isn't the only entrepreneur who flamed out. Stories abound of inexperienced growers who had hoped to cash in on the hemp gold rush, only to learn firsthand why some have dubbed the industry the Wild West.

Yet there are signs that a market not only remains, but is staging a comeback. By this point in 2019, the state had issued registrations for 250 growers or processors, said Stephanie Smith, cannabis quality control policy administrator for the Agency of Agriculture. In 2020 — the year registration fees rose sharply and the registration window didn't open until March — that number dropped to 30.

So far this year, it's rebounded to 235 growers and processors, Smith said.

Some of them, like Jahala Dudley, are staying in the game until next year, when legal retail sales of marijuana begin. Dudley made headlines in 2019 when police mistakenly seized more than 100 pounds of the legal, Vermont-grown hemp that she and her business partner had shipped to a client in New York City.

She still grows hemp, along with flowers, on land in Colchester. But earlier this month, she bought a large property in central Vermont with greenhouses, processing space and fields where she plans next year to grow cannabis that contains tetrahydrocannabinol, or THC — the stuff that gets you high.

"There are going to be a ton of small farmers applying for licenses to grow next year when the THC thing opens up in Vermont," she said. "The majority of these hemp farmers are not growing hemp because they want a future in the hemp business; they are growing hemp because they want to have a future in the THC business, and I think it's a stepping-stone."

That's what attorney Tim Fair, co-owner of Vermont Cannabis Solutions in Burlington, is hearing from clients. In 2019, Fair said, the law firm's phone calls about hemp outnumbered those about marijuana by a ratio of 9 to 1. In 2021, that ratio has flipped.

"Most people are now positioning themselves to get ready for the Vermont adult-use market, which will absolutely dwarf the hemp and CBD market," Fair said. "We're talking about a $200 million-a-year industry that has to be created in the state. If it takes one year, two years, it's happening."

Money will surely be made, but it might take time for the market to form, warned Christianson, the hemp entrepreneur. Vermont's delays in legalization have let nearby states such as Maine and Massachusetts gain a foothold. New York's legislature just reached a legalization deal, too, and recreational sales there could start in a year or so.

"I would like to think that it will be more like the beer industry, where there are high-quality craft options, as well as a mass market, mass-produced commodity product," Christianson said.

"But if federal legalization comes down the road and it fully leads to a federal marketplace and true commoditization the way hemp was," Christianson added, "[that] makes it even more difficult for niche, high-quality producers to do anything more than having small products available on a local market."

Those hoping to participate in the legal adult-use marijuana market would do well to study Vermont's roller-coaster ride with hemp, veterans of the industry say.

Spurred by the 2018 federal Farm Bill, which legalized the production of hemp as an agricultural commodity, hundreds of people planted it in Vermont in the spring of 2019. Most hoped to sell the plants for the production of cannabidiol, aka CBD, one of many compounds in cannabis that are sold as alternative health products.

"I'm hopeful that there remains a solid marketplace in the Vermont ecosystem." Carl Christianson tweet this

Private businesses and the state Agency of Agriculture, Food and Markets heavily promoted growing Vermont hemp for CBD. They saw it as a specialty crop that would stand out for its high quality from the commodity product that was being produced on huge farms in states such as Colorado and Oregon.

He'd been hired in 2019 to work as entrepreneur Jeffry Knight's liaison with about two dozen farmers who had agreements to sell their crop to Knight, owner of VT-CBD Labs in Winooski.

At first, Gibson said, the hemp crop seemed like an ideal way for dairy farmers to prosper after several years of low milk prices.

"They were pulling in family and friends and neighbors; it was like what farming used to be like," Gibson said. "It was very social, and it was exciting. We were all learning about this crop we had never grown before."

But in the fall of 2019, hemp flooded the market in Vermont and other states. Some farmers quickly learned they didn't have the capacity to dry or store the plant material; others just couldn't find buyers. And some buyers disappeared.

Knight was one of those, according to Gibson.

"As far as I know, nobody has been paid a dime for anything they grew in that group," Gibson said, adding that Knight fired him in December 2019 and moved to Florida.

The last Gibson knew, the five-acre hemp crop he and his wife grew and harvested that summer was in Winooski, being prepared for processing.

"I haven't heard a thing for over a year, and I have not inquired," Gibson said. "I am trying to walk away from it."

Knight's lawyer, Pietro Lynn, said Knight is just waiting for prices to rebound so he can sell the dried flower he's storing in a Winooski warehouse.

Knight is registered with the state as a processor this year, according to Smith.

"He lives in Florida, but the business is still here," said Lynn. "It's still active and has every intention of processing and selling the hemp, and VT-CBD Labs continues to have good relationships with its partner farmers." He acknowledged that Knight is facing one lawsuit from a farmer.

Gibson isn't the only grower who feels burned.

Patrick Sullivan, who owns Ananda Gardens in Montpelier, said he grew two acres of hemp last year under contract for a company called CBD Vermont. Sullivan says he was promised $50,000 for his crop and got only a bad check.

According to Vermont State Police, the owner of that now-defunct Waterbury company, Douglas Bell, shorted 15 farmers, including Ananda Gardens, the money he'd promised for hemp harvests. Estimated cumulative losses were about $500,000.

"Legally, there was no route for us," Sullivan said earlier this year on a University of Vermont Extension "Ag Engineering Podcast." "The guy who scammed us claimed he didn't have any money; the lawyers said we would have been looking at $20,000, $30,000 of legal fees going after someone who claimed they had $17 in their bank account."

The experience soured Sullivan and his wife on cannabis altogether. "We do not want it on the farm," Sullivan told Seven Days.

"I'm sure there are great people associated with hemp, and there are people with good intentions," he said. "It's just not where our interests are. We don't feel good about it; it doesn't fall in line with our overall mission." He and his wife operate a 150-member CSA.

"I had several clients ripped off by him," said Fair, who noted that last year's depression in the cannabis market hit his bottom line, too. He and his business partner, Andrew Subin, started taking general legal work to pay the bills.

"There were a lot of handshake deals, things weren't contracted; there were a lot of unsavory characters in the space," Fair said. "But it's hard to say it was all intentional fraud. I don't believe much of it was. People made an agreement to pay more at the beginning of the season than it was worth at the end of the season."

The crash affected Christianson, who has a PhD in chemistry and who was seen as one of the local leaders when the hemp industry was presenting its case to lawmakers in early 2019. Christianson had obtained a mortgage from Brattleboro Savings & Loan to buy the former bread factory, and he had 12 employees when the COVID-19 pandemic hit.

Gibson, the former VT-CBD employee, said he's pretty sure none of the 25 farmers he worked with in the summer of 2019 plans to grow hemp again. He's still advising farmers at his new job, with Northeast Agricultural Sales in Lyndonville, and said a few of those farmers have small hemp crops.

"They have kept their business scope within the realm of what they can risk," he said.