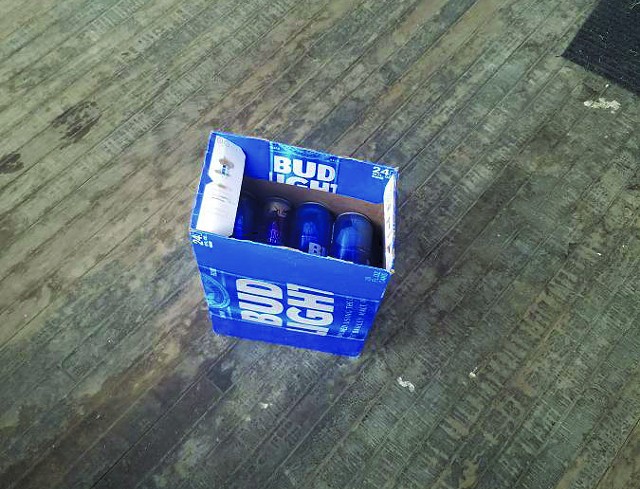 This Bud's for you — and it's free of charge.

A Berlin woman looking to unload half a case of Bud Light beer took to Craigslist to find someone in need of subpar suds.

"This bud light has been sitting on the porch all winter so probably was frozen and thawed," Becky Grenier wrote in an ad she posted on April 27. "If you have any use for it, come and get it. There are 15 unopened 16oz cans left. ID will be checked to make sure you are over 21 if it is not obvious."

"He wanted to throw it away, but I hate wasting things. And my family drinks Bud Light, so we just left it on the porch to give to them but kept forgetting it for the whole winter," Grenier wrote in an email to Seven Days. "Now it has probably frozen and thawed, which makes it flat, so even worse than 'fresh' Bud Light. I wanted to see if anyone wanted it before throwing it away."

She went to Craigslist, where other items available under the "free stuff" section include cardboard boxes, bubble wrap, a tether ball post, a 1976 pop-up camper and a "lightly used" NordicTrack ski machine.

But in a state known for Hill Farmstead Brewery and Heady Topper, suitors have not exactly come in droves for the skunky suds. To date, this reporter was only the second person to respond to the "Free Bud Light" ad.

"Some guy wrote to tell me 'Drink it its still good' (that grammar) but did not otherwise seem interested in coming to get it," Grenier wrote.