Beauty and the Barn 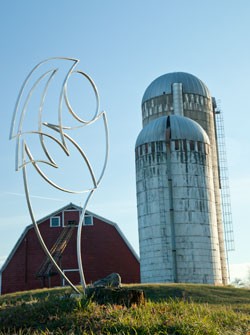 Pond Road in Shelburne wends past an operating farm before gradually climbing a hill and arriving at Shelburne Pond Studios, where more than a dozen artists hone their respective crafts in a converted dairy barn. The place isn’t prominently marked, but you’ll know you’ve found it by the swooping aluminum, smooth marble and gnarly reclaimed-metal sculptures all over the grounds.

Those pieces are the work of Vermont sculptors James Irving Westerman, Bruce Hathaway, James Santos, Leila Bandar and Katharine Stockman, the stone carver who owns the property with her husband, Rad Romeyn. The sculpture display was her friend Hathaway’s idea. Bemoaning the dearth of year-round sculpture parks in Vermont, the metal sculptor suggested that Stockman turn her 12 acres into just such a place, where area artists could display works that are for sale. Stockman happily agreed; she takes inspiration from the works, which she calls “constant eye candy.”

Stockman and her husband moved to Shelburne from Cambridge, Mass., in 2005. She set up a stone-carving shop in an outbuilding, and the couple started a job-site waste-management recycling company in the barn. But eventually, she says, they ran out of people in the area looking for salvaged materials.

So, about three years ago, after listening to artist friends complain about how difficult it was to find affordable studio space in Burlington, Stockman decided to convert the barn, stall by stall, into low-cost artist studios.

Fellow stone carver Dan Webster was the first tenant. As word got out, the couple converted more studios. “We just started marching toward the back of the barn, using two cow stalls at a time and using a lot of our recycled materials,” Stockman says.

Over the next year and a half, the couple converted the entire barn. Now, 14 artists work in a dozen studios, and the waiting list is always full — not surprising, considering the rent: $175 to $300 per month. “We’ve never, ever had a vacancy,” says Stockman.

The first thing you see when you step into the barn is the informal gallery space where resident artists exhibit their work during First Friday art walks and statewide open-studio events. It still feels a little like a barn in there: Artwork hangs from stanchions, and feed buckets are arranged like objets d’art on the concrete floor.

In mid-December, the gallery was filled with large, energetic mixed-media paintings by Christine LaMar; painterly monoprints by Lyna Lou Nordstrom; and intricately sewn fiber collages by Jill Abilock, among other works.

The breadth of artistic endeavors going on simultaneously at Shelburne Pond Studios is impressive. In one sunlit but unheated studio (she likes it that way), retired librarian Ruth Murphy incorporates antique bottles and jasper stones into her hand-beveled glassworks. “I have my big machines here because I can’t fit them in my home,” she says.

Across the hall, Laurel Fulton and Jenn Cullen share a much toastier studio. Cullen illustrates in pen and ink, gouache and watercolors; Fulton paints Vermont landscapes, often with swirling skies and exuberant colors. Lately, she’s taken to tracing around the knots in reclaimed-wood cabinet doors with paint. “I started to see landscapes in the grains of wood,” Fulton says.

A few doors down, Lin Warren has recently returned to her art after taking time off to raise children. She says she’s been thriving creatively since she set up shop at Shelburne Pond Studios. “I haven’t really been with so many other artists since college,” she says excitedly. The walls of her space are almost entirely covered by her mixed-media paintings, in which she favors big, expressive brushstrokes and metallic paints.

Next door, bookbinder Elizabeth Rideout shares a studio with Abilock, who specializes in book arts. The pair holds workshops in this spacious studio, which features many imposing and beautiful tools, such as small nipping presses, a letter press, a guillotine and a 300-pound book press they lovingly call Gigantor. Abilock used to work as a Japanese translator; she named the hulking piece of equipment after the flying-robot manga character.

At the far end of the barn, Dana Dale Lee shares a studio with his wife, Stephanie Bush. She often paints self-portraits in which she’s draped in so many layers of vividly colored fabrics that she almost disappears beneath the swaddle. Lee, who manages the art department at the Community College of Vermont, has a darkly comedic self-portrait of his own on display: His head is impaled on a bloody two-by-four.

It’s not what most people would expect to see inside a picturesque Vermont barn, but it’s part of what makes Shelburne Pond Studios worth a visit: You never know what you’ll find around the next cow stall.