Beauty and the Bank 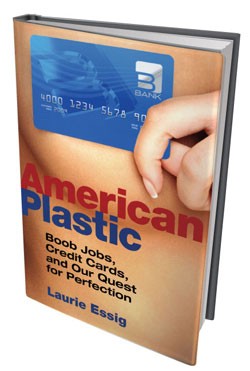 We all know the role subprime mortgages played in sending the U.S. economy into a tailspin. But how did breast implants contribute to the crisis?

It may sound like the start of a Kathy Griffin sketch. But Middlebury College sociology professor Laurie Essig is dead serious when she argues that the stunning rise of plastic surgery is a leading symptom of Americans’ problem with that other kind of plastic — credit.

Essig makes that connection right in the title of her new book, American Plastic: Boob Jobs, Credit Cards, and Our Quest for Perfection, which traces a sea change in American culture. Once considered an indulgence of the rich and vain, cosmetic surgery went mainstream. According to the American Society for Aesthetic Plastic Surgery, the number of cosmetic procedures (including injections such as Botox) has quadrupled in the past 20 years; in the last decade, more than 10 million were performed each year. And 71 percent of the people getting those procedures earned less than $60,000 annually, according to 2005 data. Thirty percent earned less than $30,000.

Why did middle- and even low- income people start getting “work done”? Essig pinpoints two causes, both going back to Ronald Reagan’s economic revolution. First, for-profit medicine and deregulated banking made it easy for patients to go under the knife today and pay tomorrow (or for the next 10 years). Second, the concentration of wealth made middle-class Americans insecure, giving them new motivation to get a face-lift or a tummy tuck to improve their chances in a squeezed job market.

In short, Essig argues provocatively, cosmetic surgery isn’t about a personal quest for beauty — it’s about economics. Whether the typical white female patient uses Botox injections to hold on to a money-making mate or a job, she sees them as a rational economic bet in a winner-take-all game. Essig writes, “Neoliberalism ended up written on the bodies of ordinary Americans as plastic surgery.”

To reach that conclusion, she researched the credit options open to prospective patients. (Before the economic downturn, there were many.) She also talked to more than 100 of those past and future patients — and some of their doctors — at cosmetic surgery conferences.

It’s a self-selected sample who may not represent the average American’s attitude toward cosmetic surgery. Still, Essig’s quotes from conference attendees make for compelling — and chilling — reading.

One woman who considers surgery an “investment” tells the author, “It’s about how you look, not what you do.” Another woman says her wrinkles depress her; she needs a smooth face “to be happy again.” Joan Kron, an editor at Allure magazine who’s had three face-lifts, tells Essig it’s inevitable that she will get one, too: “You’re too ambitious not to do it. Writing is a young person’s game.” No one argues that surgery is a surefire path to success, but everyone agrees that it can’t hurt — and if you can improve your image in the mirror and your chances in life, why not?

Plastic surgery, Essig discovers, is also about self-transformation. Yet one of the surgeons she interviews has a more jaundiced view of the notion that implants and face-lifts change lives. “I wonder,” he says, “if most of [my patients] realize it’s all a bunch of fiction.”

Do people have a choice in this pursuit? Or are they victims of what Essig calls the “plastic ideological complex”? While she acknowledges the role of individual motives in going under the knife, the author firmly believes there’s “a conspiracy of capital to make us feel so badly about the ordinary ugliness of our bodies … that we will buy plastic beauty.”

Academese phrases such as “plastic ideological complex” will alienate some readers, and Essig occasionally reads the “texts” of popular culture too straight. She doesn’t seem to realize, for instance, that many women watch plastic-pushing TV shows such as “Dr. 90210” for their freak-show comedy, not because they aspire to be patients themselves.

For the most part, though, the book is engaging and accessible. The questions Essig raises are worth asking: Even if it’s increasingly possible for people to stay young looking, is it worth it? Should we stake our economic futures on our bodies? Is it possible to suggest alternatives without coming off as a beauty-shunning ascetic?

Those questions remain relevant, though Essig started her research six years ago. One might expect the economic collapse to have made a serious dent in “frivolous” expenditures such as cosmetic surgery. And one would be wrong — the industry saw only a 2 percent dip in the number of procedures in 2009, Essig notes. Looks like people are still choosing plastic.

SEVEN DAYS: Tell me about the genesis of the book.

LAURIE ESSIG: There are a lot of transgender people living in Burlington, for various reasons, and I was interviewing some of them. They had all had top surgery [bilateral mastectomy]. I asked, “Where did you get the money for that?”

One of them said, “Oh, you just go into any cosmetic surgeon’s office and sign on the dotted line.” I went home and started Googling “cosmetic surgery and credit.”

I started looking at how cosmetic surgery was paid for. I was trying to work out in my own head how neoliberalism had created this incredible transfer of wealth, and health debt had been part of that transfer... Cosmetic surgery became this subprime mortgage crisis of the body, in my mind.

SD: In the book, you relate how in 2007 two investment bankers from Wachovia called you for advice. You’re a sociologist, not an economist. How did that happen?

LE: They were interested in investing in the cosmetic surgery industry, and they had seen something I’d written in the popular press. It ended up being this very interesting conversation where I talked about debt, and I said, “The credit markets are going to crumble, because you can’t keep extracting blood from a turnip.” This was not just my thinking. I was reading economists who weren’t accepting the prevailing thinking that deregulation is good. If it were me, I wouldn’t be investing in [cosmetic surgery]. I was wrong about cosmetic surgery, but I was right about ... credit making us poor.

LE: There are walk-in Botox clinics here. You can get cosmetic surgical procedures here, and people do. The difference is, in Vermont you don’t mention it as often. People aren’t quite as open as they are in Los Angeles or even New York, where I’m from. I don’t think there’s any evidence Vermont is resisting [the trend].

SD: Many of the people you interviewed for the book believe that having rejuvenating procedures will help them on the job market. Does research back that up?

LE: There are some economic studies that show that, in fact, cosmetic surgery doesn’t pay off. You can’t solve structural problems with individual solutions. If we defund higher education, getting a face-lift isn’t going to fix that. Even worse, if you’re not terribly well off, and you’re taking out debt [for cosmetic surgery], you’re going to end up worse off, because debt makes us poorer.

I never have interviewed anyone who wasn’t happy they [had cosmetic surgery]. People don’t necessarily regret it. A lot of people regret the debt they take on. Cosmetic surgeons have told me over and over that they don’t like people to take on high levels of debt. They actually find that the patients who pay the highest amount on credit are the least satisfied.

SD: In the book, you suggest that women who are tempted by cosmetic surgery form “reality-check groups.” Have you formed one?

LE: I think it’s not a bad idea. We all have a bit of magical thinking. Right before I went up for my tenure review, I wondered if I should get [facial] fillers. I had to really think about it. OK, that’s a vacation with my kids. That’s a month’s worth of mortgage. I said to friends, “What do you think?” They would say to me, “No.”

The more insecure we are about the future, the more we’re convinced that if we just looked younger, we would be secure.

SD: Did you get tenure?

LE: I did. And I didn’t get the fillers.

Essig, who’s 45 and lives in Burlington, says researching American Plastic changed her view of the world — for instance, now she can’t help noticing when acquaintances get facial fillers, she notes in a phone interview.

The book has drawn popular attention — last Friday, Essig argued her thesis in the Washington Post. She says she wrote the book “not for sociologists, just for smart people who might want to think about what’s going wrong in a different way than other people are explaining it. I’m hoping people read it who could give a crap about cosmetic surgery.” And, she adds, she hopes people who don’t think they give a crap about economics will learn why they should.