Vermont chefs cook on one of the world's great culinary stages 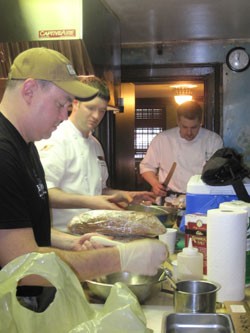 “It smells like an old McDonald’s,” agrees Hen of the Wood’s Eric Warnstedt.

It’s 10:30 a.m. in New York City. Atkins and Warnstedt arrived half an hour ago at the James Beard House, along with Atkins’ wife and pastry chef, Lara. They’re making dinner tonight for 78 New Yorkers — showing off for an elite metropolitan crowd the dishes Vermont diners have come to know and love.

The Beard House is part of the foundation created by Julia Child, among others, to honor the father of American gourmet cooking after his death in 1985. Its annual awards, presented since 1991, recognize not just chefs but also writers, TV personalities and even old-time snack bars, such as Burlington’s Al’s French Frys, which is currently up for the “American Classics” award.

In life, Beard ran his home as a salon, welcoming foodies of all stripes into his kitchen. Today, the house hosts an opulent dinner nearly every night of the week. For chefs, being asked to cook there is often seen as a step toward a future award.

The Atkinses and Warnstedt are here with Sean Buchanan of Solstice at Stowe Mountain Lodge and Mark Timms of Norma’s at Topnotch in Stowe, who’s responsible for this gathering. Last May, Timms cooked a solo “Vermont Farm to Table” dinner at the Beard House, which included a “Miniature Al’s Burger.” He so enjoyed the experience, he says, that he decided to assemble a team of other noteworthy Green Mountain chefs. The Kitchen Table and Hen of the Wood chefs were semifinalists last year for the Beard Foundation’s Best Chef: Northeast prize. They repeated the feat this year, along with the Bluebird Tavern, which was short-listed for Best New Restaurant.

In the Beard House, equipment difficulties are already rife. The small kitchen is well stocked; it’s just a matter of finding the equipment. Warnstedt isn’t sure he can use the smelly fryer to crisp up the Pete’s Greens parsnip chips that will sit atop his Maine Lobster With Hen of the Wood Mushrooms, Waterbury Cider and Animal Farm Brown Butter. Lara Atkins has asked for an ice cream machine to make the centerpiece of her famous Open-Faced Chocolate-Coffee Sundae With Candied Almonds. Beard House kitchen manager Samil Compere says he’ll dig one out for her.

Compere, who has been at the Beard House for 14 years and assisted a who’s who of top culinarians in that time, is eager to aid the chefs at work.

Timms is joined by his kitchen’s p.m. supervisor, Matt Lunde, to help craft his Deconstructed Beef Wellington With Pickled Tongue, Braised Heart, Oxtail, Demi-Glace Aspic and Virtual Egg. Later that afternoon, Aaron Josinsky and sous-chef Nate Wade of the Bluebird Tavern; and Rogan Lechthaler, chef at Verdé in Stratton, and his two sous will arrive to finish their prep, too.

A final guest chef, Lee Duberman of Ariel’s Restaurant in Brookfield, was too late an addition to the group to cook her own dish, so she’s assisting the rest of the team. This mostly means operating as Buchanan’s eyes. The Solstice chef left his trademark black-framed specs at home and has torn one of his contacts, without which he’s legally blind. “Anybody see a garbage can?” he calls out. It’s right in front of him.

Most of the team is slightly worse for wear. After the six-hour drive down the day before, they had drinks and snacks at the Breslin Bar & Dining Room adjacent to their lodgings at the Ace Hotel — then went to Craftbar, where Hen of the Wood server Scott Hirschberg’s brother Lauren is chef de cuisine. Hirschberg and several other HOTW servers joined the party, which then split up between free desserts at Craft and an epic tasting at the Gramercy Tavern. The latter group ate until after 1 a.m. before heading out for more drinks.

Now, as the chefs sizzle, Hen of the Wood manager Will McNeil stands out of the way, beside the Soviet-era map on the kitchen wall, with his phone tuned to Twitter. This morning finalists for the Beard awards are being announced.

The news isn’t good: “Sorry, Eric, you didn’t make it,” McNeil tells his boss. Steve and Lara Atkins are also out of the running.

Better luck next year to the Bluebird, too. Timms says he hopes the exposure of cooking this meal will help the group raise its profile before next year’s voting.

How do you get to Carnegie Hall? Practice. It was the same for Team Vermont before its Beard House debut.

On February 1, the whole group assembled in The Kitchen Table’s modest work space to try out its dishes on Vermont diners. The dinner, which benefited the Vermont Campaign to End Childhood Hunger, quickly sold out. Timms says to expect similar benefit dinners soon. The members of Team Vermont will also be among the cooks serving up small plates this summer at the Topnotch Star Chef Food & Wine show, another event that benefits the VCECH.

The Tuesday before the New York dinner, Timms and Lunde began prepping their dishes, including the Wellington and cones of Caesar salad ice cream that will be passed as appetizers. Early in their day of cooking at the Beard House, babyfaced Lunde — whom Buchanan has dubbed “Chuckles” for his equally childlike laugh — estimates that he has already spent at least 12 hours on their creations on top of his full-time duties at Norma’s.

At lunchtime, Buchanan, Warnstedt and McNeil break for Thai food at Chelsea Market and a visit to the Food Network. The Norma’s and Kitchen Table crews choose to stay in the kitchen. Lara Atkins, who is dressed in her KTB T-shirt and a ladylike necklace of gray pearls, doesn’t want to make the hike in the pouring rain. Plus, Compere has found an ice cream machine, which Lara calls “smaller than our home one.” Each minuscule batch takes her 45 minutes and yields a product less frozen than she’s used to.

Over at the Meatpacking District office of the Food Network, Solstice’s Buchanan is making connections. He got to know several network employees while working on Bobby Flay’s “Throwdown” with Bove’s. Today, by prearrangement, he’s demonstrating Vermont cheeses and beverages to buyers and test-kitchen employees. The Food Network folks are enthusiastic about a couple of cheeses, Lazy Lady Farm’s Barick Obama and Consider Bardwell Farm’s Rupert. But it’s only when Buchanan begins pouring the Eden Ice Cider that busy test-kitchen cooks flock to him from all over the studio. The TV folk are so taken, they float the idea of arranging a future episode of “Iron Chef America” featuring Team Vermont.

Soon after the group returns from its adventure, Lechthaler and Josinsky join the fold in the Beard House. The kitchen is so small that the chefs and their helpers spread out into the Greenhouse Gallery, in view of the garden where Beard once made a habit of bathing al fresco.

Appetizers and Banfi wines won’t be passed until 7, but guests begin trickling in around 5:30. They include Deborah Schapiro of Edible Green Mountains and Eleanor Leger, maker of Eden Ice Cider. Lechthaler’s family and friends fill a table in the room where the chef was preparing his circles of Wanabea Farm Country Rabbit Pâté With Long Trail Brewmaster Series Imperial Porter Mustard and Pickled Turnips just an hour earlier.

When the team members are announced, Lechthaler enjoys a special barrage of cheers and applause. The main dining room is full of groups of New Yorkers who say that they, like Martha Stewart, enjoy Verdé’s creative local cuisine when visiting Stratton.

But each chef has his or her constituents. Many of the diners — mostly New York foodies, who have each paid $165 for the meal — have visited Stowe Mountain Lodge and Topnotch. Others have tried the Beard-nominated restaurants on recent trips to Vermont. This is an informed audience.

Others are more intrigued by Timms’ avant-garde dish. One man says it’s as good as or better than anything he has had at wd-50, the restaurant of molecular wizard Wylie Dufresne. No one seems to balk at the presence of multiple cuts of offal therein.

Lara Atkins’ dessert has its fair share of fans. Several guests remark that they wish they could buy a bag of her candied almonds. They’re in luck. Those, as well as a treat from the Vermont Brownie Company and a brick of Cabot cheddar, are packed into each goodie bag diners receive as they exit into a downpour.

Team Vermont returns to the Ace for a night of beer, burgers and geneva, the Dutch precursor to gin, with the hotel’s GM, Jan Rozenveld.

Says team leader Timms, addressing the rest of the chefs: “This is one of those moments that you try to store as a memory. I just wanted to let you know I couldn’t have had a better group to share it with.”