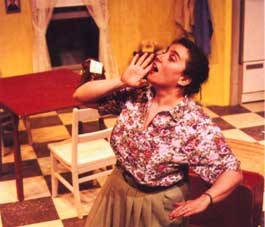 Shirley Valentine has just received an impossible gift from her friend Jane: a free plane ticket to Greece, where Jane will be on holiday for two weeks. How to explain that leaving a house, husband and young son simply isn't in the cards? There's laundry to do, eggs to fry and cheap wine to drink during lugubrious afternoons alone. Proper English housewives don't just pack their bags, put on sun hats and take off for the deep blue Aegean… do they?

This is the first question Shirley ponders in Shirley Valentine, a charming and enlightened comedy that puts women in their place Ñ which turns out to be wherever they damn well please. Lost Nation Theater's production of this one-woman show, performed as three anecdotal monologues, confirms Kathleen Keenan's role as one of Vermont's most talented actresses. Shirley Valentine concluded a two-week run last week at Montpelier City Hall Auditorium.

In the first act Shirley sits in her bright, monochromatic kitchen, sipping from her wine glass and telling the audience about her family: an ultra-conventional husband, melodramatic college-age daughter and young, unsuccessful son. The boy recently ruined the school's annual passion play by reinventing the chronology of the New Testament. As Joseph, he refused to let the innkeeper turn him and Mary away; thus, no sleeping in the manger, and certainly no miraculous Virgin birth.

Hilarious as her account is, Shirley makes it clear that child-rearing isn't her passion, and neither is making supper for her loutish husband, who shoves the food away with disgust Ñ right into her lap. Keenan gamely conveys her character's life of enduring failure and contempt Ñ even her old schoolmarm told her she was worthless. You're definitely rooting for her when she does the unthinkable: buys a swimsuit, stiffens her upper lip as only the English can, and calls a cab for the airport, without telling her husband.

The first two scenes take place in Shirley's kitchen as she ruminates on whether to go to Greece, and the second act shows her sunbathing on the beach, where she sips from a bar glass and walks barefoot on the sand. The Shirley who literally talks to the walls in her kitchen is utterly different from the freewheeling Shirley of Greece, who badmouths the local tourists, dines alone by the ocean and "goes boating" with a handsome local waiter.

But Keenan, co-artistic director of Lost Nation Theater, makes the demanding character changes seem effortless. She's taken on a formidable project with Shirley Valentine: In addition to memorizing hundreds of lines, she's mastered a modern Cockney dialect. Her neurotic-yet-plucky working-class Brit is neither the wide-eyed Mrs. Harris nor the passive, fragile Eliza Doolittle. And this play isn't about a Henry Higgins or classy French dresses; it's about zest for life.

She isn't the first Vermonter to take on the role of Shirley; in February last year, Grace Kiley performed her own rendition at the FlynnSpace in Burlington. It's curious, actually, that Lost Nation's production comes so soon after its predecessor, especially considering the similarities: Both feature strong actresses who are expatriates of New York. But there are differences in the tone of their performances; where Kiley played up Shirley's underlying misery, Keenan is a delightful spaz. The script is rife with low points Ñ Shirley faux-threatens to stick her head in the oven and switch on the gas Ñ but Keenan focuses on the play's dark comedy.

As in many stories about women finding themselves, failure seems ever-imminent in Shirley Valentine. As she narrates, Shirley impersonates the remorseless antagonists in her life: the suspicious neighbor who talks snidely through her teeth; Jane, the "chum" who abandons her in Greece to have dinner with a fellow British vacationer; and most oppressive of all, the gruff and neglectful husband, who never appears onstage but is somehow present even when he's in a different time zone. The tragedy of the situation never dampens Shirley's good humor.

After all, her only real impediment is her own damaged self-esteem. "I just know that if you described me to me," she says early on, "I'd think you were telling me a joke." But then she's off on a rant about Sigmund Freud and how her husband has never heard of a clitoris. In the second act, after she has gained some confidence, Shirley allows the Greek waiter to find what her husband cannot.

Willy Russell's script is chock full of female affirmation, but Shirley herself is standoffish about "feminists." She considers Jane to be one because "she reads Cosmopolitan." But her friend ultimately fails the independence test. Russell keeps misinformed Shirley away from -isms. The play is too earthy and personal to shove her under an ideological umbrella, which distinguishes it from, say, Wendy Wasser-stein's Heidi Chronicles: Shirley's quest is personal, not political.

Keenan could probably perform just as brilliantly in an empty London warehouse, but Lost Nation's set for Shirley Valentine is impressively detail-oriented: Her kitchen has a real stove and refrigerator, stray magazines and a full cabinet of spices. Greece is portrayed with a cafŽ table, a beach blanket and painted sand.

Keenan doesn't let her settings steal from the action, however; she's the one who molds the cheery kitchen into a suburban prison, who transforms a towel and sunscreen into an ancient island, and who finally, with Shirley's final epiphany, renews our faith in human possibility.