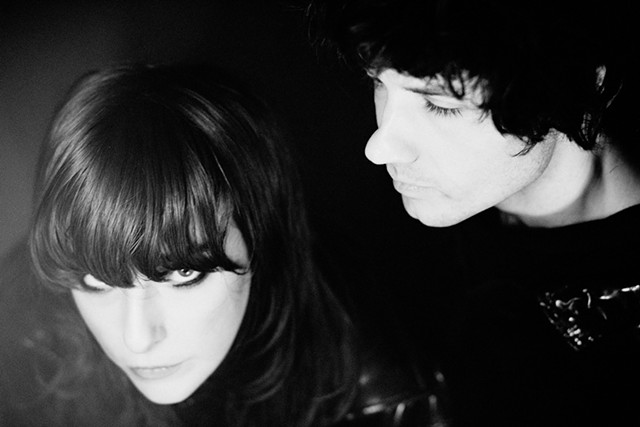 In the 21st century, Beach House have come to define the indie music subgenre known as dream pop. The Baltimore duo's music floats in a hazy realm full of woozy organs, lustrous synths and front person Victoria Legrand's unearthly vocals. "Mysterious" is the watchword. As Pitchfork contributor Jayson Greene pointed out in his glowing review of the band's 2018 album, 7, "Over six albums, Victoria Legrand and Alex Scally of Beach House have offered the same enticement: There's a place I want to take you; help me to name it."

Past interviews from Legrand and Scally indicate that the group prefers not to dwell too much on the why of things. Rather, Beach House exist solidly in the now. Even as their sound expands, shifts and augments throughout their seven-album discography, a sense of unshakable stillness remains, rooting them firmly in the present.

Seven Days caught up with Legrand by phone.

SEVEN DAYS: I'm always curious about the later phase of an album cycle. 7 came out a year and a half ago, and you've done the big press and toured extensively. How does your connection to your newest music change or grow throughout that experience?

VICTORIA LEGRAND: I think that the songs are really now firmly planted in the fabric of our lives. We still like playing them, and we still have fun. Every time we play a song in a different venue, they all feel different. Which is probably why we keep playing shows. We're very aware of the fact that things do continue to change and manifest with time. Nothing stays the same, so it never really gets boring.

The things that get boring are the things that have absolutely nothing to do with the art side of it. Being in dirty bathrooms all the time — that gets really old.

SD: Do you hold off on thinking about what's next until you're well and truly done with a cycle?

VL: I don't think we ever turn off fully. I tend to go dormant in certain ways. I don't always feel inspired. But I'm always open to it happening. Our doors have never been fully shut. There's always maybe something there. Somebody always has an idea. But you can't predict what will happen. It accumulates. We have things inside of us, little bits and pieces. But it's too soon to say what it'll become. Every single album and every single experience, things have emerged because of these adventures [on tour].

SD: Once upon a time, Beach House played a humble little club in Winooski called the Monkey House. What have you had to give up as Beach House transitioned from playing small rooms to bigger venues?

VL: There's definitely something extremely special about playing smaller rooms. I think Alex and I do miss that in a certain way. There's an intimacy. The songs can just really exist in this very pure form when you're playing for 100 to 200 people. I think people get more of a window into it. Everybody has to do a little bit less.

When you're playing a venue that's 2,000 to 3,000 capacity, there's a hugeness to it. The sound increases fivefold. There's more booming. It's more of a show, like an athletic event or something. Big shows are very exciting, lots of energy, lots of adrenaline. There are more crazy, psychic-energy vibes swirling around the room.

I think that Alex and I will at some point — we call it the bell curve, when all bands go down at some point. We look forward to that time where we can play smaller shows again.

SD: Earlier this year you played the Just Like Heaven festival, which was composed of bands who hit their peaks in the mid- to late 2000s. Was it pitched to you that way?

VL: It was pitched as a festival in Long Beach. Usually when you're asked, you get a couple names of other bands playing the festival. It won't be every single person playing it. And I saw MGMT and a couple others and thought, Oh, that seems fun.

I didn't at the time think, Oh, this is gonna feel like a college reunion. I didn't actually think it would feel like a time capsule. A friend of mine in another one of the bands started making these jokes: Oh, we're getting nostalgic for the early 2000s already. I just thought, Oh, ha ha, that's funny. But when I got there, I was like, "Holy shit, there's the Rapture." I was still technically a teenager [when they formed]. I realized this was targeted to a certain demographic. It felt like some sort of strange reunion.

SD: When I think of Baltimore and pop culture, I think of two things: Beach House and John Waters. Are you a fan of his work?

VL: Of course! He's a whole other level. I don't think of us in the same sentence as him. He's amazing. He's a friend, and we're lucky to know him. And all of us are lucky to be alive at the same time as him. He's a force. He's one of the most open and hilarious people. He's an inspiration to me. That's how you live life.

SD: Do you ever think about making music on your own, or teaming up with other musicians for a side project?

VL: Never a solo career, I've never thought about that. I've never imagined that. But I did just start writing on my own and playing around. I've always preferred working with Alex. Collaboration is so fun and brings so much energy to your own work. Sharing really takes things to new levels. I've never had that [desire]. Maybe it's my personality. I just don't want to keep things to myself. It's a lot harder.

I have a lot of respect for solo artists because you're just stuck with yourself all the time. I think that can be both a blessing and a curse.

SD: Do you believe in multiverse theory: that there are infinite parallel realities? What do you think some of the other yous are doing in those alternate timelines?

VL: I think there's probably a mother version of me. I think there's a very wild, bad, dangerous version of me somewhere out there on the back of a motorcycle all in leather that's riding into the sunset. I'm sure there's an animal version of me, like a horse or a panda. I don't spend too much time thinking about it, but I am a playful person and am always open to playful conversation.