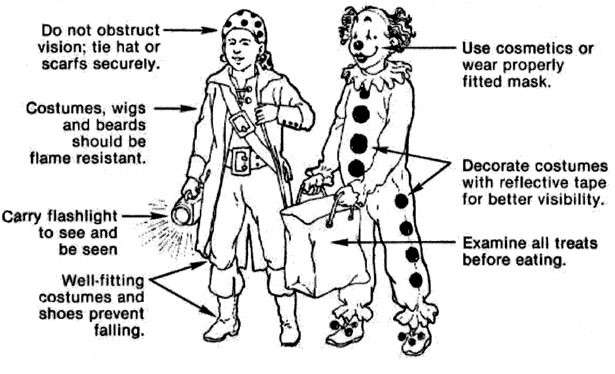 Phew. We made it through another Halloween with no American child bursting into flame.

For this we can thank the Consumer Product Safety Commission, whose Halloween Safety Alert admonished parents to dress children in flame-retardant costumes, emboss their bags and clothes with reflective tape, and make sure they were wearing sensible shoes: "Mother's high heels are not a good idea for safe walking." It also suggested keeping minors away from candle-lit jack-o'-lanterns.

At this writing, neither has any report surfaced of a trick-or-treater taking candy from a stranger and subsequently being sexually molested. Thank our government for that, too. Many states, including New Jersey, Texas, Illinois, New York and Virginia, prohibit paroled sex offenders from giving candy to children on Halloween. In New Jersey, such bogymen are not allowed to answer their doorbells on October 31. An article on one lawyer's website states that the legal restrictions, most of which date from 2005, "were passed as preventative measures, rather than a response to any Halloween incident by ex-sex offenders."

Halloween has always been scary. When I was a kid, scariness was the point. My pals and I crept out after dark, ran fast past the "haunted house" (which was probably just an old Victorian with a couple of gables in need of repair), and watched our backs for juvenile delinquents armed with eggs.

In those days - I shudder to consider the possibility - adults did not accompany trick-or-treating children.

Not that our parents didn't have fears. Fifty years ago, a sex panic was also alive in the land. Sensationalist headlines proliferated: "Kindergarten Girl Accosted by Man," "9 Charges Against Molester of Girls," "What Shall We Do About Sex Offenders?" Subsequent analyses found no actual increase in sex crime during the period, yet commissions were empaneled and laws passed; arrests increased. Most of the offenses, like most today, were minor, such as flashing and consensual homosexual sex. But a few highly publicized, grisly crimes drew cries for vigilante squads, life imprisonment, indefinite incarceration in mental institutions, castration and execution of the psycho killers.

All of these proposals and tactics have been reprised in the past two decades, only to a more extreme degree. For instance, half a dozen states have recently approved, as part of their "Jessica's Laws," the death penalty for repeat sex offenses against children. In Texas, capital crimes may include "indecency," such as groping a child outside his or her clothing.

As far as I know, however, criminalizing the distribution of Kit-Kat bars to a minor dressed as a skunk or SpongeBob SquarePants is an unprecedented measure.

During the weeks before Halloween, Ashland University chemistry professor Jeffrey Weidenhammer repeatedly alerted the consumer safety commission that his lab had found dangerously high levels of lead in four Halloween items. The worst offender, "ugly teeth," had 100 times the allowable level of lead in its paint - and this was meant to be worn in the mouth. A Halloween pail, a Frankenstein cup and a white, skull-shaped bucket also revealed unacceptable amounts of lead.

The CPSC issued a recall of the pails. Late on October 31, under enormous pressure from the press, it also called in 43,000 sets of the teeth. The agency offered no reason for leaving the other two items on the market.

Nancy Nord, the commission's acting chair, has indicated in the past that she'd rather rely on her in-house labs to decide which products are unsafe. There's only one problem with that approach: The CPSC has one full-time toy inspector. Only 15 staffers oversee all products imported into the U.S. - a $614 billion market.

And yet, when the Senate proposed to double her budget, to $141 million, and increase her staff by 20 percent (at 420, it's half the size it was in the 1980s), Nord wrote not one but two letters in forceful opposition.

Ironically, what she objects to most is Congress' attempt to grant her agency more power. The bill would raise maximum penalties to $100 million from $1.8 million, allow prosecution of executives whose companies willfully break the law, protect whistle-blowers, and let states enforce consumer protections.

Nord says she fears these measures would unduly burden companies. She also says that a ban on lead in toys, another of the bill's proposals, would be impractical. These are similar arguments to the ones made by the building industries in 1976, when lead was banned from residential use. That move has had a dramatic effect. From 1976 to 2002, the percentage of children with elevated blood lead levels dropped from 88.2 percent to 1.6 percent, according to the Centers for Disease Control and Prevention.

Indeed, all of Nord's arguments echo those of manufacturers and importers, as well as of the Bush administration, which has appointed industry insiders fiercely hostile to government oversight as chiefs of almost every regulatory body, from environmental protection to antitrust.

House Speaker Nancy Pelosi has called for Nord's resignation. Nord has refused to budge, and the president is behind her. "We believe she is doing a fine job," said White House spokesperson Dana Perino, "and we know she is committed to making sure that products that come into this country are safe for people." Perino noted that it can be impossible to deny someone a toy he or she really wants, anyway. Well, that settles it. The U.S. government wouldn't want little Sammy Walton to have a tantrum.

Not to worry, though. Child-protection legislation only shows signs of strengthening in the coming years.

Under the federal Adam Walsh Child Protection Act, beginning in 2010, wicked witches also will be subject to prohibitions on distributing candy and answering their doorbells on October 31. In addition, the CPSC will add an item to the "Choosing Safe Houses" section of its Halloween Alert, warning of the risks of children being enticed into gingerbread dwellings, pushed into ovens, and eaten.