BCO and Ray Vega Turn Up the Heat With Latin Jazz 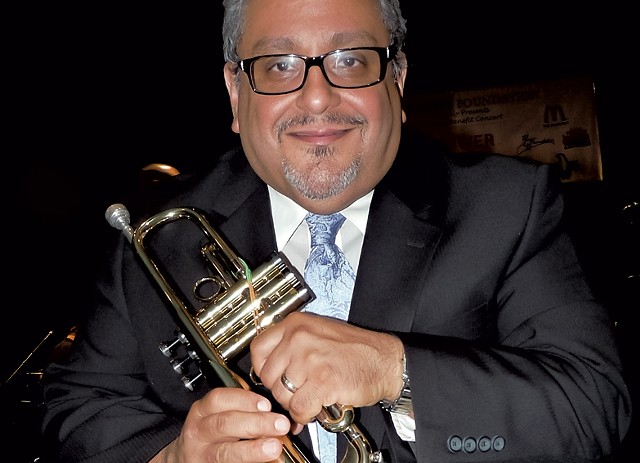 Jazz and classical music seem inimical. One calls for improvisation every time a piece is played; the other involves reverent adherence to the written score. Jazz audiences know to applaud solos while a tune is being played. Classical audiences frown on early clapping, often holding their applause until a violin's last reverberation has reached their ears.

But if you ask trumpet player and University of Vermont senior lecturer Ray Vega, there is no gulf between the genres. "I think the great divide is between the two ears of all the musicians who choose to believe that there is a great divide," says the South Burlington resident. (His native South Bronx, N.Y., accent has mellowed little since he and his family moved to Vermont in 2008.) "The real problem is when one thinks the other is of no validity."

Vega will validate both traditions in an unusual crossover concert when he joins the Burlington Chamber Orchestra this Saturday, March 25, at UVM's Recital Hall for "Latin Jazz Night."

The trumpeter can play the solos in George Frideric Handel's Messiah and jam with equal proficiency; he was in Tito Puente's trumpet section for the last seven years of the Latin-jazz great's life. Saturday's program, however, won't feature Johann Sebastian Bach, George Philipp Telemann or any other traditional chamber works for trumpet. And, notes Vega, "We're not playing a program of love songs from Latin America."

Instead, the BCO will open with arrangements for strings of works by Astor Piazzolla and Heitor Villa-Lobos, composers from Argentina and Brazil, respectively, who each found early inspiration in European classical music and training. A third piece, "Steel City Strut" by Danny Seidenberg, is a rhythm-and-blues-influenced work for strings that evokes George Gershwin's An American in Paris.

Vega himself wrote the rest of the program. The Ray Vega Quintet will perform three of the trumpeter's compositions — works the group would normally play in more casual Burlington venues such as the Hotel Vermont lobby and the Skinny Pancake.

Then the quintet and chamber orchestra will join up to play five pieces by Vega. Patricia Julien and Brian McCarthy, Vega's colleagues in the UVM music department, created the arrangements. Says Vega, "I instructed Patricia and Brian to take liberties and to deconstruct if necessary. The strings add some extra color flavoring."

Vega is adept at bridging the two worlds of classical and jazz. That's partly because his survival as a New York City musician required it. On a typical Saturday night, he would play a jazz gig in the evening, a salsa gig until 2 a.m. and a church service of classical music in the morning, he says.

Vega attended a specialized New York City high school now called Fiorello H. LaGuardia High School of Music & Art and Performing Arts, studying with teachers who played in the New York City Ballet Orchestra and the Chicago Symphony Orchestra. Later, he performed with the Los Angeles Philharmonic, the Atlanta Symphony Orchestra and others, and taught in the music department of Purchase College. Between those jobs, he traveled constantly with his city-based band, the New York Latin Jazz All Stars, with which he still performs. The UVM faculty position brought Vega to Vermont.

BCO artistic director Yutaka Kono, who is also a UVM music professor, says he couldn't resist inviting his colleague down the hall to collaborate on a concert. "The department of music and dance has some great faculty. They need to be highlighted more," Kono declares. A tuba player, Kono has performed with Vega at the Burlington Discover Jazz Festival.

While Kono and Vega aren't strangers to crossover, most of the 30-odd BCO players are. "The string players were concerned about whether they'd have to improvise. Classical players get really nervous about that," says Vega. "But I told Yutaka everything is written."

The program is accessible for audiences, too, Vega promises. And he plans to "get the room loaded up with a bunch of rowdy jazz fans" to help the audience adjust its applause techniques.

"I think it's important in these times to play music that makes people feel good," Vega declares. "I believe in beautiful sounds, beautiful melodies. Everyone should walk away feeling they have had a detour from the news."