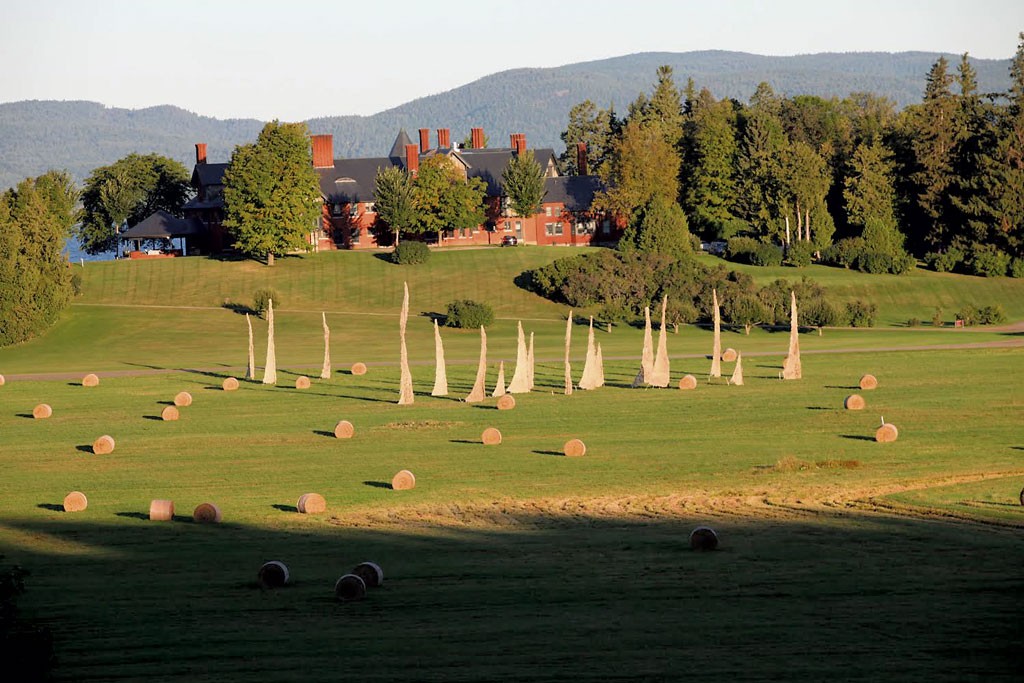 The inspiration for Burlington City Arts' sprawling, statewide art exhibit "Of Land & Local" arrived in the form of a tomato. In early summer 2013, BCA's chief curator, DJ Hellerman, was perusing the stalls of the weekend farmers market outside his organization's flagship gallery in City Hall Park. A gesture caught his eye: A farmer was waving a tomato, speaking intently to a curious customer about growing produce.

"We'd had an opening the night before," Hellerman recalls over coffee at August First Bakery & Café in Burlington. "And I thought, That's exactly like an artist talking about their paintings."

Hellerman had been mulling over a challenge for the past year, since he left his native Cleveland. When he arrived at BCA, he was tasked with developing an exhibit about Vermont's locavore food movement, an idea originally floated by former curator Chris Thompson. But until that day at the farmers market, Hellerman hadn't put his finger on what it was about food that made Vermonters so passionate.

Plus, he confesses, he hadn't come across much food-related art that engaged him. "I cared a lot about food, and I cared a lot about art, but for some reason I wasn't finding artwork that was able to deal with those interests in a successful way," Hellerman says. "So I kind of went on this journey of trying to figure out, OK, what is it about food that [Vermonters] are really interested in? What are my interests in food? And where do they come from?"

After witnessing that exchange, Hellerman left the farmers market with a new question: How are food producers and art makers alike? Some things were immediately apparent: Both farmers and artists work for little pay, generally in isolation, to bring a product to market. Then Hellerman realized that both art and food are deeply influenced by place and the natural world. That idea was the seed of "Of Land & Local," now midway through its second year.

It seems like a humble and happenstance beginning for what's grown into one of the state's largest and most ambitious art exhibitions. This year's show is a massive undertaking that involves more than 40 artists producing hundreds of works. Five separate gallery locations house them: BCA Center in Burlington, Shelburne Farms, Marsh-Billings-Rockefeller National Historical Park in Woodstock, the Carving Studio & Sculpture Center in West Rutland, and the Kent Museum in Calais. Each location has its own show dates and openings, ranging from early September to mid-November.

"It's a far-reaching survey exhibition that starts to get at a lot of the ways that the land influences art making, and [those ways don't] have to be visual," Hellerman says.

Translation: Don't expect a lot of pretty landscape paintings. Many of the artists involved worked on commission for the exhibit or as part of a residency, while others submitted existing work. Their ways of tapping into the "Of Land & Local" theme are as varied as the terrain itself. What links the art — and the artists — in Hellerman's mind is a palpable response to Vermont's landscape and issues surrounding the land. "I look for whether the ideas are challenging, for work that has good quality and has good content," the curator says.

For instance, one of the show's more direct narratives comes from artist Kate Katomski, whose family has roots in Rutland's marble industry and who created a series of multimedia works while in residence at the Carving Studio & Sculpture Center. She used marble dust, maps, and her own sketches and photography to capture aspects of those quarries; the results are displayed at the Coach Barn at Shelburne Farms. A few of the other diverse works at that site include an installation of leaves and ceramic objects by Leslie Fry, color-saturated abstract photography by Douglas Biklen and a life-size metal elephant sculpture by Eben Markowski located just outside the entrance to the barn. Downtown, the BCA Center offers various works, such as as recycled bike-tire sculptures by Olivia Kaufman-Rovira and political prints by 83-year-old Northeast Kingdom book artist Claire Van Vliet.

Though most of the 40-plus artists in this year's show consider themselves Vermonters, some out-of-staters created new work in response to Vermont. Chicago-based artist Judy Natal, for instance, completed a series of fine-art portraits during a monthlong residency at Shelburne Farms. She photographed staff members partially submerged in Lake Champlain and holding animals and lake debris found on the estate.

The departure from the show's original concept doesn't surprise BCA executive director Doreen Kraft, who hired Hellerman in 2012. (BCA is both a department of the City of Burlington and a nonprofit entity.) "Putting the frame just around food just felt too narrow to [Hellerman], I think, and he moved that frame in such a way that we [at BCA] all moved with him," Kraft says. "It was this evolution of his thinking, this response to land and Where's genesis? And Where's the creation of culture? Where does creativity come from? We all got involved in this conversation with him.

"His practice," Kraft adds, "is very much seeing things from a global perspective, then bringing it down to a local level."

For Hellerman, creating a show about land issues gets to the heart of what makes people care about food in the first place. "Food is manifested from the land, and land is what we fight about," he says. "When people get passionate about wind turbines, it's really being passionate about the land and the aesthetics of the landscape. I like that we fight about that. I like that Vermont fights about billboards. I like that people are interested in aesthetics when it comes to land and landscape."

Visual art, of course, is only one prism through which to view land issues. So, this year, the exhibit has expanded beyond gallery walls to include an array of multidisciplinary events and talks. They include farm-to-table dinners at Shelburne Farms, tours of David Stromeyer's Cold Hollow Sculpture Park in Enosburg Falls and a Forest Festival Weekend at Marsh-Billings-Rockefeller. The show's website features a full event schedule and is updated frequently; Hellerman calls it a "live catalog."

"'Of Land & Local' started as a concept, became an exhibition and it's now something that we're calling a 'project,' because it just keeps going," Hellerman says. The multidisciplinary approach surfaced early in the planning stages, he adds, but couldn't be realized in 2013, when the show was planned in six months and included 60 artists in seven locations. "The first year was really about getting our feet wet, laying the groundwork you need to connect to a statewide community," Hellerman says. This year, a smaller roster of artists has made possible the addition of more commissions and artist residencies.

Why is a Burlington-based contemporary arts organization spearheading a cluster of happenings on land issues? While Hellerman's vision played a role, so did early partnerships with Shelburne Farms and the Vermont Department of Tourism & Marketing. The former has a mission of sustainable agriculture and community education; the latter encouraged "Of Land & Local" to develop a statewide reach.

"This is a story we love to tell," says Megan Smith, the state commissioner of tourism and marketing. "When we signed on, [the project] was just an empty piece of paper. So we just started thinking about places where we could put artists and exhibits. We travel around the state all the time."

"We wanted to move people around the state," agrees Hellerman. "The whole exhibition is modeled on agrotourism. Why can't we have a cultural tourism in this state? Our goal this year was to set up a couple of locations, reduce the number of artists, increase some events that would push and encourage people to move around" — such as the tours and talks. Some of the art installations, such as Markowski's life-size elephant or Nancy Winship Milliken's ethereal installation of 11-to-40-foot-tall sail sculptures (made from the wool of Shelburne Farms sheep), are probably photo-worthy enough to draw tourists in their own right.

Though "local" is the exhibit's focus, the organizers are also keeping an eye outside state lines. BCA intends to invite more artists like Natal in for residencies, and Smith hopes that "Of Land & Local" will appeal to national and international visitors. "We're already starting to build the reputation of the exhibition outside of Vermont," Hellerman says.

He adds that the third year of "Of Land & Local," which is already in the works, will feature fewer artists but a greater number of residencies, with the aim of encouraging "more work in Vermont, in response to Vermont."

Disclosure: Seven Days is one of the media sponsors of "Of Land & Local."