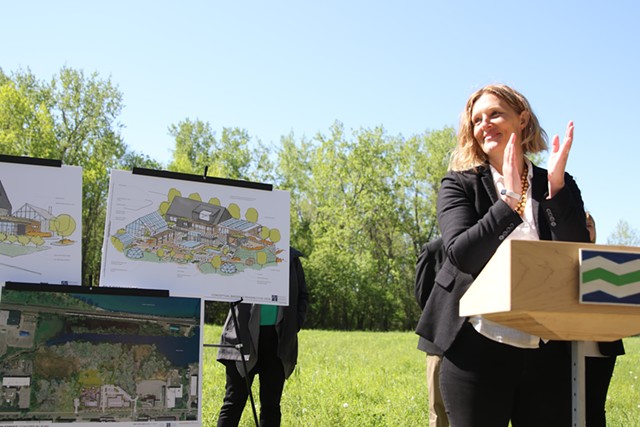 Vermont will spend $6 million cleaning up a contaminated property along Burlington’s Pine Street so that the vacant land can be redeveloped into a Nordic bathhouse and a bowling alley.

The money to rehab 453 Pine Street will come from a fund meant to help businesses and municipalities clean up brownfields, a type of contaminated land regulated by the state.

The property, located south of the Maltex Building, sits near the old Barge Canal, where workers from a long-gone coal gasification plant used to dump coal tar, cyanide and other contaminated residue. Previous redevelopment efforts there have failed over the years, largely because of the massive remediation costs.


“That’s usually the case with brownfields,” Gov. Phil Scott said Wednesday at the contaminated site during a press conference to announce the new funding. “They’re some of the biggest, most complex legal, financial and environmental projects in Vermont. But when cleaned up, they can have huge economic and environmental benefits.”

The redevelopment project is expected to break ground next spring. Two local entrepreneurs are involved: Jovial King, the founder and former owner of Urban Moonshine, a line of herbal tonics and digestive bitters, and Alex Crothers, the founder and co-owner of Higher Ground.

Each will own and operate one of the new businesses: King, the Silt Botanica Bathhouse, and Crothers, Backside Bowl, which will include both traditional bowling and duck pin. They expect to employ about 65 people and say they are committed to maintaining some of the property as open space.

“This joint project will create fun, joyful, welcoming spaces where you can shed the worry and wear of everyday life and take time to renew,” King said.

The property's owner, Rick Davis, has been trying to sell 453 Pine and an adjacent polluted lot, 501 Pine, for several years. Combined, they make up about eight acres, with an asking price of $2.5 million.


Davis told Seven Days on Tuesday that King was looking to buy both properties from him. Some details still have to be worked out, he said, including price, “but it looks very good.”

Contaminated Burlington Land Near the Barge Canal Hits the Market for $2 Million
By Courtney Lamdin
Development
A sale would come as a big relief to Davis, who has owned the vacant lots for almost four decades. He told attendees at Wednesday’s press conference that he attended a similar event three decades ago, at which former governor Howard Dean first declared 453 Pine Street a brownfield.

“There have been many attempts — very good, professional attempts — over the last 30 years to develop this site,” Davis said. “There comes a time where [the] strategic deployment of state funds can reap a very high rate of return, and this is one of those cases.” 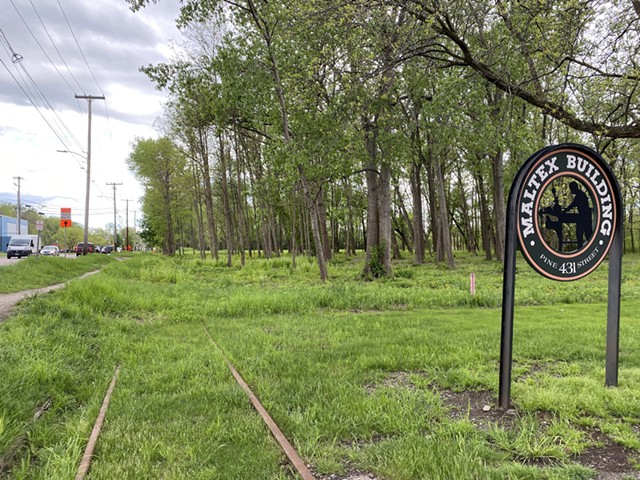 The businesses would be located along a Queen City corridor that some say is ripe for more housing.


Making the brownfield safe for housing would have almost certainly been more expensive, since it usually requires a more rigorous clean-up effort. The city's zoning laws also currently permit only light manufacturing and industrial uses in the area. Burlington entrepreneur Russ Scully has been urging the city to add residential uses to the list, citing the housing crisis. But the planning commission has not yet voted on the idea.


The project also falls within one of 25 "opportunity zones” sprinkled across Vermont. The designation, established by Congress at the urging of former president Donald Trump, was purportedly meant to stimulate growth in poor neighborhoods by offering federal tax breaks to those who invest in certified zones. But it has mostly just helped rich Americans finance developments meant to serve other rich people.

Will the bathhouse and bowling alley owners cash in?

“Not right now,” Crothers said. “We know it's an opportunity zone — that’s been flagged for us — but it’s not part of the financial model that we're using.”

The project wouldn’t be possible without the brownfield clean-up funding, though, he said.

Other brownfield projects are on the horizon. Lawmakers allocated a combined $31 million this biennium for clean-up projects. And the Environmental Protection Agency announced this week that it was sending Vermont almost $5 million more for the cause.

“This money will help create jobs, housing, new businesses and other opportunities on sites that were proved previously unusable,” Scott said. “This is a big deal for cities like Burlington in areas of the state who are in desperate need.”