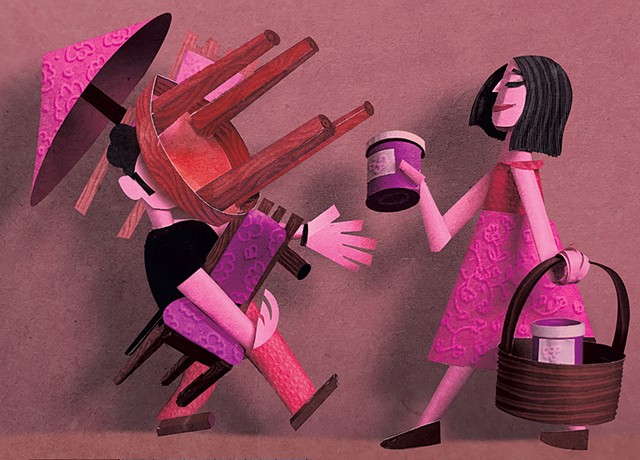 Kaitlin Nelson wanted to throw a housewarming barbecue at her new home in Belvidere. The thing was, she had no outdoor furniture and little surplus cash. Nelson had recently started a new job with a long commute, and the rising cost of gas was straining her wallet. Plus, she was helping to raise two young stepdaughters.

So she decided to barter.

Nelson made an offer on Front Porch Forum: homemade jam or eggs from her hens in exchange for used outdoor furniture. She was floored by the number of people who responded. Five jars of jam later, Nelson had scored two glass-top tables with matching seats and a pair of picnic tables. No money changed hands.

This wasn't Nelson's first barter. She and her husband have gotten in the habit of making extra jam specifically for trading. "It's just like having a little bit of extra currency," she said. Sometimes, Nelson trades eggs for blueberries from her friend's bush, which she then turns into jam and trades for other goods and services. A double trade, if you will.

Nelson has cleaned barns in exchange for fencing for her goats and swapped maple syrup to get a bike for her stepdaughter. She usually uses Front Porch Forum, the popular neighbor-to-neighbor platform, to offer exchanges but also has developed regular trading relationships with some of her neighbors. A few years into regular bartering, Nelson reports that "money suddenly doesn't seem so valuable."

Bartering has not only allowed Nelson to save money but has built relationships with neighbors she previously only knew in passing. And the practice has proven especially helpful at a time when the price of goods is rising. "My husband and I have always joked that if the economy ever failed, Vermont would thrive," she said.

The age-old custom of bartering may be finding new life in Vermont, though the picture is still incomplete. Anecdotal evidence suggests that inflation is breathing fresh energy into the practice, especially among younger residents. For money-strapped Vermonters — in rural and urban areas alike — advocates say trading goods and services offers a way to help make ends meet, while strengthening community ties in the process.

"If you're just on the edge, it might keep you on the good edge instead of falling off the cliff." Jane Kolodinsky tweet this

Bartering can help individuals and rural communities build resiliency outside the money economy during trying times, said Jane Kolodinsky, director of the Center for Rural Studies at the University of Vermont. Kolodinsky, who studies the ways rural communities adjust to adversity, said bartering is a potent tool: "If you're just on the edge, it might keep you on the good edge instead of falling off the cliff." In addition, bartering is by nature a highly local practice and can promote networks of trust, she said.

Some bartering looks less like trading and more like a kind of giving. Elizabeth Echeverria, owner of Hawthorn Meadow Farmstead in Craftsbury, said she gives surplus veggies to her neighbors without a specific expectation of anything in return. "When this can naturally work and balance, it's far nicer than a formal bartering system," Echeverria said. "The approach is less self-centered and is simply fueled by moments of abundance."

In fact, farming and bartering often make a natural fit. By trading surplus crops or livestock, farmers are better able to weather unpredictable seasons and slim financial margins. Farmers market sales can be hit or miss, and unsold vegetables can go to waste. For that reason, after-hours bartering at the Capital City Farmers Market is a common practice among sellers. Kevin Foy, owner of Black Locust Farm in Randolph Center, said trading the meat he raises with other sellers is how he gets most of his food.

At the beginning of the market day, Foy scopes out produce he wants and makes offers to trade. At the end of the market, he takes unsold produce off his friends' hands. He said that from a philosophical standpoint, bartering feels right. "It's much better than it going in the compost," Foy said, "and we can get some veggies from it, too."

Kayleigh Boyle of Breadseed Farm in Craftsbury said after-market bartering has allowed her to bypass grocery store shopping entirely and avoid the dramatic increase in the cost of food in recent months. Boyle trades the vegetables she grows for food she doesn't produce, such as meat and milk.

"With grocery prices, [bartering] is something my partner, Doug, and I have definitely talked about," Boyle said. "We've been trying to stretch our milk until we can trade the next week, versus going to buy retail."

Some bartering systems, such as the Onion River Exchange, are much more formal. The Montpelier-based swap is a so-called time bank, meaning that members exchange skills and talents, paying with time instead of money. Community members can log time spent on a task for someone else — such as gardening, knitting or even accounting — in exchange for an equal amount of time spent on a task of their choice.

Time-banking is what initially drew Evan Chartier, a resident of Wolcott, to bartering, which is how he now meets most of his basic needs. He hasn't paid rent for three years and instead trades for places to live.

Chartier turned to bartering several years ago while he was living in Boston and found himself in need of a stud finder. Although Chartier had lived in the city for four years, he realized he didn't know a single neighbor whom he could ask for the tool. That motivated him to join a Boston time bank similar to the Onion River Exchange. "All of a sudden, I knew my neighbors," Chartier recalled. "It felt really good."

Since moving to Vermont, Chartier has undertaken bartering projects of increasing scale. He's remodeled part of a home in exchange for staying in a trailer on the property and swapped odd carpentry jobs for fresh produce. One of his favorite trades was with a neighbor renovating her childhood home. Chartier planted a couple of blueberry bushes in exchange for unwanted tools she had found in the home. To the neighbor, the leftovers were junk. For Chartier, who enjoys restoring old tools, they were a major score. That's one reason Chartier loves bartering: It allows personal, rather than monetary, value to guide trading.

Foy, the meat farmer, has noticed that other sellers most often try to give him more than he's asking for, rather than haggle for their goods. They appreciate that he's helping them get value for produce that would otherwise go bad, he said.

This same bartering spirit is spreading into larger communities that have had a less robust trading tradition. Holly Danger created the Facebook page Burlington Barter in 2020. The group has grown to 1,100 members and is meant to be a place where people can meet their needs without money, while helping foster community connections. "It empowers people to ask for what they need," Danger said. "They can ask for something of value and not feel like they're asking for charity."

The Burlington group's posts have a more modern, urban feel than those in rural Vermont. One member was searching recently for someone to create social media content for her skin care studio. She offered skin care products in exchange for some posts. Another person had a new AC unit up for grabs. In exchange, he wanted either mechanic work on his car, a yard umbrella, some crystals or haircuts on an ongoing basis.

Danger said users in the Facebook group largely have been fair and courteous — the biggest issue has been spam, not unfair trades. She has noticed a modest uptick in members since inflation began driving up the cost of goods.

Members of the Burlington group represent a wide range of ages, from college students to the elderly. Bartering fans say the practice turns out to be an effective way to bridge age gaps. Chartier said he often barters with older neighbors who can't do certain manual tasks but have knowledge or skills that are of value to him.

Nelson, the jam maker, knows the feeling. An older friend of hers has an old-fashioned cider press but can no longer bend over to pick up apples from the ground. So Nelson and her husband spend a day every fall collecting apples for their friend, who then runs them through his press. Nelson ends up with 15 gallons of free apple cider and a deeper sense of kinship with her friend.

The bartering phenomenon has given rise to similar tales. Danger knows of a handful of unlikely friendships that were sparked through the Burlington Barter page. Boyle, of Breadseed Farm, befriended a neighbor by swapping cucumbers for mason jars. And Chartier grew so close to an older community member with whom he regularly traded that he was heartbroken when the friend died of cancer.

Kolodinsky predicts that continuing price inflation will spur more bartering. While trading goods and services can be a creative strategy for getting by in a tricky moment, Kolodinsky says a less obvious by-product of the boost in bartering may lie elsewhere: an opportunity to "actually build back more community."

The original print version of this article was headlined "Trade Wins"