Bartender Kate Wise Gets People to Drink It Forward 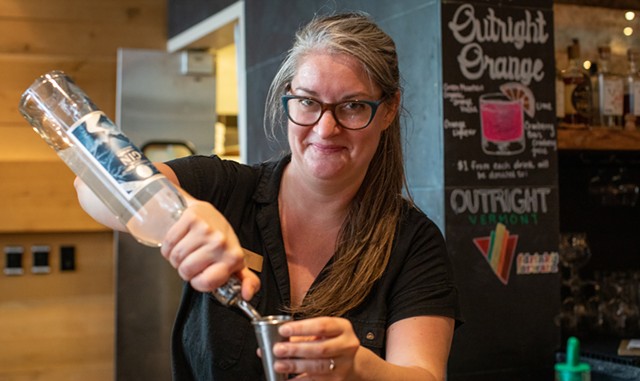 Kate Wise thinks that the cosmopolitan is a great drink. Sure, the cocktail has some work to do to overcome its 1990s-syrupy-sweet-girly-pink reputation. But if she has anything to say about it, we'll all be drinking them regularly even before the "Sex and the City" reboot launches this fall.

"You see them in movies, and they're the wrong color or the wrong everything," said Wise, a bartender at Hotel Vermont's Juniper Bar & Restaurant in Burlington. "But a really good cosmo is one of the most delicious things ever."

On top of being delicious, Wise's current riff on the cosmo at Juniper is raising money for a good cause. The Outright Orange — a mixture of Green Mountain Distillers' organic orange vodka, Vermont Cranberry juice, orange liqueur and lime — is part of the #drinkitforward campaign, a statewide effort that Wise spearheaded to raise money for Outright Vermont.

Throughout September, which is Vermont Pride Month, $1 from each #drinkitforward beverage goes directly to the nonprofit that supports LGBTQ+ youth. Thanks to Wise's enthusiasm and outreach, more than 50 businesses are participating with fundraising drinks of their own.

Wise, 37, hates talking about herself. Behind the bar, she's quick to dive into esoteric cocktail history, explaining the nuances of what makes rye rye or correcting the misconception that bourbon must be made in Kentucky. Sitting down for an interview on Juniper's patio, though, made her "a little clammy," she said.

"It's for a good cause. Why the hell would you say no?" Kate Wise tweet this

The Stowe native was bartending before she was old enough to drink. At age 19, she worked her way behind the bar at the Rusty Nail, where she'd started pouring creemees when she was 13. Since then, she's worked at industry heavy hitters Pro Pig, Doc Ponds and the Great Northern, as well as the now-closed Beau in Montpelier.

"I was working in a fast-paced nightclub until I was 27," Wise said. "I could make Surfers on Acid, but no one was really asking for a negroni." When she left the Rusty Nail for Pro Pig, "Jeff Baumann made my brain explode with all the stuff I didn't know yet," she added, referring to the then-head bartender at the Waterbury spot.

Wise credits Baumann, now the general manager at the Great Northern, with creating a demand for a real cocktail culture in the area. "Thankfully, I no longer need to make lots of shots that come with lots of flavored rums and schnapps," she said.

Now Wise has her own cocktail training and education business, Wise Consulting. Last winter, she ran Zoom seminars — whiskey and tequila tastings — for companies around the country.

"It was very, very nerve-racking," she said with a laugh, reiterating that she's uncomfortable being the center of attention. "But then I realized that I'm just drinking booze the whole time and talking about stuff that I love to talk about."

Wise has worked at Juniper for the past three years — the longest she's worked anywhere since the Rusty Nail, and the most "adult" bartending job she's ever had, she said. The hotel bar is known for its Vermont beer list, natural wines and local, seasonal takes on classic cocktails: a Bee's Knees with Barr Hill Gin; old-fashioneds with WhistlePig Rye Whiskey; and 44 Rhubies, a daiquiri variation with Wise's homemade rhubarb syrup and Mad River Distillers' Rum 44.

Her goal, whether chatting by videoconference or one-on-one across Juniper's copper bar, is to create a more educated consumer. For instance, she said, she'll "let them know that it's not 'ippah,' it's I-P-A, in the most approachable way possible, without making them feel silly."

"I try never to start a sentence with 'Actually...'" Wise said with a laugh. "But there are so many people that are just openly wrong and very vocal about it at the bar; I feel it's my duty, out of respect for other bartenders, to just let them know."

Teaching someone how to bartend — the intangible skills of multitasking and interacting with customers — requires a different approach. 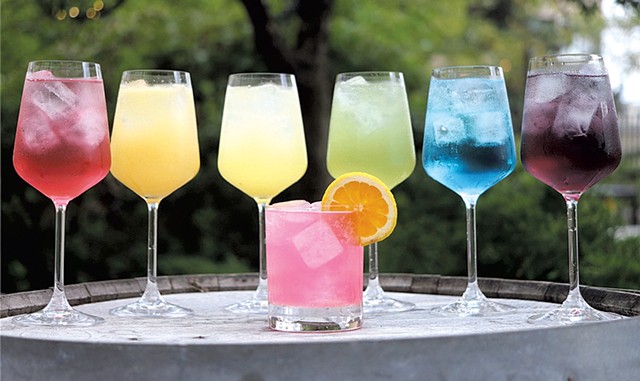 On a busy Wednesday night, when all of Juniper's eight or nine low-backed stools were full, Wise's own skills were in full evidence. She quickly and unpretentiously rattled off the definition of orange wine, chimed in on a reporter's rant about hard seltzer, and took a food order, punctuating her simultaneous conversations with a consistent rhythm from the cocktail shakers she wielded in each hand.

"It's a really specific personality that makes someone crazy enough to keep coming back to do this job," Wise said. The hours and money are nice, she conceded, but it's the people in the industry who have kept her there. "It's the most lovable group of nerds. And people are unabashedly themselves."

Many of those "nerds" were quick to jump on board Wise's #drinkitforward campaign when she pitched it in August. The idea originated with a small fundraising effort in May and early June, when Juniper donated $1 for every 44 Rhubies cocktail sold to Ferene Paris Meyer's All Heart Inspirations Juneteenth Celebration.

Wise wanted to keep the program going, and the hotel supported her. In July and August, sales of the Whi(noo)skey Strong Sour benefited anti-racism initiative Winooski Strong.

Wise hammered out her idea with Paris Meyer and CD Mattison, cochair of Outright Vermont's board. Mattison's suggestion to support Outright Vermont aligned with Wise's larger plan: to fundraise for six BIPOC- and LGBTQ-centered nonprofits over the year.

The goal is to "get some real money and feature communities that need some spotlight and money and support, especially now," Wise said.

Things snowballed from there. Since the fundraiser is so simple — a dollar a drink — Wise thought other bars, restaurants and coffee shops might be interested in joining. "It's for a good cause," she said. "Why the hell would you say no?"

She wrote a letter explaining #drinkitforward and headed out to other businesses. More than 50 signed on: the Farmhouse Group, ArtsRiot, Café Mamajuana, the Great Northern and Zero Gravity Craft Brewery, both locations of Hen of the Wood, other businesses in Stowe and Waterbury, Montpelier spots such as the new Fox Market and Bar, and even Wolf Tree in White River Junction.

"I've cried many times," Wise said of her colleagues' overwhelming support for the fundraiser. When Bob Montgomery emailed from Hill Farmstead Brewery to say the business would donate a dollar for every draft pour in its Greensboro tasting room, "I definitely lost it. But they were happy tears."

People have started doing #drinkitforward bar crawls, Wise said. She doesn't have time for much crawling of her own, but she keeps tabs on the hashtag on social media, which she also uses to give away gift cards to participating businesses.

The campaign isn't just about booze. The Waterbury and Stowe locations of PK Coffee are participating with Love Beets All, a bright-red beetroot latte. Stowe Street Café in Waterbury is donating $1 from each of its fresh-pressed juices. Brio Coffeeworks in Burlington has an alcohol-free, espresso-forward take on a dark and stormy.

"It doesn't need to be a new drink," Wise said, noting that the #drinkitforward special at Winooski's Waterworks Food + Drink is a classic Bee's Knees. At T. Ruggs Tavern in Burlington, it's a Lost Nation Brewing Lokal Resident.

"It essentially costs the bar nothing — you figure out what your normal cost is and tack on a dollar," Wise said. "That's the beauty of it. And when enough people just concentrate on one cause, you can actually make some real change."

The Outright Orange, Juniper's orangey cosmo riff, is an approachable crowd-pleaser. Its pretty looks encourage patrons to ask about it.

Besides telling her customers about cocktail history, now Wise is talking about Outright Vermont — and so are bartenders, servers, baristas and restaurant owners around the state. Wise will know the total amount raised by October 15; her initial goal was $5,000, but she thinks it might hit five figures.

"Our industry has a unique ability to reach the general public," Wise said. "We need to use our platform intentionally to increase awareness, get people out of their comfort zones, start a conversation and raise some damn money."

The original print version of this article was headlined "Wise Idea"