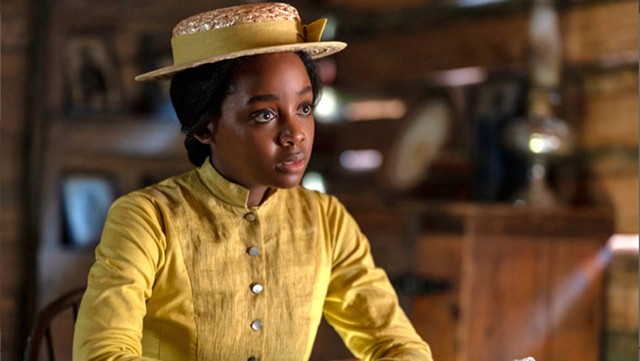 Our streaming entertainment options are overwhelming — and not always easy to sort through. This week, I watched "The Underground Railroad," a 10-episode adaptation of Colson Whitehead's Pulitzer Prize-winning novel of the same name. Set in the antebellum South, it's an alternative history with the premise that the Underground Railroad that helped bring enslaved people to freedom was a literal underground railroad. Oscar winner Barry Jenkins (Moonlight, If Beale Street Could Talk) cowrote and directed.

Enslaved on the Randall plantation in Georgia, Cora (Thuso Mbedu) was abandoned young by her mother, who fled toward freedom. When the charismatic Caesar (Aaron Pierre) asks her to escape with him, she refuses at first, but a terrible series of events changes her mind.

Soon Cora finds herself traveling from state to state on the Underground Railroad, experiencing a fractured version of American history. South Carolina promises her an idyllic life among benevolent white people, but the truth is much darker. North Carolina has abolished slavery — in favor of genocide. In Indiana, at last, Cora discovers a communal farm where Black people are prospering and determining their own destiny.

But wherever she goes, the tireless slave catcher Ridgeway (Joel Edgerton) and his loyal child sidekick, Homer (Chase Dillon), are hot on her heels.

First of all, I recommend reading what Black critics have to say about "The Underground Railroad." The powerful analyses of Angelica Jade Bastién on Vulture, Robert Daniels on Polygon and Blair McClendon on 4Columns are great places to start.

People often describe works like "The Underground Railroad" as being "hard to watch" before adding that their content is still "important" and "necessary" to absorb. That's true as far as it goes. The depiction of slavery in the first episode is indeed horrific, as it should be. And, though Cora's situation improves once she escapes, the ensuing episodes still feature trauma, heartbreak and apocalyptic hellscapes (one especially bleak stretch of her journey could be taking place on the set of The Road).

But to focus only on what's difficult about Jenkins' series, to treat it like a bitter pill to be swallowed, is to ignore what a great and inspiring work of art it is — boldly imagined, superlatively acted and frequently just plain beautiful. Shot by Jenkins' longtime collaborator James Laxton, "The Underground Railroad" is cinematic in an epic style, with sweeping, flowing camera movements and intimate close-ups and golden sunlight you can feel on your skin. The liminal darkness of subterranean railroad tunnels and the ashy rubble of ruined landscapes yield periodically to pastoral interludes, which Nicholas Britell's score infuses with an aching romanticism. The ninth episode in particular is a brilliant microcosm of the series' contrasts, taking viewers on a heartrending visual and emotional journey in the space of 77 minutes.

Mbedu's Cora is slight and childlike in appearance but no generic ingenue. From her first line — "The first and last thing my mama gave me was apologies" — she burns with rage at a life defined by loss. Hope comes hard to her, but when it does come, she glows.

The Javert-like Ridgeway lectures Cora on her anger, but in an episode exploring his own background, we learn that his brutal choice of trade is rooted in his own rage. (The flashbacks do nothing to exonerate him.) Other characters make brief but indelible impressions, from Sheila Atim as Cora's midwife mother to Chukwudi Iwuji as a proud Black entrepreneur to Dillon as the merciless, unchildlike child Homer, who might haunt the viewer's dreams.

Jenkins follows Whitehead's lead in mixing history with the surreal to create a narrative that does more than feed information into our brains; it forces us to think about how we process and act (or don't act) on what we already know about American history. From time to time, the filmmaker presents the people in Cora's past in posed tableaux staring into the camera, like the figures in old photographs. Their stillness suggests they are objects of memory. But their gazes are fierce and alive, as if they're about to give testimony — something that is required of every passenger on this Underground Railroad. We ignore that testimony at our peril.

Small Axe (2020; Amazon Prime Video): Director Steve McQueen (12 Years a Slave) made this acclaimed series of stand-alone films to chronicle the lives of West Indian immigrants in London from the 1960s to the 1980s. The installments vary greatly in length, subject and tone, but for a pure shot of joy, watch Lovers Rock, set at a dance party.

13th (2016; Netflix): Ava DuVernay's documentary explores the legacy of slavery in the U.S., persuasively arguing that it didn't end with the passage of the 13th Amendment to the U.S. Constitution.

Monday saw the centennial of the Tulsa Race Massacre, in which white residents systematically razed Tulsa's thriving Greenwood District, or "Black Wall Street." ("The Underground Railroad" depicts similar atrocities occurring on a smaller scale.) Three new documentaries chronicle the massacre, which was far from the only one of its kind: Tulsa Burning: The 1921 Race Massacre (History Channel), Dreamland: The Burning of Black Wall Street (HBO Max), and Tulsa: The Fire and the Forgotten (PBS).