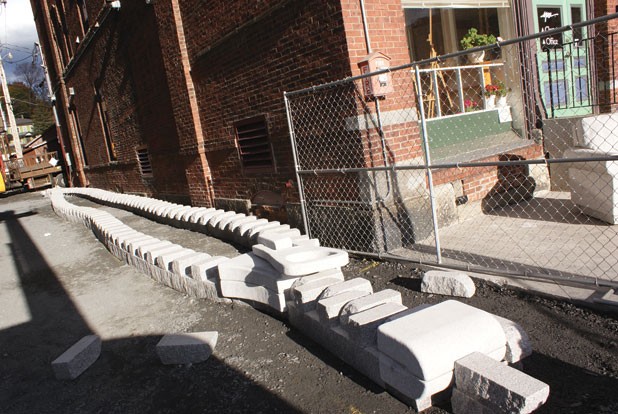 When Studio Place Arts commissioned sculptor Chris Miller to create Barre’s newest public artwork, he was faced with a unique challenge: Craft an engaging structure — from Barre gray granite, of course — to fill the long but narrow space between the downtown gallery and the new Barre City Place building on Main Street.

Miller was up for the challenge. The Calais stone carver worked with the constraints of the site to winnow down his options. The space is just 5 feet and 8 inches wide, but 74 feet long. His task was to define the space with granite yet leave room for plantings. SPA and DEW Construction, the firm that owns Barre City Place, wanted the sculpture to be the centerpiece of a new pocket green space.

At first, Miller considered carving train tracks with a train at one end, but the design would have been too bulky. Next, he says, he thought about building a stone wall, but that option seemed too linear.

“When I kept sketching out the design as a stone wall, it kept looking more and more like a zipper,” says Miller.

Which is exactly what it became: a 74-foot-long, undulating granite zipper. The sculpture evokes the sense of “the Earth opening up,” Miller says, a perfect thematic fit for a garden.

The recently finished sculpture is called “Unzipping the Earth.” Complete with all the zipper parts, it’s the kind of piece that makes you want to reach out and touch it — or zip it up.

Miller started carving the zipper five weeks ago. Since the work has been finished, SPA executive director Sue Higby has planted perennials in the long opening between sets of granite teeth.

The pocket park, which doubles as a main entrance to Barre City Place, takes the place of the temporary sculpture park SPA created on the vacant lot before construction began on the new building.

“We realized that we needed to make another special place,” says Higby. “The zipper sculpture garden will catch the attention of people, in part because of the curiosity factor and for its original beauty — imagine what fun they will have visiting what is likely North America’s largest zipper.”

This isn’t the first stone sculpture Miller has carved for downtown Barre. Last summer he completed an unusual bike rack — over which a pair of granite gargoyles fought tug-of-war style — as part of the Semprebon Stone Sculpture Legacy Program.

With its deep stores of granite, its rich history of Italian stone cutters and its current crop of talented local carvers, Barre is reclaiming its role as a serious Vermont art hub. And Miller is thrilled to be a part of the city’s expanding public art landscape. “I’m among those that believe Barre should have a sculpture every 10 feet,” he says.