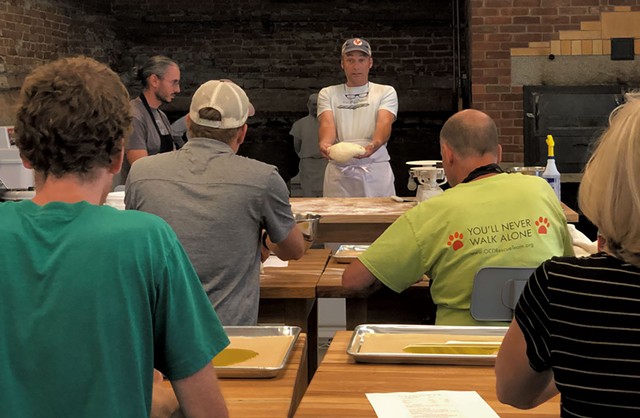 History is getting closer to repeating itself as Barre's historic Rise Up Bakery moves into the final stages of its restoration project.

Nearly four years of fundraising and construction have gone into bringing the bakery, built in 1913 by granite workers and closed since 1943, back to its original use. "The building was a brick shell," said project director Carolyn Shapiro.

Owned by the Barre Historical Society, the bakery has raised more than $300,000 under Shapiro's guidance, through a successful Kickstarter campaign and funding from local and national grants. That money has been used to completely renovate the space, bringing it up to code and building a new wood-fired oven. A shell no more, the bakery hosted its first public workshop this past weekend, led by Randy George of Red Hen Baking.

Destined to be both a commercial bakery and a teaching center, Rise Up Bakery has hired baker Jim Haas to helm the hearth. Haas, 56, is returning to his native Vermont after 28 years living in Ukraine, where he and his wife started the country's first wood-fired bakery in 2006.

In a bit of serendipity, Haas found the job posting thanks to George. "I saw 'Vermont' on a message from Randy on the Bread Bakers Guild of America list, and thank goodness I opened it," said Haas. "When you're a baker, you don't have a lot of time for emails."

Haas will arrive later this summer in Barre, where he will set to work writing a business plan for the bakery's commercial arm. He plans to focus on the sourdoughs and ryes he developed while in Eastern Europe, as well as on breads that appeal to the local market. "I'm itching to get back to my roots and fire up that oven," Haas said. "The work that Carolyn and the community did to breathe life into that building is awesome."

In the meantime, the bakery will host a demonstration on August 11 with Jules and Helen Rabin, who baked breads coveted by central Vermonters for four decades under the name Upland Bakers. Shapiro sees these workshops as a way to involve the community in the space. "We're in it for the history and the experience," she said. You can register for the workshop at oldlaborhall.org.

The original print version of this article was headlined "Fired Up"