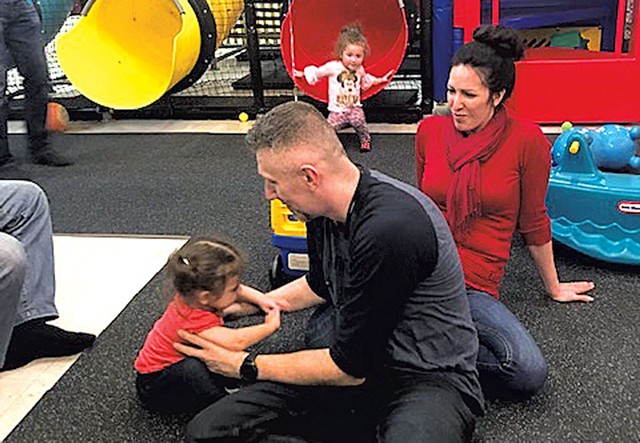 In December 2018, Jackie Scribner of Cabot realized a dream she'd had for years. The grandmother of two opened Romp, a 3,000-square-foot indoor play space in Barre. It catered to families with children ages 10 and under, and offered multiple ways for young kids to burn energy — jumping in a bounce house, tumbling on mats and riding pedal go-carts around a circular track. The centerpiece of the facility was a large indoor play structure with a climbing tower, slides and a web tunnel. Scribner built it herself. She bought it used, and it didn't come with blueprints, so she spent three months figuring out how all the pieces fit together.

Scribner previously owned Hestia Espresso Bar in Plainfield and loved the communal environment that she had created there. She replicated the coffeehouse feel at Romp with a café where parents could sip lattes and chat while their kids played.

"Barre doesn't offer much in the way of good, safe indoor activities for kiddos, especially for the cold months," explained Colleen Hurley of Barre City, who visited the space regularly with her three sons, ages 7, 6 and 18 months. Romp gave her kids a place to run, play and climb, she said, and she liked connecting with other parents there.

Now, just a little over a year since Romp opened, Scribner has decided to close it for good. In the first year of operation Scribner didn't pay herself, and she used income from day passes and birthday parties to pay her bills and purchase more equipment. This winter, she was looking forward to being more established and hoped to start taking a salary. Then came COVID-19.

"I was paying attention to the news," said Scribner, "and I was having a feeling that it was going to be really bad for business."

Romp hosted its last birthday party in mid-March, the day before Gov. Phil Scott issued the "Stay Home, Stay Safe" order and barred gatherings of more than 10 people. Scribner scrambled to apply for the Economic Injury Disaster Loan program that the federal government rolled out for small businesses, thinking it would provide $10,000 that would eventually be forgiven.

Then she learned that the loan would only provide $1,000 per employee; Scribner and one other staff member were the only people on Romp's payroll. The $2,000 she received from the EIDL program covered just a small portion of her expenses. She put it toward nonrefundable insurance premiums, taxes and monthly bills. But it wasn't nearly enough to keep the business afloat. She still has three years' worth of payments to make up the loan she took to start the business; she hasn't yet figured out how she'll pay that off.

She contemplated trying to sell the business but ultimately decided to sell the equipment, piece by piece. Given the uncertainty of when things will open up again, and the fact that Romp never generated much of a profit, she couldn't imagine someone jumping at the chance to purchase it. "I guess you could say I'm really bad at waiting," said Scribner.

On Romp's Facebook page, Scribner has posted a steady stream of items for sale: kids' chairs for $5 apiece, a changing table for $60, gym mats for $65, a huge bouncy house for $1,750. The pedal go-carts "were gone in about 10 minutes," said Scribner. She kept two of them for her grandchildren, now 4 and 5.

Katherine Zahirovic of Calais celebrated her daughter's second birthday at Romp and visited monthly before it closed; she described the space as "warm and inviting."

"I don't know how to tell my kids that one of their favorite destinations is no longer going to be available," she said. She also feels for Scribner: "I could tell she put her heart and soul into the place."

Scribner, 54, isn't sure what her future holds. "As I get older, my options are less, so I have no idea where I'm going to go from here," she said.

One thing she's sure of? "The answer for me is not to view money as the currency by which I live my life," she said. Now she's trying to focus on "the wealth in my life already — my family, riding my motorcycle, my dogs and my garden."

Scribner still hasn't dismantled the play structure she spent months building. "When I'm away from it, I can look at it objectively, but when I go in there, it really just breaks my heart," she said. "I can't bring myself to take it apart."