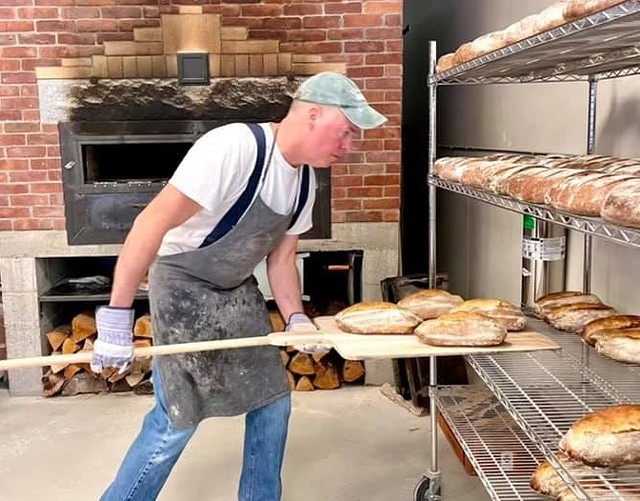 On Tuesday, Larissa Haas of Barre anxiously awaited word that her 82-year-old mother had managed to complete the long journey from her home in Kyiv, Ukraine, across the Polish border.

By Wednesday, Haas had confirmed her mother was safe in Poland, but had left home in such a rush she had no clothes nor medications.

Since Russia invaded Ukraine on February 24, Larissa and her husband, Jim Haas, have messaged constantly with family and friends back in Ukraine while managing the wood-fired bread business they run at Barre’s historic Rise Up Bakery.

Barre's Historic Rise Up Bakery Hires Baker Jim Haas
By Jordan Barry
Food News
“We also tend to be glued now 24/7 to live-streaming news coming out of Kyiv,” Jim said in a phone interview Tuesday. “This is a very traumatic time for us.”

The couple has watched the Russian attack on Kyiv with growing horror and anger. They recognize streets and buildings of the city where Larissa, 53, lived her entire life and Jim, 59, spent 28 years.

In one video Larissa shared with Seven Days, several figures lay twisted in the rubble of a building while a tree burned overhead.

“That building where those dead people were lying, that's where my son used to play hockey,” Larissa said.

Jim grew up in Danby and moved to Ukraine in 1991 to facilitate foreign investment in the country’s food sector. He thought he’d stay for about a year, but then he met and married Larissa. Together, they raised three sons — now 32, 29 and 22 — and eventually opened a wood-fired bakery, AgroEast Baking and Milling, in the small town of Berezan east of Kyiv.

The couple moved back to Jim's home state in 2019 after a job listing for a wood-fired baker in Vermont caught his eye.

Two of their sons are also in the U.S., including their youngest, who is in the United States Navy. Their eldest lives in Kyiv but has been working remotely from Asia for the winter. He was due to return to Ukraine this week and, if needed, “would proudly join [with] everybody to fight for Ukraine,” Larissa said.

For now, Jim said, “We're blessed not to be in harm's way but at the same time, both Larissa and I, and all three of my sons, we have a sense of helplessness.” Larissa said that she received an email about an upcoming meeting of Ukrainians in Lebanon, N.H., to strategize how to generate meaningful support for their homeland. “There's no Ukrainians here pretty much, which is not easy for me,” she said.

The Haases minced no words regarding their perspective on the conflict and how it is being portrayed in the media. Jim said the only Western media he watches is the BBC.

“I don't know why they are still calling this ‘aggression’ or ‘operation’ — it's genocide,” Larissa said. “Why don't they call this a terrorist attack? The missiles [are] flying from Belarus, hitting innocent civilians.

"Russian TV, Russian newspapers, they’re lying. They keep telling everybody that they are liberating Kyiv but there's nothing to liberate," she went on. "They should liberate their brains.”

Jim explained that the 2004 Orange Revolution and the 2014 Maidan Revolution “were very big rejections by the Ukrainian people of Russian dominance of their government and their culture.” Both revolutions were considered defeats for Russian president Vladimir Putin. “You're looking at Russian payback, specifically Putin payback right now,” Jim said.

“Russia still wants to put the USSR back [together],” Larissa added. “They still think they're a mighty empire with a czar.”

While frantic with worry, the couple has had to keep their bread business going, including teaching a planned focaccia workshop on February 27.

“We're running it just the two of us: cleaning, splitting wood, baking, selling, delivering,” Larissa said. “It is extremely challenging, but we have obligations. We have to pay rent. We have to eat. We have to fuel the car…You cannot just stop.”

Their naturally leavened breads are currently sold three days a week, mostly through a walk-up window. Larissa emphasized that batches are small and go through a long 48-hour fermentation. The weekly schedule is posted on the Rise Up Bakery website and she recommends pre-ordering via phone, email or Facebook message.

“This is handcrafted bread. It's not a factory,” Larissa said. “Plus, it's a wood-fired oven. It's not an oven where you can put it to 350 [degrees] and keep going. It's a lot of maintenance of the oven itself.”

The bakery offers a number of Eastern European-style rye breads. Customers who have lived in that part of the world often say, “This really takes me back,” Jim said. 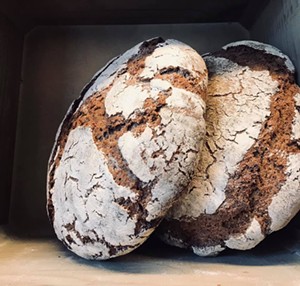 Each sourdough loaf does include a tiny taste of Ukraine. Jim brought two starters with him to Vermont: wheat and rye. They were created in the Carpathian mountains of western Ukraine when he was there consulting for a ski resort bakery.

To pair with organic Ukrainian flour, “I wanted the best water,” Jim recalled. He took a chairlift up the mountain and trudged through the snow “to a little spring that was coming out of the ground. It was the clearest water.”

He mixed flour and water right there and took the chairlift back down. The temperatures were so cold that he wasn’t sure what would happen with the starters. “But, by God, within 36 hours, they both just kind of burst into life,” he said. “I like to say that our breads have some good DNA.”


The Haases have launched a fundraising effort to send essentials like hygiene products, clothes, food, first aid and medications to Ukraine.