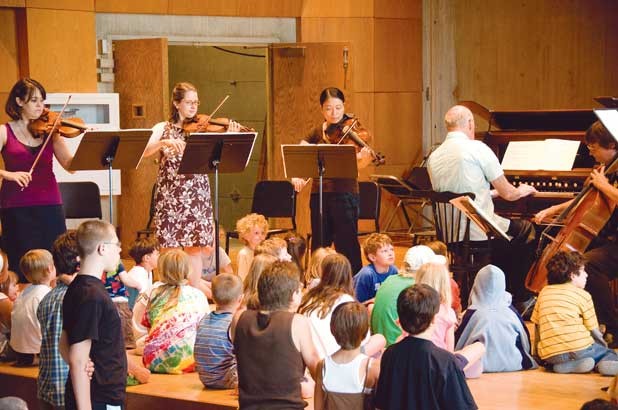 The Baroque period is classical music's gateway drug: Dance-like rhythms, sweet harmonies and lilting melodies make it easy to get hooked. New addicts often don't know that underpinning every toe-tapping trumpet run or virtuosic violin dash is the continuo, usually a harpsichord and cello. This foundation provides rhythmic and harmonic drive - the hallmark of Baroque's infectious perpetual motion - and allows the other instruments to shine.

The continuo was the secret star in the first concert of the Craftsbury Chamber Players' summer season, last Wednesday at the University of Vermont Recital Hall. Two twists to the common configuration made for an unusually rich ribbon of sound. A double bass, played with great glee by Domenick Fiore, enhanced the lower octaves. And the reed organ, serving as keyboard and expertly handled by John Weaver, resonated with much more warmth than the charming but somewhat thin tone of a harpsichord. Cellist Frances Rowell's firm, flowing hand rounded out the talented continuo trio.

Seven pieces made up the evening's menu, covering early and late Baroque styles from across Europe. The lineup of musicians reset for each piece. Three numbers featured seven performers, while the remaining selections called for more intimate ensembles.

Both the opening and closing numbers spotlighted the heraldic flair of the piccolo trumpet, played with confidence and precision by Dominic Derasse. This instrument, commonly used in Baroque repertoire, is smaller and pitched higher than the standard trumpet. Derasse's nuanced performance revealed how the piccolo trumpet's more refined brightness is less, well, brassy than its bigger brother.

In the opener - Czech composer Heinrich von Biber's Sonata IV in C Major - the trumpet line floated above the violas' pulsing energy and flirted with the violin melody. While Derasse showcased the small trumpet's vibrancy in the Biber, he brought out its expressive versatility in the finale, Alessandro Marcello's Concerto in C Minor. The second movement, an adagio, began with mournful minor seconds in the violins. The trumpet's sad, reflective melody entered gently and then soared over the strings. It felt like a lonely musical call that could have come from a windswept 18th-century heath or a shuttered 20th-century jazz club.

Early in the program, Weaver introduced the audience to the reed organ, which sat at center stage. Not much larger than an upright piano, the beautifully carved portable instrument was built in 1885 by Brattleboro's Estey Organ Company, which shipped an average of 1100 organs per month that year. It now belongs to the East Craftsbury Presbyterian Church.

The reed organ creates a sound similar to an early French pipe organ, according to Weaver, which makes it more appropriate for accompanying Baroque music than is the Recital Hall's own large, modern pipe organ. In addition, each concert repeats on Thursday nights at the Hardwick Town House, a venue without its own organ, so the portability allows the Players to present the same program. Another cool detail: The reed organ is "entirely green," Weaver says - it's powered by two pedals that the organist pumps with his feet.

Weaver's solo - the Chaconne au Passacaille in G Minor, by Louis Couperin - showed off the old instrument's honeyed tone, remarkably deep and expansive for the organ's relatively diminutive size. In Georg F. Handel's Sonata in F Major for Violin and Continuo, the organ contributed to the continuo's rich caramel sound, a creamy juxtaposition with the flashing fast notes of the violin's dancing melody. Unfortunately, violinist Katherine Winterstein seemed to hit a few less-than-sweet spots on her strings, scratching out occasionally edgy, unpleasant notes.

Also nestled in the program's first half was a small gem that strayed slightly from the Baroque period: Classical composer Wolfgang A. Mozart's reinterpretation of Johann S. Bach's Prelude and Fugue in F Major. Violinist Gabriela Diaz, violist Liuh-Wen Ting and cellist Rowell made a perfectly blended trio, with a wonderful sense of balance and interplay. Their individual musical voices swelled and receded as thematic elements tossed among the instruments. They executed the difficult fugue seamlessly and joyfully.

Free afternoon mini-concerts, "for children and their friends," precede the evening shows on Wednesdays at 4:30 p.m. in the UVM Recital Hall, and on Thursdays at 2 p.m. at various Northeast Kingdom venues. The ensemble presents an abbreviated version of the evening program, and often invites the children up afterwards to meet the instruments. Occasionally, eager kids drag their parents back for the full concert, Cox says.

A handful of youngsters peppered the mostly gray-haired crowd at Wednesday's Burlington opener. One elementary-school student was overheard talking about taking up the bass. Perhaps she was inspired by Fiore's gorgeous walnut instrument, so enthusiastically played.