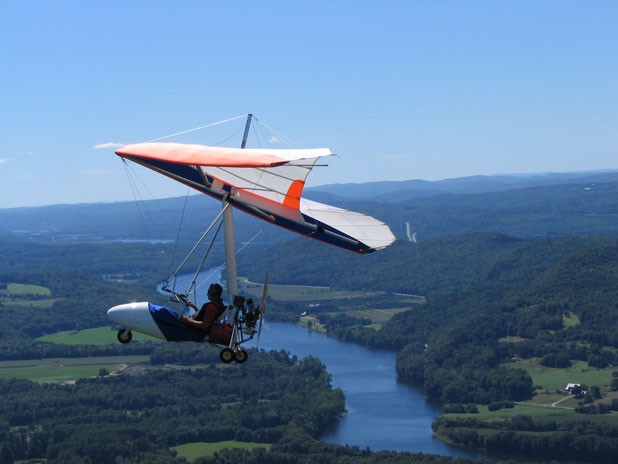 Barnstorming first captured the consciousness of America in the wake of the First World War. Bands of itinerant pilots - many of them ex-Army flyers who managed to buy or otherwise hold on to their sputtering Curtis Jenny or Standard H-1 biplanes - buzzed rural areas and dropped pamphlets to attract locals to air shows, where the pilots made a living by stunning crowds with aerobatics, wing walking and other reckless feats. With no regulations to govern access to the skies, anyone with enough starch and stomach could take the stick and give it a go, with wildly varied results.

Such derring-do may have awed onlookers, but it struck the federal government (and probably the owners of freshly demolished barns and windmills) as an invitation to anarchy. In 1926, President Coolidge signed the Air Commerce Act, which, among other restrictions, made it impossible to fly planes without a license. The years since have added mightily to the pilot certification process, which today entails taking Federal Aviation Administration (FAA) courses, enduring an extensive medical certification, and completing at least 50 hours of flight training. That training runs at least $7500 and must be renewed annually, a process that involves further practical and medical tests. Even with a freshly minted license in hand, pilots still face the problem of finding something to fly. (A new Cessna 172 prop plane rings up at $250,000.)

Amid this welter of regulation and expense, however, there exists a class of motorized aircraft one can buy for less than a tenth of the Cessna's price and fly free of FAA regulation, without a license or medical tests. Its legal flight ceiling is an incredible 18,000 feet, and its structure, sale and maintenance are entirely at the discretion of its owner. Direct an eye to the sky during any decent day over Perkinsville (just north of Springfield), and you may see one or more of these modern-day barnstormers trimming the forest canopy or lazily circling cattle pastures.

An ultralight, according to an FAA classification ratified in 2004, is any single-seat plane weighing no more than 256 pounds (without pilot) and whose fuel tank holds no more than 5 gallons. In terms of performance, it may travel no faster than 65 mph and no less than 500 feet above any populated area. These rules have evolved in ever-tightening circles since ultralight flying began in the 1970s.

Bob Corbo, owner of Raven Soaring Trikes in Perkinsville, read these daunting regulations and found a challenge instead of a chokehold. For 10 years his company has been manufacturing a kind of ultralights called trikes, which are essentially hang gliders built on a three-wheeled undercarriage with an integrated seat and motor. The pilot steers by shifting his or her weight forward and back or side to side, which reorients the wing to make the craft descend, climb, or bank right or left. Customizable to fit riders weighing up to 300 pounds, Corbo's trikes use the natural lift characteristics and low weight of the V-shaped wing as the basis for a number of different models, and his company has the distinction of being the only manufacturer of such ultralights in the Northeast.

Corbo has been involved with ultralights for nearly 30 years, and he's watched as the state's community of small plane builders and flyers reacted to FAA regulations that kept reducing maximum weights, particularly after September 11, 2001. Some pilots continue to use overweight planes in secret, which makes their exact numbers difficult to determine, but Corbo estimates that Vermont's legal and renegade ultralight pilot population is low, hovering around 50.

"For many years, ultralight designers and plane owners went out of their way to make and fly planes that looked like a traditional design . . . rigid wings, fuselage, tail, etcetera," Corbo recalls. "Eventually the regulations just put that kind of manufacturing out of business, and I knew that if I wanted to keep building and flying, I had to invent something new."

Corbo concedes that a flying public accustomed to sleek aluminum fuselages and cruising speeds of 600 mph may greet the notion of taking wing on a stretch of nylon, fully exposed to the elements and at the mercy of a 30-horsepower motor, with a certain degree of anxiety.

"Well, first, the experience has nothing to do with point-A-to-point-B utility," he counters. "It's about living the dream you had - or continue to have - about flying. It's actually more floating than flying. We have some pilots who use them to go from airport to airport, sure, but for the most part it's just a way to get up there and enjoy the view."

Cary Levins, who lives in Sharon and has been flying a Canadian-built Elan trike there for two years, has a similar take on his experience in the air. "I just don't particularly care to fly either high or fast," he explains, "and to me this is the perfect way to take in things you could never see out of a plane window."

Steve Prepost, who grew up in Ascutney but now lives and works in New Hampshire as head hang-gliding instructor at the Morningside Flight Park in Charlestown, agrees that ultralights free pilots from governmental restriction while allowing them to enjoy flight outside the sterility of commercial airline travel.

"An ultralight design like the trike is really the best of both hang gliding and powered flight," he says. "You can use the motor to take off and get to a good altitude, then just turn it off and soar. These wings were designed to glide, so you can go from thermal to thermal and just keep going. Once you descend below about 2000 feet, you can turn on the motor again and go right back up. It's just an amazing sense of freedom."

It's hard to rhapsodize poetically about flight unless you're sure the plane carrying you is solid and safe. The FAA doesn't review ultralight manufacturers, making the choice of a builder critical, Corbo readily acknowledges.

"Well, a trike may look like a hang glider," he says, smiling. "But the similarities end there. Trikes are actually made of all aircraft hardware: Every nut, bolt and aluminum tube has been tested to aircraft specifications and beyond. For a small aircraft of this weight, safety is everything, of course."

All hang-glider-type wings - and so perforce all trike ultralights - feature dive-recovery characteristics. In essence, this means that if a pilot attempts too steep a dive or too drastic a turn, all he or she need do is let go of the central control bar, and the wing will stabilize itself automatically. Motor failure is also a much less grave occurrence in a trike than it would be in a larger airplane, because of the former's good glide characteristics and its ability to land on strips of uneven ground as short as 100 feet. Even in the event of a catastrophic failure such as wing damage, ultralight pilots can have additional insurance in the form of a ballistic parachute. Designed to deploy as low as 200 feet, the powered chute will generally slow the rate of descent enough to save the life of the pilot, and possibly the plane itself.

This isn't to suggest there are no ultralight accidents. As recently as June 28, a pilot named Jim Lanier was killed when his trike-type ultralight crashed near the White County Airport near Gainesville, Florida. Investigations of incidents such as these are not typically conducted by the FAA but by the National Transportation Safety Board, and no specific, comprehensive analysis of trike safety has been released by either organization.

Prepost admits that, however infrequent they may be, accidents are an accepted risk of a life spent in the air. "I'm not going to say that danger adds spice to the experience . . . it's just that it wouldn't be the same without it, if that makes sense," he says.

As with any vehicle, safety is as much a product of the operator's skill as it is of the trike's condition and functioning. Training is the most crucial stage of ultralight ownership, and Corbo won't sell any customer a trike without ensuring they've made plans to learn to fly properly. In addition to Morningside Flight Park, a flight center that offers tandem-seat trike training is Crow Island Aviators in Stow, Massachusetts, and in most cases, a full day of instruction is sufficient to get the basics in hand. Corbo recommends, however, a two-day program for a better understanding of wind and weather variations and how they affect flight.

"It also makes for a perfect weekend," he offers. "And every second invested is worth it."

As Prepost sees it, the payoff of all this planning is an experience like no other in the world. "Flying is empowering . . . magical, and we live in a spectacular area to look at from the sky," he says. "And foliage season . . . my God, you just want to stay up all day."

Corbo recalls a memorable wildlife encounter when listing his reasons for flying. "Birds don't seem to scatter from a trike the way they do from other aircraft, and one day a bald eagle just swooped down and took a good long look at me," he recalls. "We were just soaring together, and I knew that this was something I was going to try to describe adequately for the rest of my life - but never would."