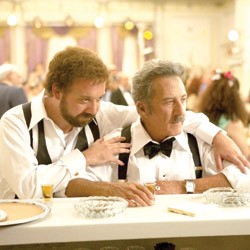 Barney’s Version is categorized by its creators as a comedy-drama, but it’s really more of a mystery. The movie recounts 40 years in the life of a caustic, uncouth, seriously self-absorbed schlub who marries a succession of women each more beautiful than the last. How much of a schlub is he? He’s played by Paul Giamatti.

The question that pervades the picture is What do these women see in the guy? The intriguing thing is that it becomes harder to answer the better we get to know him. Based on Mordecai Richler's final novel, the film introduces us to Barney’s youthful incarnation, a Canadian expat hanging out in bohemian Rome, scraping together a few lira by exporting olive oil and using the money to support a group of friends with artistic aspirations.

This is Barney at his most likable. Giamatti's wig is on the frightening side, but the character he's playing is borderline endearing. Barney's closest relationships are with a budding writer named Boogie (Scott Speedman) and an abusive bombshell (Rachelle Lefevre) who becomes pregnant and tricks him into marriage by telling him the baby is his.

Cut to middle age. Barney has returned to Montréal, bringing Boogie and, thankfully, leaving behind that Chia Pet of a hairpiece. Boogie’s novel is no further along, but he has an impressive drug habit. This becomes pertinent after Barney ties the knot with a monied princess played by Minnie Driver. The marriage sours, driving her into the judgment-impaired best friend’s arms. Following a confrontation, Boogie perishes under circumstances so ingeniously scripted that even Barney goes through life unsure whether he’s guilty of murder.

One reason the marriage fails, probably, is that Barney falls madly in love with a gorgeous stranger (Rosamund Pike) at the wedding and bolts from the reception to ask her out. By this point, our hero is a paunchy, balding, alcoholic producer of cheesy soap operas with zero social skills. So Miriam’s eventual consent to be Wife No. 3 is the sort of miracle that would transform a lesser schlub into a new man. Not our Barney. She may be the love of his life, but that doesn’t mean he won’t end up wrecking hers.

OK, The King’s Speech this isn’t. The human spirit does not triumph. Personal demons are not conquered. If anything, they don’t just prevail but do a victory lap in the final act, as Barney descends into the self-dissolving exile of Alzheimer’s.

This is dark comedy done with considerable style. Giamatti earned a Golden Globe for his superbly nuanced performance, and the picture’s up for — yikes! — a Best Makeup Oscar. The award season has shortchanged it, perhaps because of its dearth of inspirational themes and the bleakness it intersperses with its literate, blackly humorous elements. Nonetheless, it’s a totally immersing two hours-plus at the multiplex. Giamatti — always watchable — is at the top of his game, Michael Konyves does a splendid job of distilling the expansive source material into a pip of a screenplay, and director Richard J. Lewis successfully makes the leap from series work (“CSI”) to serious work.

Did I mention Dustin Hoffman plays Barney’s father, a randy ex-cop? You know a movie has a lot going on when his participation is an asterisk. He’s memorable in a relatively minor part, and it’s great to see him give his recent sleepwalking franchise a rest.

Even if he does, in the end, fock a hooker.