After the 2016 elections, Sinclair Lewis' 1935 novel, It Can't Happen Here, along with other dystopian, anti-fascist writings, sold out on Amazon. While readers nationwide were diving back into the disturbing story, Vermonters in Barnard were recognizing their own connection to the book.

It Can't Happen Here was written in Barnard, where Lewis and his wife, acclaimed journalist Dorothy Thompson, spent their summers. Their history in the town has prompted two new and interconnected projects about the novel and the couple.

BarnArts Center for the Arts is staging a play based on Lewis' book from June 16 through July 1 as part of the Feast & Field Market celebration. Slovenian-born, Barnard-based filmmaker Teo Zagar of Longshot Productions will use footage from the play in a documentary he's making about Lewis and Thompson, scheduled for release in 2019.

Zagar says he hadn't read any of Lewis' work before Donald Trump won the presidency. "It was striking to me," he comments. "It seemed like there were a lot of similarities between then and now in terms of the populist messages. There were echoes of Bernie [Sanders] and Trump ... It seems like Western democracy is under constant threat from would-be dictators and fascists and lazy liberals who don't do enough."

The novel recounts journalist Doremus Jessup's struggle against the totalitarian regime of Berzelius "Buzz" Windrip, a politician who rose to power by promising economic and social reform, as well as a return to traditional values. It condemns fascists and liberals alike — at least those who fail to grasp the implications of unfolding events.

In 2016, BarnArts agreed to partner on the film and became Zagar's fiscal sponsor, providing a nonprofit umbrella to accept donations for the project. Zagar's work prompted the group's interest in and decision to stage the play It Can't Happen Here, adapted from the book in 2016 by Tony Taccone and Lisa Peterson of Berkeley Repertory Theatre. Rather than present the 1936 play written by Lewis and John C. Moffitt, BarnArts executive director Linda Treash opted for the contemporary version because it's somewhat nimbler — as a result of fresh eyes. 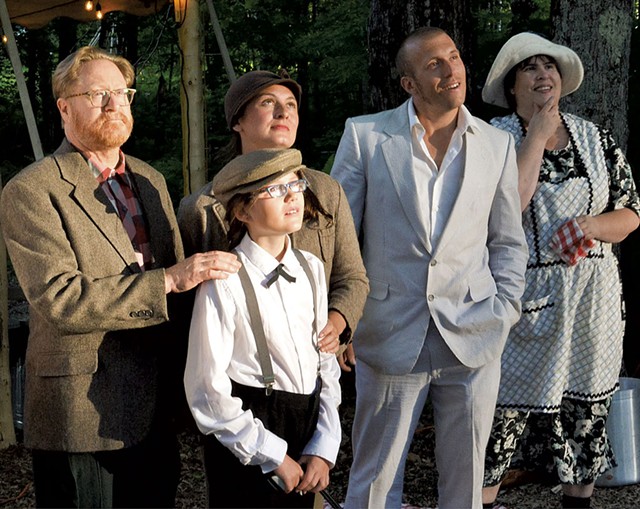 "Sometimes you need a new playwright to come in and not get bogged down in the details," she says.

The BarnArts production featuring regional actors will be staged outdoors at the Feast & Field Market in Barnard — just a mile from the farm where Lewis wrote the book.

Treash says that, though the production will be al fresco, it will also be cozy. "We will have chairs for people. We're going to set them in tight with the stage."

The actors won't have microphones — they'll employ the power of projection — and some will be situated in the audience. There will definitely be action offstage, Treash notes.

And even though the play isn't very hopeful, she remains optimistic about the current political climate.

"What we're seeing now is our constitution and our courts [being] tested," Treash says. "At this point, they're still holding tight. This book shows what happens when they don't."

Zagar places particular significance on the show's location in Barnard. "I think people have a vague understanding of [Lewis' connection to the town] but confuse him with Upton Sinclair," he says. "It's a good opportunity to bring his legacy back to a place where he should be."

The filmmaker is also interested in highlighting Thompson's story. She was among the first American journalists expelled from Nazi Germany after decrying Hitler in her writing. Thompson's experience was in part the inspiration for It Can't Happen Here.

"She wasn't just writing about fascism," Zagar says. "She was writing about nuclear disarmament. She predicted the Middle East was going to be a problem area. She was interested in elevating women to a higher place in terms of governance and running society. I think her words still feel fresh, even though they were written in the '40s and '50s."

Zagar will be on-site this week in Barnard to film the play.