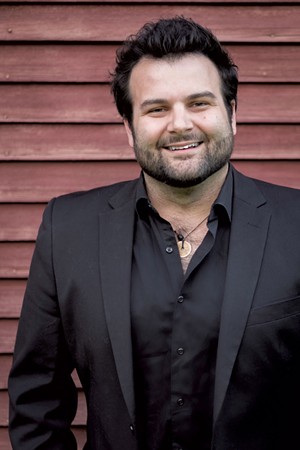 Mozart's 1790 opera Così fan tutte, or Thus Are All Women, contains one of the most beautiful pieces of music ever written: "Soave sia il vento" ("May the Wind Be Gentle"). The song is a trio for soprano, mezzo and bass. In classical music, it is considered so perfect in every way — composition, balance, harmony, orchestral accompaniment — that it's easy to forget that the opera's underlying plot is, well, perfectly ridiculous.

In brief: The women, overtaken by sorrow, are wishing gentle winds on their lovers' boat, which is carrying the men away to battle. Except that the lovers are only pretending to leave; they are actually testing their tutor's claim that the women they love are just like all women — that is, unfaithful. The young men don't believe it, but they've accepted the older man's bet that they can win each other's girlfriends disguised as exotic Albanians. Sure enough, each woman falls for the charms of the other's lover. The plot climaxes with the men disappointed, the women mortified and the tutor singing the operatic version of "I told you so."

"Women are whores: That's really what they're saying," he said by phone. But, like most people who have dedicated their lives to opera, the tenor-director loves Mozart's music. (Collier has sung the role of one of the men, Ferrando, four times.) So, when he cast the work in January for his company's second season, he alerted the singers that, in this #MeToo moment, they would be using the director's own radically new adaptation of Lorenzo Da Ponte's libretto.

For this production at Brandon Music, Collier rewrote and updated much of the antiquated English translation, cutting a third of the opera. ("There are 40 minutes of hemming and hawing for the girls," he explains.) The setting is now a prep school in New Jersey, with the characters' names appropriately updated — Ferrando is now Fred, for example — and pop-culture references replace outdated ones. Instead of going to war, the boys pretend to go to camp. They return disguised as rock stars instead of dark-faced Albanians, thus eliminating the opera's inherent racism.

To be clear, the shortened opera will be sung in the original Italian; while Collier's projected English subtitles run, the singers will convey the adaptation through costumes and limited acting. (Barn Opera specializes in concert productions accompanied by piano.) As Collier explains, even the most clearly sung English-language opera is sometimes difficult to understand, and, in any case, "Italian is just a more lyrical language."

The biggest change comes in the ending. In Da Ponte's libretto, marriage is the women's "punishment," but who marries whom is not indicated. Typically, directors choose one of three paths: "Either the couples stay together, or they switch partners, or everyone breaks up," Collier says. He has crafted a true surprise ending.

In fact, Collier's whole production was to be a surprise — until a supporter emailed him last week to express outrage that the opera was to be performed at all. The supporter assumed Collier would present its misogyny and racism unchanged.

"I was horrified," the director recalls. "It was a well-thought-out email, which gave me pause. If you know me, you know I'm the least misogynist person ever. I was like, Oh, shit, I didn't do my job [of notifying my supporters of the planned changes]." The director immediately emailed his "180-something donors" the press-release equivalent of "I know."

"I completely understand why promoting this type of show, however beautiful the music is, could be viewed as inappropriate. HOWEVER," Collier promises in the letter, his new adaptation is a "slightly risqué, funny, contemporary, outrageous" corrective. "I believe it is our purpose and our obligation to provide the lens through which a 21st-century audience can view an 18th-century work," he writes.

Many canonical operas are misogynist, including Mozart's The Magic Flute, which is on Barn Opera's roster for September 2019. Asked if rewriting libretti is the answer to opera's continued relevance, Collier says Barn Opera audiences can expect more of that, but it's not yet an accepted path forward in the larger opera world. Tweaks are made, but the big houses "have too much riding" on their expensive productions to diverge from tradition, he says. Real change, he believes, happens in the smaller companies.

Collier founded and ran the niche company Opera Brittenica in Boston for five years before moving to Vermont to found Barn Opera in December 2017. He performs with companies of all sizes around the country, including Opera Company of Middlebury. OCM director Doug Anderson has also used projections of updated English supertitles while the company sings in the original language.

Not all operas are misogynist, Collier opines. "I don't think Puccini, with all the dying sopranos, is," he offers. "These are tragic characters who maintain their strength until the end. Puccini loved strong women."

With Così fan tutte, however, he says, "This is a time period where the time was misogynist. I don't blame [Mozart and Da Ponte], because this is what they knew. But I don't excuse them, either.

"You can go too far, too," Collier adds. "Those director's-theater productions in Europe" — also known colloquially in the opera world as Eurotrash — "that throw out everything, sometimes at the expense of the music, come across as apologetic to me."

This tenor-director is not about to apologize for opera. But he would like to change the title of his company's upcoming production.

"I think it's really 'Così fan tutti,'" he avers, using the Italian word for "everyone" in place of "all women." "Everyone is like that. But I'm not sure I can really buck 230 years of history in the title."