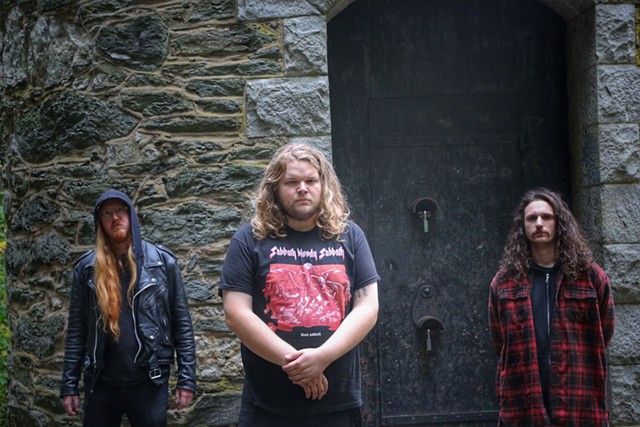 At first glance, Vermont's metal scene might appear an insular sort of world. In a state with a reputation for laid-back audiences, metal has never been the top-dog genre, so the head-bangers have tended to stick together with a clan-like mentality. Small sample sizes obscure the diversity and wizardry within the scene, as the state plays host to some of the most innovative and fresh-sounding heavy bands in New England. Right now, no one carries that flag higher than Brattleboro's Barishi.

Formed eight years ago in tiny Jamaica, Vt., by childhood friends Graham Brooks (guitar, vocals), Dylan Blake (drums) and Jonathan Kelley (bass), Barishi are a scene stalwart. They caught some attention with their 2013 self-titled debut before signing with the French metal label Season of Mist.

The resulting album was the brutal Blood From the Lion's Mouth, one of the best Vermont records released in 2016. Picking up where the raw riffage of their debut left off, the sophomore effort was a far more sophisticated beast, bouncing from progressive leanings to stoner metal, from Baroness-like guitar melodies to latter-day Deftones-style atmospheres full of dread and colors.

From there, Barishi set out to establish themselves as one of the premier live bands in the region and in their genre. Those efforts culminated in a recent American and Canadian tour with Brooklyn post-metal heavy-hitters Tombs.

It has been a season of change for Barishi during their ascension, however. The band parted ways with singer Sascha Simms last year and returned to its power-trio roots — a reinvigorating change, according to Brooks. Seven Days checked in with him over the phone to see what the future holds for the group.

SEVEN DAYS: Losing a singer is no small thing, but you guys were an instrumental trio before Sascha joined. Have you gone back to that?

GRAHAM BROOKS: Actually, I ended up taking over vocal duties. It's a pretty new thing, but it just made sense. If you asked me, like, six months ago: "What do you think about doing vocals?" Well, it's probably the last thing I'd ever want to do.

SD: Funny how that turns out. But you're warming up to it now?

GB: Yeah, I'm enjoying it, for sure. It's a whole different experience, more cathartic. And I get to, you know, get into the music a little more. And honestly, in some ways, singing makes it easier for me on guitar, at least rhythmically. I can really lock in. I also don't think about my playing as much, which sort of counterintuitively helps me. The downside is, there are some things I just can't play on guitar while I sing, so we just don't do those things or play those songs anymore.

SD: Has that changed the dynamic of the band? Switching vocalists could really alter a band's DNA, as we've seen many times in the past.

GB: Well, Jon and Dylan and I went to high school together. Dylan and I have been playing together since we were 12! So, being a trio, it's cool to be back in that dynamic again. It's been really stress-free, which is its own reward.

Growing up, my dad was a big Cream fan, a big Jimi Hendrix Experience fan, so that's always been my favorite kind of lineup for a band. Like Motörhead! I fucking love Motörhead, who were a three-piece for most of their career.

SD: You guys are working on new material for the next album, yes?

GB: Yes! We've been talking with our label — we think we're going to go into the studio this winter. We have about five or six tunes ready to go, and they're all mostly 10 minutes long, so we're almost there.

SD: What's the writing process been like? I know you guys spend a lot of time on your songs, on your arrangements. But you have to handle lyrics now, too.

GB: We're all chipping in with lyrics, which is cool. I'm writing most of the music at this point. I was never too stoked for lyric writing — I was too hyper-aware of how lame things might sound. But we stopped caring about that, which has been so freeing.

Some bands really put a lot of deep thought into their lyrics. But at some point, we stopped caring if we wrote about some sci-fi stuff or bong wizards, whatever, you know? We just wanted it to be fun. And I'm all about going on quests with our songs. Sometimes they might be shitty little jaunts to the convenience store, but my dream is to make [the songs] into a quest.

I'm really proud of how hard we work on songs now, how harsh we can be on ourselves. If there's a part in a song that isn't working, no one gets mad if we cut it anymore. I think we have a better understanding of how to use space than we did at the beginning, really. We don't have to always be hammering someone over the head with the riff.

SD: Would you say you're more discerning with what ends up as a finished Barishi song?

GB: Oh, yeah. Dude, we used to write almost a tune every rehearsal! Maybe we wouldn't all love it, but there would be a sense of "Well, fuck it, that's a song."

There were a few things on the first record and Blood From the Lion's Mouth where I'm not sure I was too psyched they made the cut. So now we're really brutal on ourselves. We go through the songs with a fine-toothed comb.

SD: Brattleboro has quite the scene for a relatively small town.

GB: It's crazy. For a town with, I don't know, maybe 12,000 people, to see King Tuff and Witch and all these other notable artists from such a small area, there has to be some kind of an anomaly. There's a super high concentration of really talented musicians from all sorts of genres, and the common thread they all have going is that they don't have anything in common.

The only real issue Brattleboro has is that, for all the amazing musicians here, there isn't an abundance of venues. We've got the Stone Church now, which used to be kind of a DIY thing, but it's a proper venue now where all sorts of music happens. Really cool.

SD: So you think the small scene actually helps, then?

GB: Sure, to a degree, yeah. The thing that Vermont bands have, and not just in metal, is that it's so isolated here. Even Burlington isn't really a major city where you have like, 10 bands killing it in every subgenre. And I think having that limited exposure to other bands has actually helped a lot of Vermont bands find their own voices.

I mean, if Barishi have any sort of uniqueness to our sound, it comes from us being really bad at copying other bands, so we just do our own thing. If we stand out at all, it's probably also because we've been doing this a while. That's important. It might be a small scene, but there are lots of quality bands.

A few years back, Vaporizer was selling out Nectar's every night. Look at Ghastly Sound: They just played Psycho Las Vegas. That's a killer festival and a big deal for those guys. You don't have industry people buzzing around here — you have to do your thing and be your own band. And I think that's what we do.