One of the least noted pleasures of drinking in a high-end lounge has nothing to do with the booze. As with restaurant service, successful glassware should do its job well, but the point is kind of not to think about it.

Still, one of the unique joys of dining at Quechee's Simon Pearce Restaurant — located above the glassblower's atelier in an old mill overlooking the Ottauquechee River falls — is drinking from house-blown tumblers and stemware. During the day, you can sidle down the steps to the mezzanine studio and observe workers pull molten glass from the furnace, then spin and blow it into cups, bowls or candelabras. It's a delicate dance wherein each worker gathers, twirls, heats and then passes the work-in-progress to another until the piece is finished. The process is a marvel to watch. And, at probably 80 degrees, the room is a great place to hang out on a cold winter's day.

Upstairs, that glassware goes to work. Simon Pearce is Vermont's only restaurant that'll air your wine in a house-blown decanter, and it's one of the few that bothers to serve merlot and malbec in different glasses. 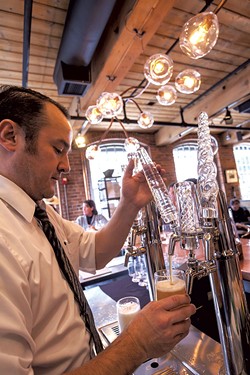 In August, the restaurant annexed a new bar just off the main entry. Open from 10 a.m. to 10 p.m., it's a casual alternative to the formal dining room, where meals happen over white napkins and other finery. Despite its relaxed feel, the new bar is comfortable and refined.

The walls are brick, mottled with chinks and dings and more than a century of weather; the many-paned windows flood the room with blue winter light. It's the kind of place where drinking alone feels like a luxury — a quiet world away for a solo afternoon sip.

While many area destinations can feel like tourist traps, this bar seems to attract a mix of locals and visitors. One evening last week, friends visited with the bartender as an older couple settled in for a twilight snack.

The wine list offers 22 pours by the glass. Most are familiar and approachable but nuanced — workhorses when it comes to value.

While many bars offer complimentary popcorn or peanuts, Gazda provides freebie potato chips: ethereal, amber-hued creations that crisp and dissolve into a tantalizing slurry of sweetish salt the moment they encounter a sip of beer.

A few simple chips gave way to an order of duck drummettes. The spare presentation — just five Long Island drumsticks, trimmed French to the bone, confited, flash-fried and tossed in sauce — almost fooled me into thinking I was at a regular bar.

As I picked my way through the arched legs, each fall-off-the-bone bite teased out a new flavor. First: a touch of nose-tickling, fried warmth. Then, the meat's tree-nut ducky richness, the sticky-sweet ginger-shoyu glaze and something a little licorice-y. Fennel? Later, a darker note, vaguely herbaceous — cumin, maybe, but half the fun is in not knowing. Finally, the toasty crackle of black sesame seeds, followed by a few bites of pickled ginger and vegetables. The only hitch: I was full, but I wanted more. 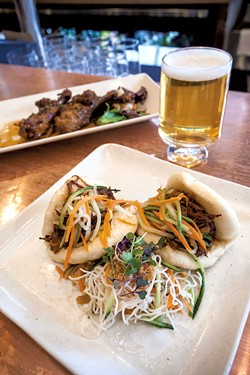 I sipped my beer. Often, I drink Hill Farmstead with a certain focus, trying to decide for myself — over and over — whether Shaun Hill's beer is really among the world's best, like the beer websites perennially say it is.

On that, my mind changes from day to day. Is the beer cold enough? Should it warm up a little? Does it have that wet-sock, dirty-draft-line stench? Is it well poured and correctly carbonated?

Hill can't control any of this — once his beer leaves the brewery, it's on each bar to handle it with care. Most do well enough, but I've sipped more than one Hill Farmstead brew that was compromised by careless handling.

But served in Simon Pearce's exquisite handblown pint glass and poured by one of the most professional bartenders I've encountered in some time, Hill's Conduct of Life — a smooth pale ale that balances tropical-citrus hop character with crystalline malt and a clean, just-bitter finish — was perfect.

*Correction March 8, 2016: An earlier version of this story referred to Brian Gazda as the current chef at Simon Pearce Restaurant. In fact, Gazda departed the restaurant earlier this winter.