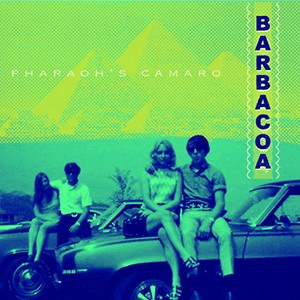 Last summer, thanks to an amateur assassin/really bad driver, I discovered the joy that is a morphine dream. For a few days of recovery following an accident, my circadian rhythms took me on some very strange trips. One dream stands out: I was driving my first car — a Peugeot station wagon, baby — with an ex-girlfriend and a random cat named Corporal Peepers. A massive Technicolor wave was cresting behind us as we sped away. I can still see with vivid clarity the foam and pulsing colors of the water getting closer.

Within minutes of hitting "play" on Barbacoa's latest LP, Pharaoh's Camaro, I was right back in the dream. The washed-out sounds of postapocalyptic surfing hit me, and it was as if someone had pulled an Inception on me, laying down a killer soundtrack to my dream while they were at it.

That someone would be local guitar legend Bill Mullins. One of the area's most respected players, Mullins has been slinging his ax from club to club in Burlington since the 1980s, popping up in bands such as Blowtorch and the Chrome Cowboys, as well as putting out indie-rock-leaning solo work. With Barbacoa, however, Mullins dives deep into his Dick Dale cosplay and goes full-on instrumental surf rock, making records that sound like endless summer.

Barbacoa are viciously tight live. Mullins is the spoke around which the band's roster wheel spins — the lineup currently includes Swale drummer Jeremy Fredericks, guitarist Jeff Baron (a Seven Days employee) and longtime bassist Kirk Flanagan. On record though, Barbacoa are essentially a Mullins solo project. He plays everything on Pharaoh's Camaro, just as he did on two previous releases under the moniker.

Mullins' evocative, crystalline guitar work is the record's centerpiece. It's easy enough to plug a Stratocaster into a Fender Princeton Reverb amplifier, go nuts on the tremolo bar and make some generic surfy sounds. What Mullins does, both as a composer and a player, is a world away from simple genre worship. His songs are full of dynamic musical shifts that convey moods as well as any lyric.

On "Fistful of Fender" — a nod to spaghetti Western composer Ennio Morricone — he builds an ominous-sounding bedrock of acoustic guitar, then peppers riffs across the song like stars in a clear sky. Those riffs serve as themes and motifs, wordless character development for whatever film (or morphine dream) the music calls forth in the listener's head.

Mullins' guitar tone is a thing of wonder. To properly play surf guitar, one must twang. But, too often, guitarists think this means jacking up the treble knob or, worse yet, pushing the gain. Mullins has a depth to his tone that comes more from his hands than any pedal, and the way he injects tonal character in his playing makes it easy to ignore the lack of a human voice on the record. The melodies he lays down on "Shadowcaster" and "Bikini Island" could be lost themes from some previously undiscovered spy show from the '70s.

Pharaoh's Camaro continues an unbroken run of excellent releases from Mullins. It can be too easy to take for granted a musician of his skill and consistency. But this LP serves as a reminder of how lucky we are to have an auteur like Mullins plying his trade in Burlington.

Give Pharaoh's Camaro a listen at barbacoa.bandcamp.com.