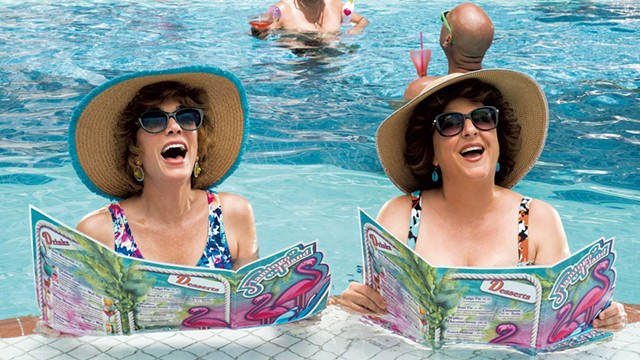 Back around Valentine's Day, all of film Twitter was atwitter about a new streaming comedy written by and starring Annie Mumolo and Kristen Wiig, the team behind Bridesmaids. Now that it's on Hulu as well as VOD, I watched Barb and Star Go to Vista Del Mar, the narrative feature debut of sitcom director Josh Greenbaum. The big question: Will it serve as a fun summer substitute for those of us who aren't doing vacations this year?

Meanwhile, in small-town Nebraska, best friends Barb (Mumolo) and Star (also Wiig), both single and middle-aged, have turned their furniture-store jobs into an endless coffee klatch. When a customer has the audacity to try to buy the couch on which they spend their days chatting, they shoo him out of the store.

But corporate restructuring puts an end to Barb and Star's fun, and they pack up their culottes and head to Vista Del Mar, hoping for a little resort revivification. When they encounter the lonely Edgar, it's lust at first sight. The aftermath of their dalliance sweeps the women up in Sharon's plot, and they embark on a wild ride involving musical numbers, a crab with the voice of Morgan Freeman, and a suave personification of sportswear company Tommy Bahama (Andy Garcia).

If Barb and Star personify the concept of "basic" — and they do, proudly — their story embodies the concept of "random." It's easy to see why this stoner flick about squares dominated the discourse during the brutal last stretch of a pandemic winter. Visually, Barb and Star Go to Vista Del Mar is a therapeutic tropical cocktail of a movie — all bright sunlight and candy colors, a tiki resort streamed into your living room. Its plot has the benign bizarreness of something a shut-in might dream after downing a few mild edibles.

How does the movie play now, in a more opened-up world? Well, it's no masterpiece of sophisticated humor. With their Midwestern accents and a sense of style that stops at Costco and Chico's, Barb and Star are broad caricatures of flyover-state "normality." The plot in which they're embedded is a barely warmed-over parody of spy flicks. While bits like the Morgan Freeman crab are funny, the absurdity never has any deeper resonance.

The movie works, though, because its beating heart is Barb and Star's friendship chemistry. Wiig and Mumolo interact like two people who've done years of improv together, learning each other's rhythms. The funniest parts of the movie are their dialogues, which play out like rambling improvisations in which one offers a prompt and the other runs with it.

"It's so funny to think all the raccoons in the world are sleeping right now," Star notes at one point, apropos of nothing. In another scene, an offhand mention of the name "Trish" spawns a bit that lasts the length of a plane ride. By the time the women reach Florida, they know the hypothetical Trish as well as they know themselves.

I don't think I've seen such a wholehearted and unabashedly goofy tribute to female friendship since Romy and Michele's High School Reunion. Like preteens in the first flush of being BFFs, Barb and Star are endearingly enthralled by each other. While their mutual interest in Edgar does lead to trouble in paradise, the rivalry doesn't last long.

Lovesick Edgar, puppy-dogging after his icy villain boss, also seems to be stuck at a pre-adult stage. (His goal is to get Sharon to declare them an "official couple," a middle school notion if ever there were one.) Dornan got a lot of flak for his wooden portrayal of Christian Grey in the Fifty Shades of Grey movies, but really, who could make that character human? Here, he redeems himself by, among other things, fully committing to singing and dancing his way through an "Against All Odds"-style ballad that ends with him tearing off his shirt. I defy anyone who sees this not to start giggling like a middle schooler.

If Barb and Star has any message beyond the perennial "Friendship is magic," it might be "Don't let anyone shame you into pretending to be less basic than you are." Pumpkin spice lattes, bright-colored culottes, tiki vacations — Barb and Star embody that culture, and they're enjoying the hell out of their lives. We should all be so lucky.

Romy and Michele's High School Reunion (1997; Disney Plus, rentable): Lisa Kudrow and Mira Sorvino play a couple of underachievers trying to reinvent themselves for one night in one of the all-time greatest silly friendship comedies.

Step Brothers (2008; rentable): Their characters may be hopeless man-babies, but Will Ferrell and John C. Reilly are hilarious as middle-aged slackers forced to cohabit by their parents' marriage.