Banjo Virtuoso Béla Fleck Reflects on 30 Years With the Flecktones 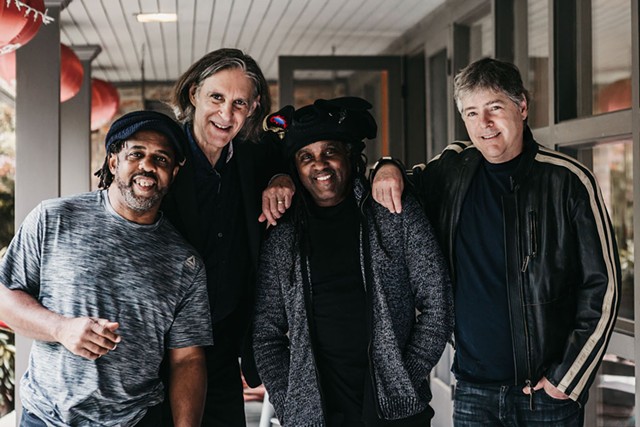 Before Béla Fleck came along, the banjo was mostly relegated to the world of roots music. But the New York City-born banjo virtuoso changed the world's perception of the stringed instrument, primarily through the work of his longtime quartet, the Flecktones. By fusing together elements of traditional bluegrass and contemporary jazz, Fleck, 61, pioneered a compositionally intricate hybrid sound that garnered him an enduring following.

Fleck is something of a Grammy Award magnet. Famous not only for winning multiple statuettes from the Recording Academy — 14, at last count — he has been nominated in more categories than any other artist. From his lauded early work in the 1980s with the trailblazing progressive bluegrass group New Grass Revival to an acclaimed 2016 self-titled folk album with his wife, fellow banjo player (and Middlebury College Language School alum) Abigail Washburn, Fleck's music has been recognized 36 times in nearly a dozen genres, including pop, jazz, country and classical.

In 2008, Fleck unveiled Throw Down Your Heart, a documentary by Sascha Paladino that chronicles the banjo player's travels in Africa as he examined the origins of his instrument. A new box set featuring an extended version of the doc is due out soon.

Béla Fleck and the Flecktones perform on Saturday, December 7, at the Flynn MainStage in Burlington. Seven Days caught up with Fleck by phone.

SEVEN DAYS: Congratulations on 30 years with the Flecktones! At this point in your career, does touring feel like a victory lap, or is there still a lot of track left ahead?

BÉLA FLECK: I do think there's a lot of track left ahead. There are a lot of things to try. And I'm gonna go down fighting. Once in a while, it's fun to get the band together and play some of the stuff from the past. Everything doesn't have to be looking forward. And the Flecktones sort of naturally are looking forward, just because of who everybody is and what they do. But we haven't created new music in a while, and we're discovering as we reexplore our catalog that there's a lot of neat stuff in there. We worked hard when we were young, and there are lots of hidden treasures — tunes we haven't done for 20 years.

"There are lots of hidden treasures." Béla Fleck tweet this

SD: What's something you used to worry about in the early days that you hardly think about anymore?

BF: I don't worry about whether they're gonna like it. Now, we just go be ourselves. It's a little more mature. I think we can be a little more secure.

SD: What are some differences in the way that you develop music with your wife as opposed to with the Flecktones?

BF: With the Flecktones, we hardly ever talked about much. We would sit and play, play, play, and then come out of a room and have an arrangement of some kind of complicated piece. Nobody had discussed a single word of it.

Abby and I talk a lot. There's a lot of discussion. And the creation of the music can be more uncomfortable. We have to have a lyric we both like; we have to work on textures. It's more challenging, honestly, because of the nature of what it is. With the Flecktones, I always come up with some weird little tune. I just start playing it, the guys start playing along, and I wouldn't say what the chords were until after a while.

That band is all about being free, whereas for me and Abby it's more of a structured situation. We've got something to prove. When we first started, it was like, Could we do a whole night of music with just two banjos?

SD: Your discussions with Abby, are they more about technique and structure as opposed to history and culture?

BF: The history and culture stuff might come into the songwriting. There are certainly things we respond to that we want to talk about in our songs. But we might be talking about what kind of accompaniment patterns Abby has that might work for a banjo solo, or what kind of a solo should I play over her basic rhythm, or how can we introduce more harmonies into these two banjos? What are ways we can make it really natural but innovative at the same time?

SD: I read that a rerelease of your 2008 documentary Throw Down Your Heart is forthcoming.

BF: Yes, we're working on the package right now. It's gonna have the original CD and the second CD. There were two albums that came out of that project. The documentary is gonna be part of it, with an extra hour of footage of great interactions with African musicians. It also includes a new recording with me and Toumani Diabaté, a great kora player from Mali. There are, like, six different elements. It's exciting.

SD: Had it been a while since you revisited the doc before you started working on the rerelease?

BF: Yeah. It's one of those things, similar to the Flecktones, where I look back and, this sounds really egotistical, but it's better than I remembered. You wanna think everything you're doing now is the best, and then you get face-to-face with some things you did back then and go, "Oh, man, we must've worked hard on that. We were busy little beavers."

BF: I prepared a ton for the first year and prepared very little for the second year. Part of it is because I learned that a lot of the best things that happened at the camp the first year were very spontaneous.

I think I was worried about the sophomore jinx, and I didn't know how to prepare for the second year. I changed two of the teachers and kind of kept my basic approach. I think I got a little bit better at teaching this year. Next year, I think I'm gonna prepare more, because now I have a little more data.

SD: Who's an up-and-coming musician you admire?

BF: There's a young banjo player named Matt Davis who I found out about through my camp. He's one of the first banjo players I've come across who has serious jazz piano chops. Every time I've run into walls trying to play jazz or classical things, it's because I don't have piano knowledge.

SD: Maybe you and your 6-year-old son, Juno, could take lessons together.

BF: Yeah, I've thought about that. But he's got very much a mind of his own. A few months ago, I said, "Juno, it's time for you to start taking music lessons. We need to figure out what instrument." And he immediately said, "Yeah, I wanna learn drums and piano and banjo, like you and Mom." I think he was just shining me on, because what he really wants to do is play golf.

One day, I heard him strum my banjo. I said, "Juno, whenever you're ready, I'll show you how the banjo works." He said, "No, Papa. You play banjo, I play golf."