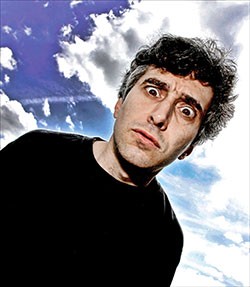 Sure, crafting isn’t just for grandmas these days, but does crafting ... rock? Absolutely, if the ladies at Burlington’s The Bobbin Sew Bar & Craft Lounge have anything to say about it. This Saturday, June 6, the Old North End studio and education center hosts Joe Jack Talcum of Philadelphia, founder and front man of irreverent late-’80s cult band The Dead Milkmen. The guy behind “Bitchin’ Camaro” and “Punk Rock Girl” will join locals for a few hours of “craftastic fun” using wood blocks to make prints for flags and tags, according to the Bobbin’s flyer. They call it “Craft With the Band.”

Bobbin co-owner Gyllian Svensson writes in an email that this “is an idea that we’ve been working on at The Bobbin for a while now; we were just waiting for the right act to really launch the project.” When local musician Jarmac T. Harvys told her Talcum was coming to play a show at Gezellig Theatre — the performance space he runs with Radio Bean owner Lee Anderson — Svensson suggested he stop by The Bobbin first. “Joe Jack was all for it, so the event was born,” she says.

Will the singer get down and dirty with the printmaking? “I’m not sure how much of a crafter Joe Jack is,” says Svensson, adding that she “did ask for his input.” She hopes to make Craft With the Band happen several times a year.

Tickets for this one are going fast, but those who don’t snag them may be able to catch Joe Jack Talcum playing with 17th Fire, Train Wreck Kelly and Goldtown the same evening. Craft on!

‘Craft With the Band’