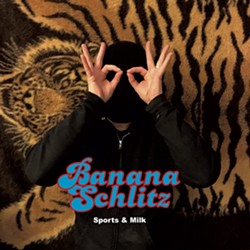 Nostalgia is a powerful thing. And in 2016, it seems like we can't get enough of it. Axl Rose and Slash reunited Guns N' Roses at the Coachella Valley Music and Arts Festival, and other bygone bands including Lush and Temple of the Dog announced tours. Netflix series and 1980s Spielberg dry-hump "Stranger Things" broke the internet, suggesting that if you can get the details right, actual content doesn't matter as much as the presentation.

The physical album comes as a delightfully packaged cassette tape. The liner notes include some neat photos and the complete song lyrics — the latter a nice touch that's often missing in the streaming era. Cassette seems like the most appropriate format, and not just because the music pays homage to the early days of indie. For one thing, the basic tracks for every song were recorded on four-track. Only vocals and some keyboards were added via contemporary tech during the mixing process.

Cooley wrote nearly all of the songs, and his angst seems in step with the era for which he pines. "Again Over Again" is a raw, intimate ballad about accepting things the way they are, and about how much that can suck. "I was sitting in the park / My dad was across the street / Drinking in a bar / He didn't know that I was watching," he sings. But it's not all pain. "Used Future" is a hip-shaking, danceable cut in which Williams and Cooley get down like the B-52s' Kate Pierson and Fred Schneider gone electroclash.

The one track not penned by Cooley covers a section of Keith Forsey's The Breakfast Club score titled "Makeover Theme." Maybe your heart doesn't die when it grows up. Whether this inclusion is meant to be a joke, super-duper serious or something in between, Cooley successfully reinvents the iconic moment through his own filter, swapping electric piano for fuzzy guitar on the lead melody.

To ask whether Sports & Milk is a pinnacle of songwriting and musicianship would be missing the point. And that point is this: longtime friends coming together to produce a tribute to the era in which they all got their start.