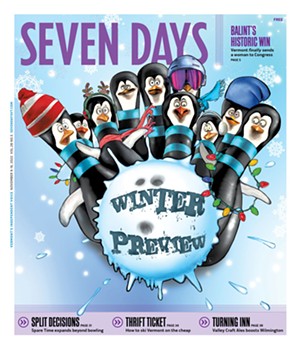 By the time Seven Days' Winter Preview issue rolls around in early November, we've typically already had a taste of what's to come, weather-wise: a blast of temps in the teens, some flurries — hell, sometimes even a full-blown snowstorm.

This year? Not so much. Over the weekend, Vermonters grabbed their sunscreen and sported shorts and T-shirts during record-high temps that hovered in the high 60s — at night.

The warm weather has one silver lining: Some Vermonters have delayed turning on their home heating systems, which will be more expensive to run this winter. Both heating oil and kerosene prices have spiked dramatically, prompting a call for more environmentally friendly — and price-stable — heating sources such as wood or electric heat pumps.

But this balmy preview of our apocalyptic, climate crisis-fueled future won't last. Cooler temps are on the way, and, yes, snow will fall this year.

That's good news for the folks at Killington, who are nervously waiting for Mother Nature to get her act together. The resort is set to host the Audi FIS Ski World Cup later this month, and, as of press time, its Superstar trail is still totally bare.

Resort officials are confident they can pull it off, with some natural — or human-made — snow.

While we wait for ski stars to hit the slopes, read up on Vermonter Mike Nick's headline-grabbing exploits 24 years ago. Nick won gold at the 1998 winter X Games before launching a successful career in winter sports branding and marketing.

Nick owes some of his success to buddy J Levinthal, the man who invented the twin-tip skis that Nick wore on his gold-medal run. Levinthal, a ski savant and the brains behind J Skis, is getting ready to open his first brick-and-mortar shop on Burlington's Main Street. Along with selling gear and accessories, the shop will be a "ski-themed environment" where people can unwind and commune, après-ski or not.

Buying all that gear can leave you light on cash. Luckily, Kirk Kardashian writes about ways to ski on the cheap, including bringing DIY lodge lunches, nabbing discounted lift tickets and taking bus transpo to the mountain. In the same vein, reporter Rachel Hellman scored a sweet deal on cross-country skis when she visited the annual Cochran Ski & Ride Sale over the weekend.

At Stowe Mountain Resort, lift ticket season passes have been cheaper since Vail Resorts bought the ski area in 2017 and implemented its Epic Pass. But locals say those low prices have led to traffic jams on the road to the mountain — and on the slopes themselves. Some plan to ski elsewhere this winter.

They could head 140 miles south to Vail Resorts-owned Mount Snow, which is also on the Epic Pass. It's not far from Valley Craft Ales in Wilmington, which will open a taproom and inn this month.

If skiing and riding aren't your jam — or if the weather isn't cooperating — you've got other options. At St. Albans' new Hard'ack Pool, residents and nonresidents can swim beneath a massive, inflatable white dome that helps keep the water a tropical 80 degrees in colder months. Not far away in Colchester, bowlers can take aim at Spare Time Entertainment, one of the few alleys still open in the state. The refurbished 45,000-square-foot center also features the Game Zone, for those who prefer higher-tech forms of indoor recreation.

Looking for a cozier, solo activity? Steve Goldstein highlights a new book by Vermonter Gary Wright, who spent decades as an NCAA hockey coach. Striding Rough Ice: Coaching College Hockey and Growing Up in the Game recounts the 70-year-old's career, including a record-setting tenure behind the bench at American International College in Springfield, Mass.

However you handle winter, make sure you take full advantage of it. The season just might be fleeting.

The original print version of this article was headlined "Snow Way"