Ballot Basics: 10 Things You Should Know About Voting in Vermont 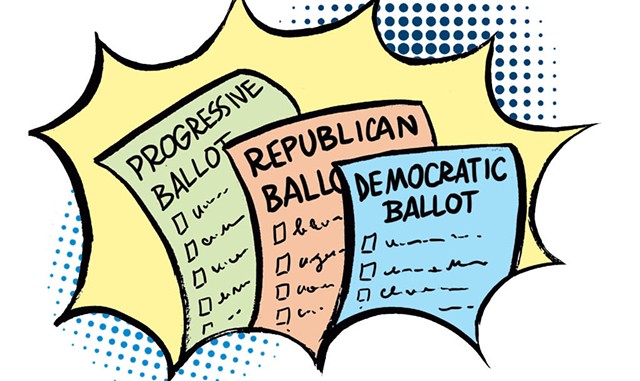 First time voting in Vermont? First time voting ever? Good news: You're in a state that makes it easy. Here's a top 10 list that will help you participate in the primary elections on August 9.

You have to register to vote. In Vermont, there are lots of ways to do that. You can register online at olvr.vermont.gov, by calling 1-800-439-VOTE, by visiting your city or town clerk's office, by filling out a voter registration form anytime before Election Day or at the polls. Since 2016, all Vermont drivers eligible to vote have been automatically registered when getting or renewing a driver's license. Check to see if you're already on the state's voter checklist by entering your name and birthdate at olvr.vermont.gov.

There are three primaries on August 9, but you can only vote in one. On primary Election Day, the Republican, Democratic and Progressive parties will pick their candidates for the general election on November 8. You can only vote for one slate of candidates. If you want to "split your ticket" by voting for Democrats and Republicans, you'll have to wait until the fall.

You don't have to decide which primary you're voting in until it's time to vote. Some states make you register in advance as a Democrat or Republican to participate in party primaries. Not Vermont, which has open primaries. When you're ready, fill out whichever ballot you choose.

You can vote early — in person, or by mail — for any reason. tweet this

If you haven't asked for a mail-in primary ballot, you won't get one. All voters on the checklist will get a mail-in ballot for the general election. For the primary, however, you have to ask. The Secretary of State's Office sent out a postcard reminding voters they have to request a mail-in ballot for the primaries to get one. Why? Because voting by mail in a Vermont primary is complicated. If you do it, you'll receive all three ballots. Though you only fill out one, you need to return all three — in two separate envelopes. It's expensive, too, sending all those ballots back and forth. If you're planning to vote by mail this time, be sure to send the ballots early enough to avoid postal delays. Also, read the instructions very carefully. Otherwise election officials won't count your vote.

In this primary election, you can vote when you're 17 — if you'll turn 18 by the November 8 general election. An early birthday present!

You don't have to live here for a certain amount of time before being eligible to vote. As long as you're a U.S. citizen, age 18 or older, count Vermont as your primary residence, and take the voter's oath, you're good to go.

Convicted felons and current inmates can vote in Vermont. Your criminal record has no bearing on your ability to vote here.

You can vote early — in person or by mail — for any reason. You don't need to justify your decision. Just stop by your city or town clerk's office and request a ballot during business hours anytime between now and closing time on the last business day before the election. You can fill it out on the spot and turn it in. No lines.

If you're an out-of-state college student living in Vermont, you can vote here. Like any other voter, you have to prove that you're old enough and that you live here. But if you vote here, you can't also cast a ballot in your home state. You can only vote once.

If you're sick or disabled, you can request at-home ballot delivery. Just contact your city or town clerk before closing time on the last business day before the election. On Election Day, two local justices of the peace will drop by with a ballot. When you're finished, they'll bring it to the ballot box to be sure it's counted.

Got more questions about voting in Vermont? Check the website for the Vermont Secretary of State's Office, sos.vermont.gov. It includes answers to commonly asked questions, as well as a section entitled "Myth v. Fact," which addresses election fraud claims.