Becca Balint is officially one step closer to becoming the first woman elected to Congress in Vermont’s history, defeating Lt. Gov. Molly Gray in the Democratic primary for U.S. House.

Gray conceded around 8:40 p.m. and Balint, Vermont's Senate president pro tempore, addressed her supporters at an election night party in Brattleboro shortly after.


"We proved them wrong. I was the long shot. I was the underdog," Balint said. "But this campaign wasn’t built on connections. It was built on relationships."

With 95 percent of districts reporting results, Balint had 59 percent of the vote compared to 37 percent for Gray. Balint's decisive victory marked the conclusion of one of the most closely watched races this political season as candidates lined up to compete for a rare opening in the state's congressional delegation. Balint, a former middle school teacher from Brattleboro, would become the first openly gay person to represent Vermont in D.C. if she prevails in the general election in November.

At Hula in Burlington, Gray addressed a much more somber crowd. She huddled with staffers, some of whom were crying, before saying, "Let's go do this" and taking the podium. 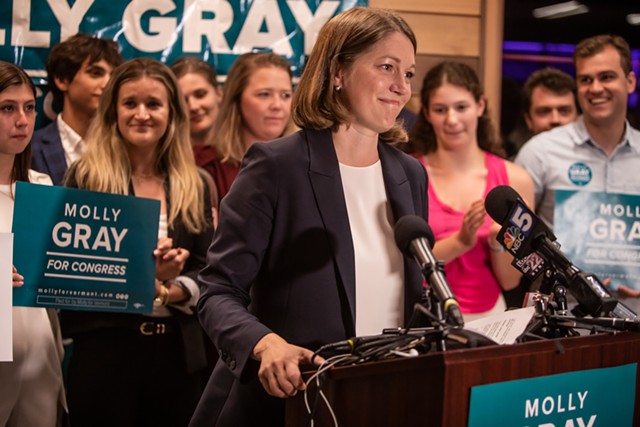 "I can say that, while my disappointment is profound, so, too, is my gratitude for this opportunity," she said. "This was a deeply tough race with incredibly qualified candidates making their case to Vermonters."


"I will always be proud of the choice we gave Vermonters and grateful for the chance to be part of a conversation about the future of this state I love so very, very much," Gray continued. "So thank you. Thank you for coming."


Another Democratic contender, Rutland physician Louis Meyers, was on track to finish a distant third. Sianay Chase Clifford, who dropped out a few weeks ago but was still on the ballot, appeared destined for fourth.

The loss is a first for Gray, who shot onto Vermont's political scene in 2020. A political neophyte then, she entered a crowded Democratic primary field in the race for lieutenant governor and won easily. In December, less than a year into her term, Gray was the first candidate to launch a run for U.S. House.

Balint, Gray and Meyers were the three remaining candidates in the once-crowded field of Democratic rivals for the seat formerly held by U.S. Rep. Peter Welch (D-Vt.), who announced in November that he would run to replace retiring Sen. Patrick Leahy (D-Vt.). Another candidate, state Sen. Kesha Ram Hinsdale (D-Chittenden), dropped out of the race in late May and endorsed Balint — in part, Ram Hinsdale told reporters at the time, to forestall the possibility of a split vote between her and Balint.

Balint, Gray Work to Seal the Deal as Congressional Primary Rolls Into Final Week
By Sasha Goldstein
Politics
After Ram Hinsdale bowed out, Balint and Gray quickly emerged as the top contenders. By Tuesday, both had raked in more than $1 million apiece in contributions and honed their respective campaign narratives. Gray, the more moderate establishment favorite, touted her rural Vermont upbringing and her experience on Capitol Hill in various jobs, including a stint as a scheduler for Welch. Balint pitched herself as the experienced coalition-builder who has successfully negotiated the passage of legislation on the issues she pledges to champion in Congress, including gun control and abortion access.


On Tuesday, Balint addressed supporters just before 9 p.m., saying she had prepared herself for a long night. "We didn't anticipate an early victory," she said.

She talked about how, growing up gay, she couldn't have imagined this triumph for herself: "This is a culmination of everything I was chasing when I was young."

Balint's wife, Elizabeth Wohl, and their two children, Abe and Sarah, stood behind her as she gave her victory speech.

Balint and Gray had staked out similar positions on most major policy issues, though Balint leans more progressive, particularly on criminal justice. As Senate president pro tempore, Balint supported a bill this session to end qualified immunity for law enforcement, which would have opened a legal pathway for victims of police misconduct to seek restitution. (Ultimately, the bill met fierce opposition and passed as a much-diminished commitment to study the issue.) In a recent televised debate on WCAX, Gray said that she was "open to a conversation" about ending qualified immunity, but only if doing so would eliminate the protection for all public servants, such as teachers.

In the August 9 Primary, Democratic Candidates Compete for the Jackpot: Vermont's Lone U.S. House Seat
By Chelsea Edgar
Politics
"The choice Vermonters have is: Do they want to send the next member of 'the Squad' or the Congressional Progressive Caucus to Washington? The next Bernie Sanders?" Gray said in an interview with NBC5 on Monday. "Or do they want to send the next Pat Leahy or Peter Welch? Someone who’s a pragmatic Democrat, who has a track record of working across the aisle?"

Among Gray's most prominent backers were two former Vermont governors, Madeleine Kunin and Howard Dean, and Marcelle Leahy, wife of Patrick Leahy. (The retiring senator never explicitly endorsed Gray, who interned in his office while she was an undergraduate at the University of Vermont, though he cast an early ballot for her and donated $5,000 to her campaign through his political action committee.)

Balint's supporters included many of her Statehouse colleagues and, most notably, Sen. Bernie Sanders (I-Vt.), who joined her for a statewide tour earlier this month and sent an emailed statement on Tuesday congratulating her on her win. In July, Balint received another major endorsement from Sen. Elizabeth Warren (D-Massachusetts), who had supported Gray's 2020 bid for lieutenant governor.

The pair of high-profile endorsements from Warren and Sanders reinforced Balint's appeal to progressive-leaning voters and lent her campaign an extra boost of momentum in the critical stretch leading up to the primary.

Gray and her surrogates repeatedly decried these expenditures as unwelcome interference in Vermont's elections. Balint countered that she has no control over spending by PACs, which are prohibited by law from coordinating with campaigns.


“Tonight voters made their voices heard loud and clear: they are excited about Becca and her compelling vision for Vermont and our country, one founded in courage and kindness," Annise Parker, the president and CEO of the LGBTQ Victory Fund, said in a statement. "For nearly a decade, Becca has worked tirelessly to enact meaningful legislation to increase fairness and equity in her community. Now, she is ready to do the same in Congress.

PACs Pour More Than $600,000 Into U.S. House Race for Balint
By Sasha Goldstein
Politics
Over the last few weeks, Balint and Gray have canvassed the state in an all-out sprint to woo undecided voters. But by early August, the hype differential between their campaigns had become clear: Hundreds of people were gathering in front of Burlington City Hall to watch Balint deliver her stump speech, Sanders by her side, while Gray seemed unable to match the enthusiasm.

Balint echoed Sanders on issues of wealth inequality during her victory speech on Tuesday.


"I will never, as long as I live, accept the unconscionable wealth gap in this country ... Hunger is a policy choice. Homelessness is a policy choice," Balint said. "We can make different choices. The work is not easy, but it can be joyful."

In late July, polls by the University of New Hampshire and the progressive think tank Data For Progress showed Balint leading Gray by a sizable margin — 42 points and 32 points, respectively. While the polls' small sample sizes  may have overstated Balint's dominance, they helped shore up the perception that her campaign was gaining momentum, while Gray's seemed to be flagging.


It’s unclear who might run for the House as a Republican.

Liam Madden, who identifies as an independent, won the GOP nomination, according to a race call from the Associated Press. With 95 percent of the districts reporting, Madden had about 36 percent of the vote, compared to 27 percent for Ericka Bundy Redic and 23 percent for Anya Tynio.

“I will decline the nomination if I win the primary,” Madden, a Marine veteran and anti-war leader, told Seven Days in an email in May. “Regardless of outcome, I will be an independent in the general election.”

He indicated he was running in the GOP primary purely for strategic reasons.

“I am clearly not a Republican,” he wrote. “But, I can see that candidates in primaries get more attention, or at least earlier attention.”

On his Liam Madden for Congress Facebook page, the candidate has engaged in frank dialogue about the fact that he’s an independent running in the Republican primary.

“Let’s free ourselves from the 2 party system,” a graphic on his page reads.

“I am giving [voters] another choice, and if they know exactly where I stand on what is important to them, then that's all that should matter,” he told one person in a public exchange about his status as an independent.

In the U.S. Senate race to replace outgoing Sen. Leahy, current Rep. Welch cruised with some 85 percent of the vote in the Democratic primary. He soundly defeated challengers Isaac Evans-Frantz and Niki Thran.


Welch will face newcomer Gerald Malloy of Weathersfield, a retired Army officer who played off his military service with a campaign slogan urging voters to “Deploy Malloy.”

Malloy received 41 percent of the vote to Nolan’s 35 percent and Mermel’s 17 percent. Nolan tried to appeal to more moderate Republican, hitching her wagon to the style of Gov. Scott, who endorsed her in the race. But Malloy won easily in a primary race with just about 30,000 votes cast.