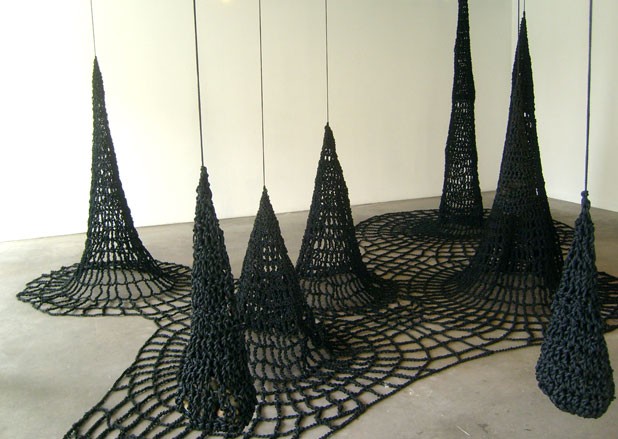 Alisa Dworsky has organized deceptively humble rope and bamboo into a few basic geometric shapes in her exhibition “Drawing Strength,” which opened last week at the BCA Center (formerly Firehouse Gallery) in Burlington. Each of her two installations — “Surface Tension” in the front room of the First Floor Gallery and “Points of View” in the back room — is a remarkable exercise in suspension. But, while her media are kept to a minimum, there’s nothing minimalist about this show. Dworsky crocheted 18,000 feet of thick black rope into the former installation and assembled 100 or so bamboo rods for the latter.

In “Surface Tension,” the crocheted rope forms seven tall, thin cones that will make some viewers think of witches’ hats; their points are held aloft by counterweights, while the broader bottoms of their cones touch the floor and spread out like the train of a wedding dress. At their base the shapes are crocheted to each other, resulting in a single, netlike pattern that sprawls across the central space of the gallery. The spherical counterweights are ensconced in crochet, too, and suspended at roughly (adult) eye level or higher. The physical dimensions of the work force viewers to cluster around its edges, which lends it a less tangible grandeur, as well.

“Surface Tension” is like an odd forest of conifers or thrusting stalagmites, directly relating simple geometric shapes to the natural world. In her artist’s statement, Dworsky writes, “Instead of responding to a landscape outdoors, I am building a couple of landscapes within the gallery walls.” In her remarks at Friday’s reception, she noted that the piece displays the tension between two- and three-dimensional forms.

“Points of View” is a more linear, architectonic piece. Here, bamboo sticks have been assembled into three groups of intermeshed tetrahedra, looking like gigantic pick-up sticks frozen in place. Each tetrahedron is made up of four triangles, and when they are combined in the room-sized installation, they become a jumble of three-sided pyramids. As such, they subtly relate to the cones of “Surface Tension,” but here the geometry is far more complex.

This intricate thicket of bamboo fills the gallery space from floor to ceiling, and Dworsky added reflective blue tape stripes to the sticks that give them the appearance of surveyors’ stadias, or leveling rods. These lines imply an invisible horizon across the piece — Dworsky calls it a “shimmering blue waterline” — and create another contrapuntal rhythm within the installation. It’s especially evident when the viewer regards the installation after dark using the focused beam of a headlamp (available at the gallery), which causes the reflective tape to glow. However, that gimmick is not crucial to experiencing the piece.

It’s no surprise that the adjective “architectonic” describes a Dworsky project such as “Points of View.” After all, the Montpelier artist has a master’s degree in architecture from Yale. The shapes she constructed in “Surface Tension,” albeit softer, are just as architectural as they are sculptural.

Dworsky’s two-dimensional contributions to the show — the “Fine Cord” series in the front room — are prints of nylon cord transferred to aluminum plates. The layered, ghostly, 9-by-9-inch images appear on 19-by-15-inch pieces of paper. “Fine Cord 58” is a knot of gray, yellow and deep violet lines clustered in the center of the picture plane. Other pieces in the series, such as “Fine Cord 65,” seem to be affected by gravity. A bound nexus of textural lines in indigo, yellow and gray opens to let the cord become heaped along the bottom edge of the image.

The German modernist architect Ludwig Mies van der Rohe is associated with the expressions “Less is more” and “God is in the details.” Dworsky seems to take both those statements to heart in her majestic simplicity of materials and complexity of design.