Side Dishes: You knead to get your hands on these 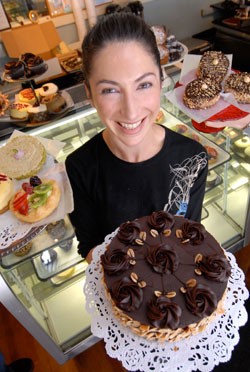 Andrea Chesman of Ripton may not be a household name, but in local foodie circles she’s known for writing cookbooks that make excellent use of Vermont’s seasonal ingredients, particularly veggies. Published in 2007, Serving Up the Harvest: Celebrating the Goodness of Fresh Vegetables is easy to find at local food markets and bookstores.

So fans may be surprised to learn that Chesman’s new volume takes her into much sweeter territory. Coauthored with recipe tester Fran Raboff, 250 Treasured Country Desserts offers key lime pie instead of kale; cherry clafoutis instead of carrots.

Country Desserts is actually an updated version of one of Chesman’s earliest works. “I think there’s a strong trend in publishing right now to get as much mileage as possible out of a book by adding 50 recipes and giving it new life,” she says. “Since the original book came out in 1990, I’ve really specialized in vegetables, but we all need to eat dessert.” Especially when the goodies sound as delicious as Frosted Cream Cheese Lemon Drops and Forbidden Rice Pudding.

Chesman — who also edits and indexes cookbooks and writes for periodicals — is already knee-deep in her next writing venture, scheduled for publication next fall. Its recipes will incorporate “hearty grains, root vegetables, winter squashes, onions and other things that store well,” she says, including “at least a dozen recipes for coleslaw.”

Like your dessert to come with some dishing? The title of Gesine Bullock-Prado’s new tome, Confections of a Closet Master Baker: One Woman’s Sweet Journey from Unhappy Hollywood Executive to Contented Country Baker, says it all.

Within, the petite pastry chef — who happens to be Sandra Bullock’s sister — writes about how she once kept her baking obsession under wraps. “In Hollywood, I’d have had more street cred if I’d revealed that I was a crack-addled, anorexic leper … What kind of weak-minded, carb-consuming domestically minded loser bakes?” she asks rhetorically.

Bullock-Prado eventually came out of the pantry, and in 2004 she opened her very own café, Gesine Confectionary, on Elm Street in Montpelier. The author rhapsodizes about her newly adopted Vermont lifestyle: “We ate well and frequently, we slept in, and we spent hours curled up in leather chairs at the foot of our roaring wood-burning fireplace,” she writes.

But Bullock-Prado also applies her razor-sharp snark as readily to the residents of her new home as to the Hollywood elite. “I slow down at the hippie café, minding the patchy-bearded string beans propping themselves against the bricks,” she narrates. “There’s no telling when they’ll rouse themselves from their weed coma and dart into incoming traffic in search of a drum circle.” Ouch.

Those who want to know why Bullock-Prado sold her bakery (it wasn’t the hippies) and what she’s doing now can find answers in the 226-page memoir. And they can find something else, too. There are 18 recipes, including one for apfelkuchen and one for something called “Orgasm Cake.” If the pecan, chocolate and coffee concoction lives up to its name, that alone might justify the book’s $24 price tag.