Philip, 48, who said he was surprised to receive the award, got home to the Upper Valley from the ceremony at around midnight. He was up at 3:30 Sunday morning to start baking.

"It was quite a turnaround," he said Monday afternoon by phone. "I got in here to bake a bunch of crusty bread ... so you can enjoy a baguette at lunch."

Breaking Bread, Philip's first book, contains recipes as well as stories about his life. The memoir is kind of a "neat circle," he said, that concerns coming home: His great-grandfather, George Philip, was a stonecutter from Scotland who moved to central Vermont to work in the quarries.

"It's [about] beginning in a place and leaving and trying to get back," said Philip, "but using recipes to do so."

Baking and writing share certain properties that have to do with "the nature of craft," he added. "There's a horizon line but no terminus. You just kind of keep trucking." 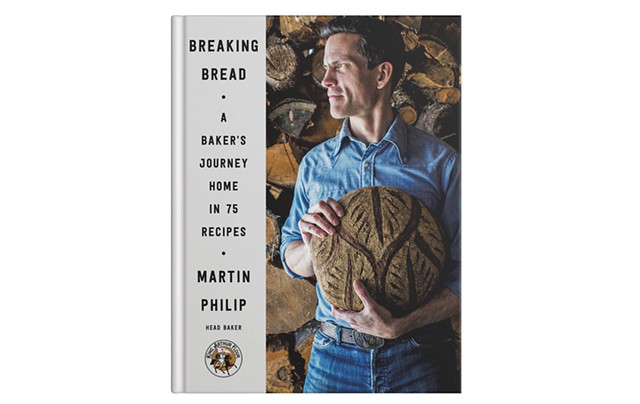 In accepting the honor Saturday, Philip talked about "his hope for a return to a time of strong community," according to VCFA's news release. He was quoted as saying: "Food is a way to get back there. Good words are another way to get back there. We've lived the stories that are in the book, and there are more to come, so I thank you all so much."

In a kind of search for community, Philip intends to take a 52-mile bike ride in rural Arkansas, his home state, carrying with him a basket of ingredients. He plans to knock on doors, talk to the people who live in the homes, and use cooking and food as a point of connection — and a means for telling more stories.

The award, Philip said, "is like a rainy-day fund for when you feel like, I don't know what I'm doing." In those moments, he can remember that someone out there enjoyed his book.

The Vermont Book Award comes with a $5,000 prize and a sculpture carved by Vermont artist Sean Hunter Williams.

The original print version of this article was headlined "Bread Rising"