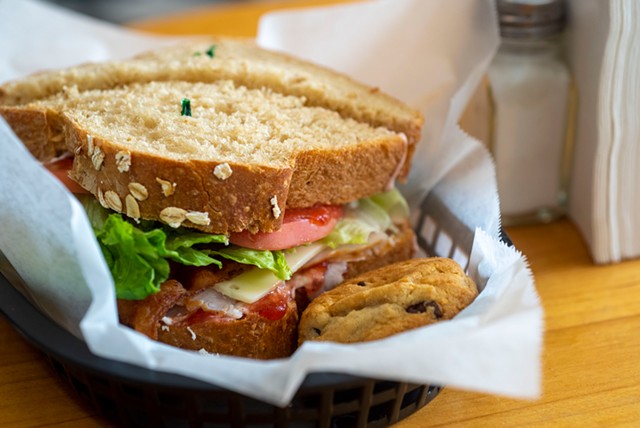 On a day in late August, lunch customers streamed into Thompson's Flour Shop for sandwiches on the Morrisville restaurant's signature home-baked bread. Most of them were as eager to inquire about the newest member of the Thompson family as they were to get their meal.

Ryan Thompson, daughter of the shop's owner, took orders at the front counter with a wide smile and an attitude of steady cheer. "She's a little meatball," she said of the aforementioned new arrival — her 5-month-old daughter, Hunter, who had come to work with her that day and was in the kitchen under the watchful eyes of Thompson's staff.

Ryan, 35, took equal interest in each familiar face to arrive at the counter. "You're huge!" she exclaimed to a teen who had come in with his family. "You're so tall."

The freshly baked bread and pastries aren't the only homestyle offerings at Thompson's, a mainstay of the Morrisville community. Located on a bend of Lower Main Street in the village center, the shop is folksy and warm, with old-fashioned charm oozing from its nooks and crannies like the frosting on its cinnamon rolls. It's no wonder Thompson's has engendered the devotion of diners near and far.

"It's not the greatest bread in the world, but there's something about two hours out of the oven," said Ryan's dad, Keith Thompson, who cofounded Thompson's Flour Shop 27 years ago.

Many customers would argue that he sells Thompson's short. They line up for the restaurant's hearty selection of salads, soups, daily specials, and breakfast and lunch sandwiches. Each of the latter comes with chips, a drink and a homemade cookie.

The pastry case tempts with scones, croissants, turnovers and muffins that taste as good as they look. Thompson's closes at 2:30 p.m., but customers looking for dinner can grab a take-and-bake pot pie from the freezers in the dining room.

The bread is cut thick, but it's soft and airy. In the curried chicken salad sandwich I tried, it held the main attraction tight against the lettuce and tomato. The honey oat bread brought out a slight sweetness in the chicken salad, which was light on spice and studded with grapes and almonds.

"I'm not a chef. I'm not classically trained. But I've been in the restaurant business a long time," Keith said. "The bottom line is: It's really to make money."

Keith didn't start out with a plan to get into the bakery business. He was raised in Boston and moved to Vermont with his now ex-wife, Kathy, in 1983. They both worked as restaurant servers, but after their three children came along, they began looking for extra income. One day, Keith brought some of his wife's home-baked bread to the chef at the Shed Restaurant & Brewery in Stowe, where he worked.

The chef loved the idea of offering locally made rolls, and Keith saw a niche to fill. From their home kitchen, the Thompsons began supplying rolls and bread to the Shed and other restaurants. Soon they were baking for and delivering to individual customers.

In 1994, the couple started renting a space in Morrisville for $500 a month. An $11,000 loan from Union Bank bought them equipment for a bakery and a retail storefront they dubbed Thompson's Flour Shop.

"We made money from day one," Keith said. "We never owed too much. I think one of the problems with restaurants nowadays is a huge debt."

Keith and his wife added a Thompson's Flour Shop in Stowe a few years later, changing its location in 2002, but they found it challenging to operate there and closed it in 2012.

Keith revels in Thompson's success, but he's not sentimental about it. Now 66, he said he's looking forward to leaving the business to Ryan and her brother Zachary. But his succession plan isn't based on any nostalgic desire to see the business carry on his family name.

His focus is on the financials. If he sold to an outside buyer, Keith said, he couldn't get the price he thinks Thompson's is worth. Most banks are loath to lend money to restaurants because so many fail.

To complete such a sale, Keith would have to front the money himself to the buyer, who would then owe him payments. If the new owner let things slide, "then they go out of business, and I've just lost everything I worked for," he said.

By passing the business to his kids, he's giving them a guaranteed income and the power of ownership. And they can keep Keith on the payroll.

"So they don't have to borrow any money," Keith said. "There's nothing hanging over them, so this business goes to the next generation with no debt service, with Keith getting a little piece of the action. And I'm also a resource for them whenever they need me."

Zachary, 31, stays in the back of the kitchen, baking and crafting menus, while Ryan works the front and handles customer service. Another son works in the tech industry in Boston.

"This is my family's business," Ryan said, sitting at one of the small wooden tables in the dining area, with Hunter in a carrier by her side. "I've grown up in the industry. I love the people that come in, the customers, like my second family."

Three years ago, Thompson's moved across the street to its current location in a historic brick building with checkerboard linoleum floors. It's an apt backdrop for the homespun fare and, with its ample front patio for outdoor dining, ideal for pandemic patronage.

Like all nonessential businesses in Vermont, Thompson's shut down in mid-March 2020. It reopened nine weeks later exclusively for takeout, which previously had accounted for about half its business.

Almost immediately, customers queued down the sidewalk. Some people offered Keith cash gifts, expressing worry about Thompson's survival, but he didn't accept them, he said.

Big orders rolled in. Manufacturing Solutions, a nearby company with a few hundred employees, asked for 300-plus sandwiches in a single day — on multiple occasions.

"People really were trying to lend a hand," he continued, "because they didn't want to see us anywhere else. They want to see us succeed. It was just as important to them as it was to us."

After Thompson's received a federal Paycheck Protection Program loan, Keith took the opportunity to change things up. He 86'd some items and streamlined the menu, partly because the sandwich boxes the shop used had become scarce.

"It gave me a safety net because I knew I could have a little more guts with my business, because I didn't have any debt," he said of the PPP. "That money was there, and I knew if I needed it I could draw from it."

One of the biggest changes for regulars at Thompson's was the introduction of packaged sandwich meals with chips, a drink and a cookie for $11.95 — a $4 jump from the sandwich alone that was offered previously. Some diners balked, but others liked the deal, Keith said: "Before you know it, we're doing better sales than we've done historically."

Thompson's also added half a dozen varieties of bake-at-home pot pies: vegetarian leek and mushroom; classic chicken; tourtière (the traditional Québécois meat pie); a decadent seafood option that resembles chowder inside a crust; and a steak pie that Thompson's had to stop making last month because of soaring beef prices.

On Christmas Eve, Thompson's sold 100 pot pies. Keith expanded his staff of three to nine to handle the demand.

"We were setting sales records because of the pot pies," he said.

What Thompson's didn't change was its technological presence — or lack of it. The shop doesn't have a website, just a Facebook page. It takes no orders online, only by phone. An employee checks off the customer's choices on a paper list and submits it to the kitchen. Thompson's didn't even accept credit cards until 10 years ago.

Before the pandemic, Bonnie Bound, who lives in nearby Wolcott, came to Thompson's every week with a friend. When COVID-19 lockdowns set in, she and her husband brought home Thompson's pot pies and soups. They knew small businesses were struggling.

"I prayed for them all the time: 'Don't let Thompson's go under,'" Bound said as she finished a tuna sandwich. "It's just really, really a perfect place."

Her friend Sherry Bell agreed, saying, "Not only is the food good, but the people who work here are so friendly. They're engaged."

Not everyone wants the person who takes their sandwich order to chat them up and ask where they're from and what they're doing in town. Thompson's caters to people who do.

"When you come in here," Keith said, "we're gonna develop a relationship from the very first visit."

The original print version of this article was headlined "Flour Power"